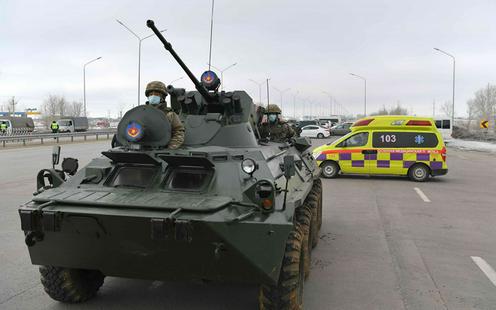 A roadblock in Kazakhstan. Photo from the press office of the Akorda

Kazakhstan will pay a monthly wage to those who have lost their income in connection with the recent introduction of a state of emergency in the country. The announcement was made by Kazakh president Kassym-Jomart Tokayev at a session of the State Commission for National Emergencies, the website of the Akorda reports (in Russian).

In total, 1.5 million of the country’s inhabitants could qualify for the benefit, Tokayev stated. “If required, we have the necessary reserves to increase the amount, the coverage and the forms of support,” he added.

In Almaty alone during the quarantine period, the total number of workers employed by businesses has decreased by 266,000 people. In addition to this, 80% of self-employed entrepreneurs have suspended their business activities. On Friday, the Kazakh authorities announced that businesses and sole traders would be exempted from a number of taxes until the end of the current year. Special preferential-rate loans to a total value of 600 billion tenge ($1.3bn) will also be made available for small and medium-size businesses (at an annual interest rate of 8%)

In other recent developments, Tokayev has ordered a reprieve on loan payments for debtors over the period of the national emergency, and ordered double pay for doctors and police officers forced to work on an emergency footing due to the coronavirus pandemic.

At the same time, President Tokayev has ordered stricter controls over quarantine zones and increased penalties for the violation of emergency regulations.

“At present, the greatest number of new cases of infection in the world are being recorded in countries where strict quarantine measures were introduced too late. In order to prevent an avalanche of new cases, we need to apply stricter isolation measures. On the basis of the constant influx of information on the positive and negative experiences of other countries, we must continue to prepare our healthcare system for all possible scenarios for how the situation will develop,” Tokayev said at the session of the Committee for National Emergencies.

“In the capital and in Almaty, we need to ensure a total lockdown on the quarantine zone, and prevent any possibility of entering the cities on foot. In the coming days, we will need to make decisions on the closure of other major population centres. The time has come to introduce punishments for the violation of demands placed on those who have been put in quarantine. In order to protect public safety, my decree has suspended the activities of all organisations and institutions involving large public gatherings and banned various events. Yet I can see that the bans are frequently violated,” the President said, before citing a number of cases where people have received warnings or been fined. “The time has come to move over to stricter sanctions, and to give these incidents wide coverage in the media in the interest of prevention.”

Tokayev also ordered the temporary closure of all Citizens’ Service Centres (government registration offices) and announced further restrictions on rail and road transport within the country. He also ordered all travellers entering the country from abroad, including from EAEU countries, to be placed in quarantine, and the introduction of home quarantine for “risk group” individuals – which in Kazakhstan includes those over 55 years of age.

According to the latest information on 23 March, Kazakhstan has reported 62 cases of the COVID-19 coronavirus. Uzbekistan has 46 cases and Kyrgyzstan 16. Tajikistan and Turkmenistan are yet to report any infections. On 15 March Kazakhstan declared a national emergency, and on 22 March the two major cities of Nur-Sultan and Almaty were placed under full lockdown.