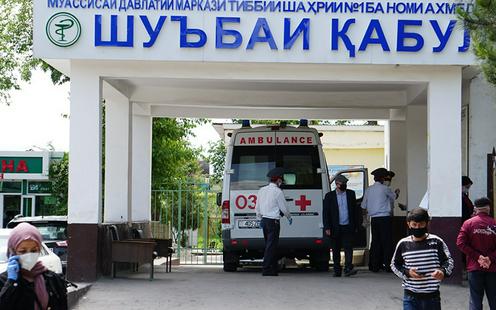 A hospital in Tajikistan. Photo from Asiaplustj.info

Justice Minister Muzaffar Ashuriyon, however, refused to link the rise in the mortality rate to the country’s coronavirus epidemic. “People died not only due to COVID-19,” he said, without further elaborating on what might account for the excess deaths. According to official government figures, only 55 individuals have died from COVID-19 in Tajikistan to date.

An unofficial website run by Tajik activists (and blocked by the authorities inside the country) has meanwhile recorded 437 deaths from the virus.

If the government's official statistics are anything to go by, Tajikistan has had a COVID-19 odyssey like that of few other countries. After declaring its first cases of the coronavirus on 30 April, the day before the arrival of the WHO mission, Tajikistan claims to have hit the peak of its epidemic only two weeks later, on 15 May. The country's death tally, too, shows an unusually precipitous rise in the first half of May, when 41 of its 55 official COVID-19 fatalities to date are recorded as occurring, followed by an almost horizontal line in the two months that have passed since then. 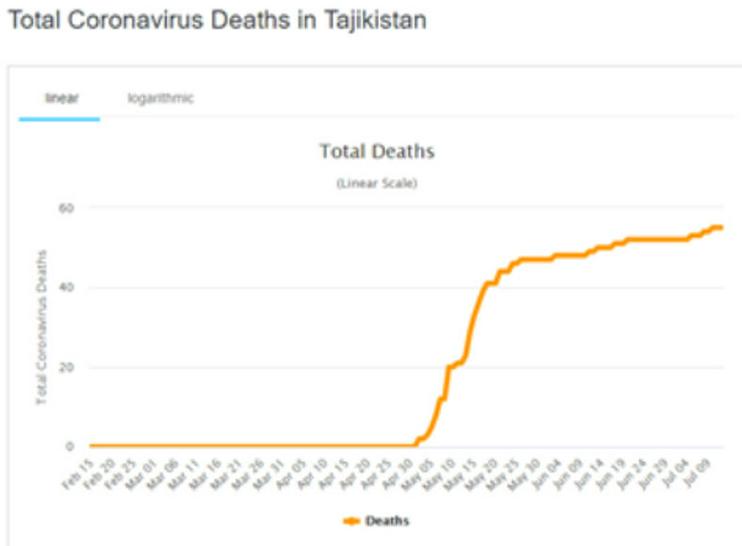 COVID-19 deaths in Tajikistan. From worldometers.info/coronavirus

Since mid-May, the epidemic has been declared under control, the country's «lockdown lite» has been largely lifted, and Tajikistan's healthcare facilities have generally been discharging patients faster than they have been coming in, with two major zigzags in the country's active case numbers where 600+ patients have been sent home within a sing​le day. ''The open question is whether people are being turned away from hospitals and dying in significant numbers, or if they are going home and getting better, as the authorities insist. The truth will almost certainly never be known,'' Eurasianet wrote, assessing Tajikistan's dubious coronavirus ''win'' over a month ago.

The new mortality figures may allow at least a partial answer to this question.