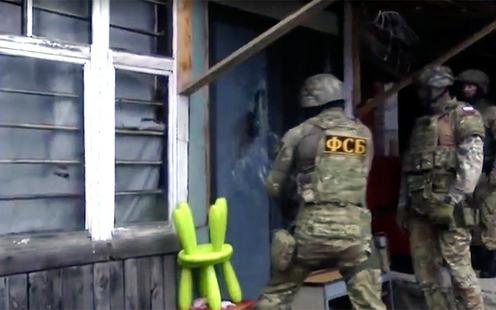 Still image from the FSB video

22 members of the terrorist organisation Islamic Movement of Uzbekistan (IMU, banned in the Russian Federation) have been arrested in the Russian cities of Moscow, Novosibirsk and Krasnoyarsk, the press office of the Russian security agency FSB has announced (in Russian). The arrest of the alleged “leaders and ordinary members” of the IMU was recorded in a video later published by Russian news agency RIA.

“During the course of investigative operations, it was established that members of the cell took part in calls to perpetrate crimes of a terroristic character, recruited and dispatched recruits to active war zones, and sent funds to members of terrorist organisations in the Syrian Arab Republic,” the FSB statement says.

The Islamic Movement of Uzbekistan is an Islamic fundamentalist organisation that grew out of the Islamic Renaissance Party of Uzbekistan, created in 1987 by emissaries from Saudi Arabia, Afghanistan and Pakistan. The IMU itself emerged in its complete form in 1996. The movement was set up by Namangan religious leader Tahir Yuldashev (Yo’ldosh), who fled Uzbekistan in 1993 after the Uzbek authorities charged him with extremism, radicalism and terrorism. The IMU has declared its goal to be the creation of an Islamic state throughout the Fergana valley.

The movement was initially based in the Jirgatol district of Tajikistan and soon launched attacks on Kyrgyzstan’s Batken region. During the civil war in Tajikistan (1992-1997), IMU members took part in armed clashes on Tajik soil. Later they relocated to Afghanistan, where they joined the ranks of the Taliban (the Taliban movement is banned in the Russian Federation). In October 2014, it was reported that the IMU had merged with the Islamic State (a terrorist organisation banned in the Russian Federation) and was carrying out recruitment and training operations in border areas between Pakistan and Afghanistan. The IMU has been designated a terrorist organisation by the governments of the USA, European countries, Russia and Uzbekistan. In 2015, the movement announced that it was dissolving.