«We won’t hand you back to China!» 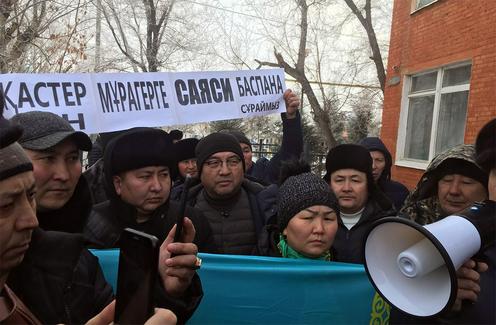 Demonstrators outside the court building. Photo by Bagdat Asylbek, Fergana

On 6 January, in the city court of Zaysan (East Kazakhstan region), the trial got underway of Murager Alimuly and Qaster Musakhanuli – the two ethnic Kazakhs from Xinjiang accused of illegally entering Kazakhstan. Besides the two defendants and their relatives, the first session was attended by several dozen activists from all over Kazakhstan who came to show their support. Fergana’s correspondent reports on what was said during the proceedings and how the trial was abruptly postponed.

An army of activists

Around an hour before the start of proceedings, activists gathered outside the district court building and began live streaming their cries of support for the two refugees on social media. «Kazakhs will never be alone. Our people have always been united and always will be. They (Qaster and Murager) are our heroes! Everyone should be aware of what is going on in China. If everything was okay there then no one would run away! In Malaysia there have been calls to refuse the deportation of ethnic Uyghurs to China! So why can’t we defend our (ethnic) Kazakhs in China?» said activist Nurlan Bulanbayev, who travelled to Zaysan from Almaty.

People came from Aktobe, Aktau and a number of other cities in order to show their support for the ethnic Kazakh pair, but not all were able to make it to their destination. Some of the activists said that their associates from Semey had been arrested en route to Zaysan, on the pretext that their car was to be impounded

Just as the activists inside the courtroom had begun to grow tired of interviewing one another on camera and had started once again to chant slogans from the gallery benches, the two defendants were led into the room. They were met by an ovation. Cries of «Qaster, we’re with you!» and «We won’t hand you back to China!» filled the air, with activists stretching out their hands to the accused through the gap in the glass enclosure covering the defendants’ dock. 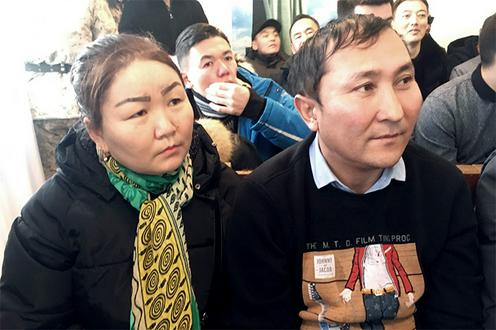 Survivors of the «re-education camps» who were present at the trial. Photo by Bagdat Asylbek, Fergana

Before the start of the session, the defendants’ lawyer Lazzat Akhatova requested that the court hear testimony from witnesses with first-hand experience of the Chinese «re-education camps» and who, she said, could confirm that Alimuly and Musakhanuly had been subjected to torture during their time there. State Prosecutor Erzhan Azimbayev asked the judge to decline her request on the grounds that it bore no relation to the case at hand. Shynar Ospanova promised to give her answer later in the session, but on 6 January these witnesses’ testimony was not heard.

At the start of the session, Prosecutor Erzhan Azimbayev read out the charges against the two ethnic Kazakhs. According to case-file materials, at 7:32 pm on 2 October 2019, the accused pair illegally crossed section 28 of the Kazakh border, guarded by military unit 2017. Entering the region of East Kazakhstan, the two Chinese citizens spent the night in the locality of Shilikti and on 4 October arrived in Nur-Sultan. On 9 October the refugees travelled to Almaty and went to the office of the human rights organisation Atazhurt Eriktileri (Volunteers of the Fatherland) and recounted how they had been victims of persecution in China.

The pair’s lawyer asked them to tell the court their reasons for fleeing Xinjiang. «At the end of August 2019, the police called me in. Twice they called me in. They said the reason was that I hadn’t been going to the bayrak (singing of the Chinese national anthem – Fergana) in the mornings and to study sessions in the evening. I didn’t go because I had my ageing parents, my wife and my five-year-old son to take care of, I had to work to feed my family. Everyone is made to go to the bayrak, it’s obligatory. If you disobey then they lock you up in one of the camps and you can be tortured,» Murager Alimuly stated from the dock. «Kazakhs who live there are up against a brutality that’s hard to put into words. Qaster, you tell them…» 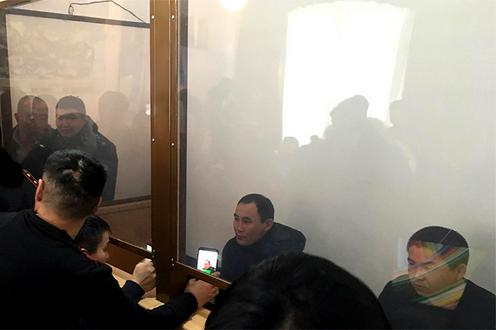 «The Chinese authorities try to stop us Kazakhs and Uyghurs from speaking our own language, from praying,» came Qaster’s voice, louder and more self-assured than his companion. «Every evening of every day everyone (all members of ethnic minorities – Fergana) has to go and study Chinese for two hours, whatever their age. Anyone who misses a class gets punished. Between March 2013 and November 2017 I was in prison for five years. After I was released, I gave Chinese lessons. I told people [other members of ethnic minorities] that everything was fine in the camps, I tried to hide the bad stuff. If we did this then they wouldn’t beat us and for a while they stopped harassing us. But at the end of August 2019, Murager and I were called in twice, and they locked us up for 24 hours. At the end of September they told us that they were going to lock us up in one of the camps yet again. So then we decided to flee to our historical fatherland».

Both of the accused say they have left their families behind in China. «Through my brother-in-law I heard that they had beaten my parents and that my wife had had a miscarriage. They had tortured her,» said Murager Alimuly.

The first half of the session was taken up with questions from the pair’s lawyer and from the state prosecutor. The prosecutor was mostly interested in how the accused had crossed the state border and why they didn’t enter Kazakhstan legally. The pair answered that from 2014, under the threat of incarceration in «re-education camps«, Chinese authorities had begun taking away the ID documents of ethnic Kazakhs in Xinjiang, «forcing them to sign that they were giving up their documents voluntarily». Those who had spent time in the «re-education camps« were banned from leaving the country for five years. Because of this, the pair explained, there was no possibility of leaving the country legally.

Prosecutor Erzhan Azimbayev stated that at a meeting between officials of the Kazakh and Chinese border services on 22 October, the Chinese side had presented information according to which Qaster had been sentenced to jail three times. «In 2008, one year for theft. In 2011, eight months, in 2013, four years and eight months. In April 2019 you borrowed 500,000 Yuan (around $72,000) from some people and didn’t return it,» the prosecutor read out. 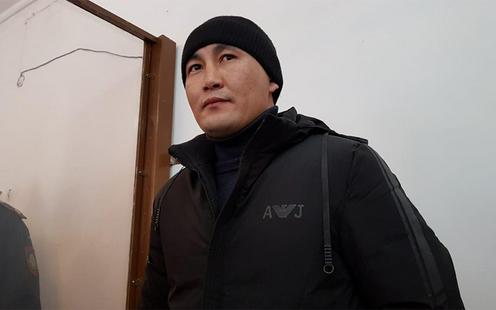 Musakhanuly also said that in 2009 he was accused of taking part in the Uyghur riots in Urumqi, even though at that time he had been in his home village following the death of his father. «Before this time I had lived in Urumqi for three years, and my presence there was captured on camera. This served as the basis for the accusation. Since I didn’t have any hand in this crime, I didn’t confess. But they had decided to convict me for alleged participation in the riots and didn’t want to let me go. So I took the blame for a livestock theft. If I had been convicted of political crimes then the punishment would have been far heavier, even the firing squad. I was looking at a minimum of 10 years. So I had to confess to the theft,» explained Qaster Musakhanuly, adding that while serving time in a camp «for theft» together with other inmates convicted of lesser offences, he acted as a translator for political prisoners.

The prosecutor stated that Qaster had already crossed the Kazakh border one time back in June 2006. Qaster confirmed this and said that he was young at the time and had been following an older friend, but emphasised that he had no intention then of fleeing to Kazakhstan.

Murager Alimuly then asserted that no one had shown him the way to Kazakhstan when he chose to flee. «Where I live, there’s a mountain. From the peak you can see Kazakhstan». Asked by the prosecutor whether he knew that Qaster had already crossed the border on a previous occasion, Murager answered in the negative. «I only found out when we came to Kazakhstan,» he said.

The state prosecutor was also interested in why Qaster had got divorced. Qaster answered that when he was sentenced to five years, he «got a legal divorce in order to avoid exposing my wife and child to danger and to prevent my wife being interrogated».

The testimony of a number of other witnesses was then heard, including border guards involved in responding to a border barrier alarm that was triggered when the pair crossed, and Murager’s sister who is a resident of Kazakhstan. After this, the judge abruptly announced that she was ending the session and scheduling the following session in the ethnic Kazakh pair’s case for 21 January, since another case was due in the same court that afternoon. The court’s official schedule for 6 January, however, showed only case that day – that of Qaster Musakhanuly and Murager Alimuly. 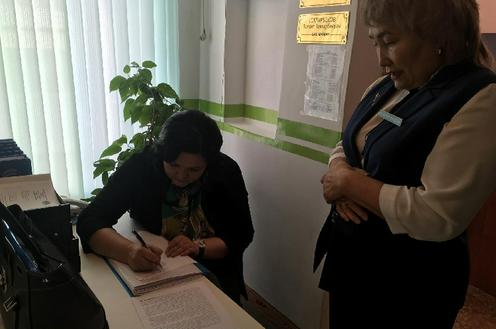 Defence lawyer Lazzat Akhatova and the other attendees were angered by the decision, since nearly all of them had travelled a long way to be present at the trial. Akhatova filed a recusal motion against the judge, demanding that the trial continue into the afternoon session. «I am extremely disappointed by today’s proceedings. The judge has allowed a number of irregularities. First of all, she should have taken into account that many people in attendance had travelled from far away. In this kind of weather it’s not easy to get to Zaysan. She should have had some respect for this and listened to people’s opinions and continued the session at least until the evening,» Lazzat Akhatova said to Fergana. «Also they didn’t give witnesses a full hearing. They didn’t even allow the defendants’ one legal representative to speak. I wasn’t given the chance to present evidence. The judge should have taken all the evidence in the first session and thoroughly studied it for the following session. Over the course of an hour and a half she several times announced a break».

Akhatova declared that she would file a complaint against the judge at the Supreme Court.

Meanwhile, dozens of activists continued to express their anger in front of the court building. The head of the Zaysan administration’s internal political affairs department Nurlybek Kalibayev approached the demonstrators, calling on them by loudspeaker to stop their «illegal actions and go home, since the local authorities have not given permission to hold a public meeting». The activists surrounded him and started explaining that they were not holding a public meeting and that he has no right to forcibly disperse people who have gathered peacefully and without weapons.

Musakhanuly and Alimuly’s escape from Xinjiang was made public on 14 October at a press conference in Almaty, during the course of which the pair announced their intention to seek asylum in their historical homeland. According to them, they had fled Xinjiang due to the Chinese authorities’ oppression of ethnic minorities. The pair were later taken into custody.

State persecution of local inhabitants based on religion (adherence to Islam) or ethnicity has increased in recent years in north-western China’s Xinjiang Uyghur Autonomous Region (XUAR). The Chinese government justifies its measures with the need to fight a war against terrorism. According to Human Rights Watch, up to a million people may be incarcerated in the government’s «re-education camps» in Xinjiang.