The cemetery for deceased coronavirus patients in the Almaty region (Christian section). Photo from RFE/RL

As the COVID-19 pandemic moves towards its fourth month and countries edge further along their respective curves, coverage of the virus has taken on an increasingly comparative, and often polemic, tone – not least due to the fact that different countries use different systems to count deaths. Sweden has earlier defended its relatively high mortality rate by pointing out that, unlike many other countries, its statistics include deaths from nursing homes for the elderly. Belgium has explained its leading position for deaths per capita by the fact that it is the only country to include deaths in care homes that are merely suspected, not confirmed, as being down to COVID-19.

Besides the long-running debate on the reliability of China’s statistics, probably the most well-covered recent polemic has centred on Russia’s unusually low mortality rate. Under the Russian system, deaths are only counted as COVID-19 fatalities if pathologists conclude that the virus played a direct role in the patient’s death. Health officials in Moscow have defended their methodology is the most precise, but have also admitted that this has led to mortality statistics about a third what they would have been under the general European approach of counting all those who have tested positive. Critics have also suggested that it facilitates the manipulation of data during and after post-mortem.

As far as the accuracy of this method goes, increasing evidence of the complex nature of COVID-19 suggests that even the best-intentioned post-mortem methods may drastically underestimate the new virus’s role in fatalities. Ultimately, as many have pointed out, the most trustworthy method will be comparing countries’ total mortality statistics from all causes with equivalent periods in previous years. Significantly, where such an “excess deaths” approach has been applied to existing data, only in the case of Belgium have the results suggested that the authorities are not undercounting (with results often several times higher than reported figures).

What about the situation in Central Asia? With the very likely exception of Tajikistan (which acknowledged COVID-19 cases only one month ago and already has the highest number of deaths in the region, while testing and transparency remain extremely low), on paper the countries of Central Asia are doing very well. To date, Kazakhstan has recorded 11,308 infections and 41 deaths, Uzbekistan has had 3,673 official case and 15 deaths, and Kyrgyzstan 1,817 cases and 16 deaths – meaning mortality rates are significantly below even that of Russia. Testing levels have been mixed, but, according to official reports, not at all bad by global standards – Kazakhstan leads the way regionally with 44,000 tests per million population (not far behind Germany), while Kyrgyzstan and Uzbekistan are on 17,000 and 13,000 respectively. All three countries are now showing a new rise in cases as they relax lockdown measures, but still, on paper it is an impressive performance.

All three governments have explained this apparent success as the result of – as the oft-repeated phrase on state TV broadcasts goes – “timely measures”. All three were indeed quick to close their borders after the first imported cases were confirmed, and introduced early and extensive lockdowns, alongside large-scale quarantining and contact tracing. The issue of how the authorities are counting COVID-19 deaths, however, has received considerably less coverage. It is only over the last week or so, and only in Kazakhstan, that some interesting insights have begun to emerge.

Responding to a question from the Kazakh news outlet Vlast at an online press conference on 19 May, deputy health minister Lyudmila Byurabekova stated that: “All cases that result in deaths, where there has been a COVID diagnosis, are currently being investigated. At present our official statistics show 35 deaths from the coronavirus infection. As soon as all lockdown measures are over and we have fully worked through the entire list of fatalities then of course all figures will be published and entered into the official statistics – both those who have truly died from COVID and those who died from serious illnesses but also had COVID infections.”

This has not been the first indication that Central Asian medical authorities are – perhaps unsurprisingly – measuring “the Russian way”. At the end of April, the Kazakh health ministry announced that it was setting up special regional commissions to look into all fatalities involving the coronavirus, which would determine whether the patients died from COVID-19 or from other causes. Since then, Vlast writes, the ministry has reported at least 5 deaths involving patients who had been diagnosed with the coronavirus but where specialists determined that the cause of death was not the virus itself but rather other ailments.

In Kyrgyzstan the authorities have at times stated that COVID-19 patients who have died were being sent for further post-mortem examinations to establish whether the virus was indeed the true cause of death. Fergana’s editors for both Kyrgyzstan and Uzbekistan, though, say there have been no publicly-announced cases to date of a coronavirus patient being excluded from COVID-19 death figures.

Several things about the Kazakh statistics, however, remained confusing. Vlast said that, at the time of writing, they had been asking the country’s health ministry for the past three weeks whether these five cases were the only such cases or whether there were others, and they had still not received any reply. The outlet also pointed out that the country’s statistics at the time – 6,751 total infections, 3,247 active cases, 3,469 recovered and 35 deaths – strangely leave no place for these five cases (or any others) where patients had been diagnosed with COVID-19 but their deaths were ascribed to something else. 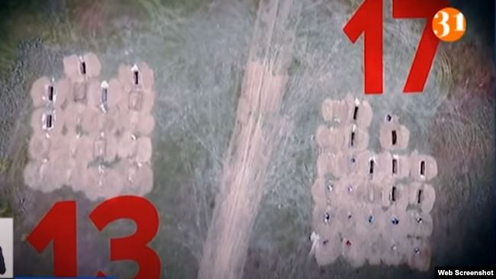 A partial answer to Vlast’s question came just two days later, though not immediately from the authorities themselves. On 21 May, a local TV station in the Almaty region, 31 Kanal, broadcast drone images of a special cemetery in the village of Karaoy, 50 km from Almaty, which the municipal authorities had set aside for deceased COVID-19 patients. While Kazakh statistics were then indicating 10 coronavirus deaths in total for Almaty and its wider region, 31 Kanal’s images showed that the number of graves at the site were three times as high. When RFE/RL’s Kazakh service Azattyq’s correspondents on 25 May, they counted 32 graves.

The same day as Azattyq published its report, the Almaty authorities announced that 22 individuals buried at the Karaoy site were patients for whom COVID-19 had been judged to have been an “accompanying” diagnosis but not the ultimate cause of death. Had Almaty been using “European” methods of counting coronavirus fatalities, in other words, its death tally would have been over three times as high as it officially was.

How generalizable this example is is of course difficult to say (though it is interesting to note that such an approach in Russia too seemed to have led to a mortality rate one third as high as simply counting COVID-19 patients who die). The head of one central government committee in Kazakhstan told Azattyq that there had been no central recommendation for regional authorities to bury COVID-19 patients in a separate cemetery and that such decisions are taken by the local authorities themselves, so rather than counting graves, Kazakhs will have to wait for the special commissions to report back “as soon as all lockdown measures are over” (whenever that is).

As for the accuracy of recording COVID-19 fatalities in this way, final judgement on this will, as mentioned, have to await large-scale comparisons based on excess deaths.

On 29 May, Tajik deputy health minister Mirhamuddin Kamolzoda told Sputnik that Tajikistan was working on complying with «new WHO guidelines» (presumably he means the guidelines from 16 April, according to which «COVID-19 should be recorded on the medical certificate of cause of death for ALL decedents where the disease caused, or is assumed to have caused, or contributed to death»). «We are working on these figures,» the deputy health minister said. «There are indeed cases where COVID-19 patients have died from accompanying illnesses. We are currently gathering together these cases and we will soon update the statistics in line with the new recommendations from the WHO."