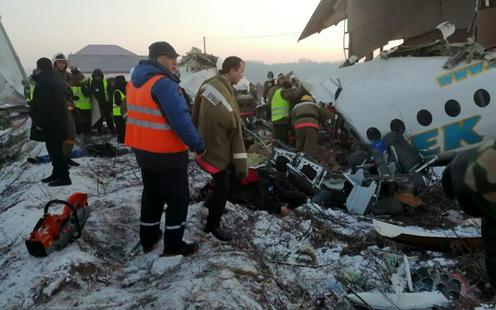 At the crash site. Photo from Zakon.kz

The formation of ice on the aircraft is currently being treated as the most likely cause of the deadly plane crash near Almaty last month. Deputy Prime Minister of Kazakhstan Roman Sklyar made the announcement at a briefing of the Central Communications Service, Fergana’s correspondent reports.

The Deputy PM stated that the commission investigating the causes of the disaster had explored four possible scenarios for the crash. “The first is a violation of regulations on commercial loading and alignment of the aircraft. The second is the influence of external factors such as weather conditions, wind shear, wingtip vortices and icing. The third is pilot error, and the forth a technical failure,” Sklyar read out.

With respect to the first scenario, he said, there had been no violation. “With respect to the second set of possibilities, strong winds were recorded at the time of the flight, at a direction of 130-140 degrees and a speed of 1-2 metres per second. In such conditions, based on the speed and direction of the wind and the time interval between take-offs (110 seconds), the wingtip vortices are estimated to have moved no less than 150 metres to the left of the runway, and thus could not have either caused or affected the development of an emergency situation. Besides this, between 19:00 on 25 December and 07:00 on 27 December, no reports were made by any flight personnel concerning wind shear or any other dangerous conditions. No wind shear was noted,” said the Deputy PM.

At the same time, he emphasised that “the commission cannot rule out the formation of ice on an aircraft that had stood at the airport for a long period, from 24:00 on 25 December to 08:00 on 27 December”.

According to the Deputy PM, the de-icing of the aircraft with anti-icing fluid was only partially carried out. “The chief pilot ordered that only the stabilisers of the aircraft should be treated with type 1 anti-icing fluid. The wings were not treated. In the period between 01:00 and 07:00 on 27 December, five aircraft at Almaty airport were treated with de-icing fluid and five others were not treated. It has also been established that on 27 December, the full de-icing of the Bek Air aircraft that departed at 5:30 am on the Almaty-Atyrau route was not undertaken. This is the flight under investigation by the committee,» he announced.

With respect to the remaining scenarios, Sklyar said, the commission would continue its work in cooperation with experts from the Interstate Aviation Committee and the Dutch Safety Board.

To date, the commission has also been able to establish that the flight crew’s rest time ahead of the flight met the requirements of the relevant guidelines and procedures related to flight preparations were carried out in accordance with civil aviation regulations.

“During the pre-flight inspection that followed engine testing, nothing unusual was noticed by the flight crew or by technical staff. Maintenance manuals for engines, electronic systems and equipment were studied carefully. The aircraft was fully ready to fly,” Sklyar added.

The Fokker 100 aircraft of the Kazakh lowcoster Bek Air, flying from Almaty to Nur-Sultan, crashed in the early morning of the 27 December. On board were 93 passengers and 5 crew members, and 15 people lost their lives. Almost all of the surviving passengers received hospital treatment for injuries of various levels of severity.

Flights by the airline Bek Air and all flights by Fokker 100 aircraft were suspended in Kazakhstan following the accident.