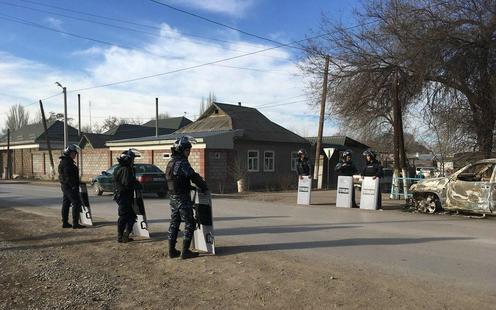 In Kazakhstan, a number of regional and district officials are to be removed from their posts following the recent disturbances in the south of the country. President Kassym-Jomart Tokayev decreed the dismissals himself, according to a press release from the president’s office.

The head of state has ordered the dismissal of Jambyl region’s deputy head of social affairs, Slushash Kurmanbekova, and the head of Korday district Bolatbek Batole “for serious dereliction of duty”.

In a previous statement on the events in the south of the country on Twitter, the Kazakh president had written that “the bloodshed was the fault of provocateurs, aided by the acquiescence of state employees, and they will be punished”.

The conflict in the Korday district of Jambyl region – in an area with a large population of the country’s Dungan minority – erupted in the afternoon of 7 February. According to the official government version, the cause of the conflict was a roadside argument that developed into a fight. By the evening, as local resident and chairman of the Dungan Association of Kazakhstan Husei Daurov told the media, groups of people began arriving the main Dungan settlement of Masanchi and started attacking local residents and setting houses and vehicles on fire.

The police quickly asserted that the conflict had been contained and the situation brought under control. This was confirmed by the country’s president himself, who announced that a “mass brawl” had occurred but that the police had already “restored normalcy”. At the same time, however, information spread in the media and on the internet that the disturbances were continuing and had spread to neighbouring villages, and that those involved were setting buildings and cars on fire, attacking local residents, and even using firearms (talk also spread of an interethnic conflict, something not mentioned in official pronouncements).

Only on the morning of 8 February, Daurov stated, following the arrival of army units from Almaty, was the situation truly brought under control. According to him, if the military had arrived earlier then much of the carnage could have been avoided. Explaining the delay, the Kazakh interior ministry later announced that it had taken time to send reinforcements from other regions.

10 people were killed in the rioting, and more than 170 others required medical attention (according to the latest information on 10 February, 43 people remain in hospital). More than 30 residential buildings and stores suffered extensive damage and dozens of vehicles were destroyed. Many residents of villages targeted in the rioting fled into neighbouring Kyrgyzstan. Later, they began returning to their homes. The authorities promised aid to the victims and pledged to rebuild the destroyed buildings.