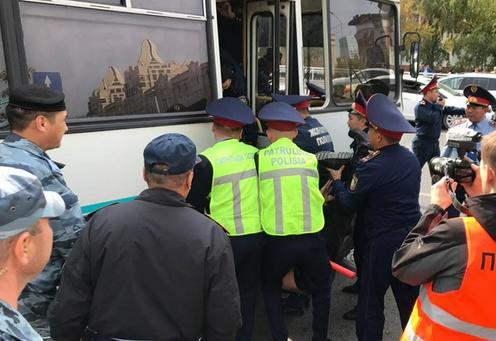 An arrest at a demonstration in Kazakhstan. Photo from azattyq.org

The Office of the Prosecutor-General in Kazakhstan has called on members of the public not to participate in illegal demonstrations, reminding them of the administrative and criminal penalties for organising and taking part in unauthorised public gatherings. A statement to this effect by Deputy Prosecutor-General Bulat Dembaev has been published on the department’s website (in Russian).

“In spite of previous statements by the Office of the Prosecutor-General, some people on social media, including people outside of the country and supporters of the banned extremist organisation Democratic Choice of Kazakhstan (DCK), continue to call on the Kazakh public to participate in illegal demonstrations. We call the public’s attention to the fact that, due to M. Ablyazov’s public calls for the violent overthrow of the government and the seizure of state power, and for the incitement of social discord, the courts have declared the DCK an extremist organisation,” Dembaev stated, underlining that the DCK’s activities were prohibited throughout the country.

The statement ends with a call to members of the public not to succumb to provocations, to rigorously observe existing legislation, and to avoid participation in illegal public events.

The DCK’s leader Mukhtar Ablyazov called on his supporters to attend a demonstration on 22 February. The organisation has planned protests in more than 20 cities around the country. The leaders of the Democratic Party of Kazakhstan have also announced their intention to hold a demonstration on 22 February. They plan to protest against the arrest of a number of their members and supporters.