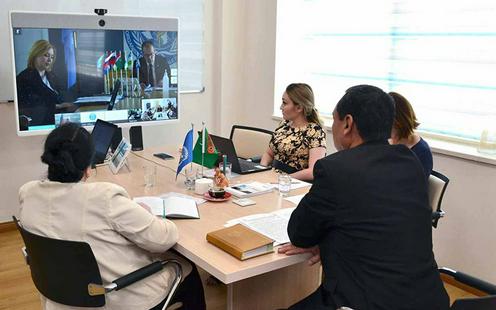 Talks ahead of the WHO mission to Turkmenistan . Photo from Mfa.gov.tm

In advance of the WHO’s upcoming visit to the area, the authorities in the Turkmen city of Turkmenabad have discharged all patients from the quarantine camp and the special section of the city’s infectious diseases hospital where people considered at risk of having contracted the coronavirus were being held, independent outlet Chronicles of Turkmenistan reports (in Russian).

The news site writes that the majority of these patients, who are either individuals who have arrived in the country from abroad or who for other reasons are judged to be at risk of having contracted COVID-19, have been released into home quarantine. A number of others have been transferred to an isolation ward at a psychiatric hospital in the Garashsyzlyk district. Medical staff at the Turkmenabad camp and infectious diseases hospital have been trained in coronavirus prophylaxis and modern equipment and PPE brought in to the two facilities, along with brand-new bed linen. The equipment has been set up ready for the WHO visit, and medics have been ordered not to touch the PPE until the delegation arrives, according to one source.

At the same time, Lebap velayat medical staff have been warned to expect staff layoffs. Each medical department has instructions to fire two staff members, preferably from among those who have worked there for less than seven years. In order to avoid conflicts, medical workers are planning to draw lots. Previously it has been reported that, following President Gurbanguly Berdymukhamedov’s visit to the area on 9 June, staff numbers in district administrations and government agencies in the Lebap velayat are to be significantly decreased.

The Turkmen authorities continue to insist that the country is among less than twenty states around the world (mostly isolated island states, plus North Korea) where cases of COVID-19 are yet to be detected. Independent media outlets, however, citing various sources inside the country, have on multiple occasions reported that the virus has in fact already made it to Turkmenistan. On 22 April, Turkmenistan’s foreign minister, Rashid Meredov, acknowledged that there were two camps in the country for the quarantining of people arriving from abroad – one in Turkmenabad and one in Turkmenbashi. Meredov, however, assured his audience that there were no cases of infection in the country and invited foreign diplomats who wished to do so to visit the camps. The following day, the WHO announced that it would be dispatching representatives to both Turkmenistan and Tajikistan (which at the time also denied that the virus was present in the country).

The Tajik government confirmed its first cases of COVID-19 the day before the WHO mission’s arrival. The WHO had planned to send the same team to Turkmenistan immediately after the completion of its work in Tajikistan, but negotiations with the Turkmenistan authorities stalled. On 3 June the director of the WHO’s European regional office, Hans Kluge, announced that the visit would take place within the following two weeks. Meanwhile, the organisation Deep Knowledge Group has declared Turkmenistan the most unsafe country in Central Asia from the point of view of the coronavirus. Turkmenistan occupied 131st place in the global ranking. Kazakhstan came in 71st position, Kyrgyzstan 103rd, Uzbekistan 121st, and Tajikistan 124th.

The quarantine camp in Turkmenabad was earlier destroyed by a hurricane that passed through the area at the end of April. State media made no mention of the catastrophe in the Lebap region, with the hurricane being covered only by independent media outlets. It later emerged that the camp had been reconstructed and even improved – instead of bunkbeds borrowed from the military, beds have been brought in from hospitals. During his visit to the region on 9 June, Berdymukhamedov spoke neither of the hurricane nor of COVID-19 but instead toured the fields and spoke with farmers about the coming harvest.