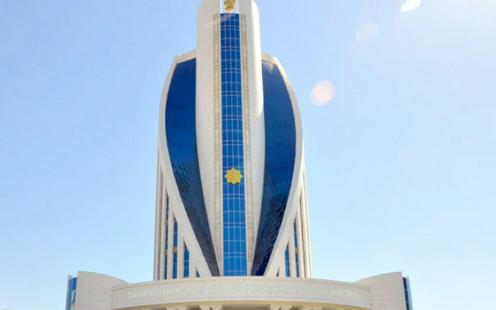 The headquarters of the Turkmen Ministry of Health. Photo from Arzuw.news

The press office of Turkmenistan’s Ministry of Health and the Medical Industry has announced that wind-borne “pathogenic substances” have been blown into the country and may pose a risk to public health, and for this reason the wearing of medical face masks is now “strongly recommended”. The announcement has been republished by state news agency TDH (in Russian).

Update: an operator working for the Turkmen health ministry's hotline has since told Fergana that, as of 13 July, wearing face masks in public places in Turkmenistan is now obligatory. Turkmen.News has reported that police cars are patrolling the streets of Ashgabat and warning people through loudspeakers not to leave their homes without a face mask. How the new policy will be policed and what sanctions will be applied for those who do not follow it the operator was unable to say.

As we wrote last week, pro-government media outlets have earlier explained a new requirement for public transport workers and some other service sector employees to wear masks (which of course coincided with the arrival of the WHO mission to the country to check on the alleged absence of the coronavirus there) as being due to “wind-borne dusts”. Previously, the population has been banned from wearing face masks. It was also reported that coronavirus patients are being moved to different facilities and hidden from the WHO team.

The health ministry now seems to have lent official backing to such meteorological explanations. “Following air quality tests conducted over recent days in the city of Ashgabat and the regions, abnormally high levels of dust were recorded due to air currents entering the country from the south-east, north-east and north. This is harmful for human health, particularly for the respiratory system,” the health ministry announcement states.

In connection with this, the health ministry has advised strengthening prophylactic measures and recommended the wearing of medical face masks, to prevent “dust and, therefore, pathogenic substances” from entering the upper respiratory tract.

“It is also necessary to remain at a safe distance from one another – at least 1 metre, and follow personal and public hygiene rules,” the statement continues. People are also advised not to stand under operating air-conditioning units and not to drink ice-cold water. How any of this is connected with dust is not mentioned, and the words “coronavirus” and “COVID-19” do not feature in the announcement at all.

In recent days, Turkmen TV has started to broadcast songs about wearing face masks, something for which people in the country have previously been fined.

Opposition website Turkmen.News yesterday published a photo of the WHO mission conducting a poolside mission at a hotel in Ashgabat. In partial contrast to previous reports of Potemkin hospitals, the outlet’s sources in the Lebap region have stated that the Turkmen authorities have acknowledged the presence of COVID-19 cases to the WHO team and allowed them to see some patients and familiarise themselves with their case history, but are maintaining that “the situation is not so critical”.

Neither the WHO mission nor the organisation’s European regional office have yet made any statements since the team’s arrival in Turkmenistan. Pro-government news website Orient has previously stated that the results of the mission will be announced at a press conference this Wednesday, 15 July.