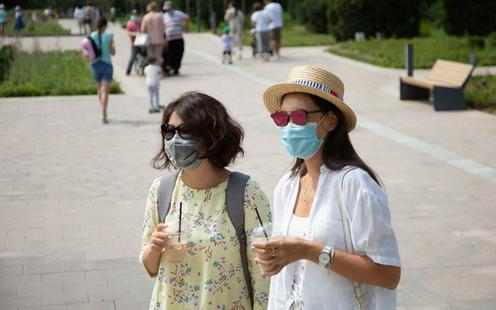 Kazakhstan’s second lockdown will continue until the end of this month, President Qasym-Zhomart Toqaev has announced on Twitter (in Russian).

The current lockdown was initially scheduled to last for two weeks between 5 and 19 July, though it was stated at the time that it could be extended. The Kazakh health ministry had previously calculated that a month-long lockdown would be the best way to avoid a catastrophic collapse of the country’s health system by late summer.

“In connection with the epidemiological situation in the country, the lockdown will be extended for a further two weeks. The decision will be taken by the government commission tomorrow. The lockdown is necessary in order to safeguard public health by ensuring people observe strict measures of self-protection,” Toqaev wrote.

The President added that the first signs are starting to emerge of a stabilisation of the virus situation and that such a development needs to be consolidated. He also wrote that Kazakh citizens in need would be paid a 42,500 tenge (around $100, equivalent to the minimum wage) allowance for July in connection with the extension, as was done during the country’s first lockdown between March and May.

The Kazakh education ministry has also announced today that schools, colleges and universities will continue to operate by distance learning when the new academic year starts in December. The measure is currently planned to remain in place for the first quarter of the academic year.

Meanwhile, the editorial offices of seven Kazakh news outlets have decided to join together to draw up their own list of coronavirus fatalities after stating that they do not consider the official figures to be reliable. The journalists plan to themselves gather and verify data on COVID-19 deaths and publish them on the website Umytpa.kz, Fergana’s correspondent reports.

In their joint declaration, the seven collaborating outlets The Village Kazakhstan, Vlast.kz, Mediazona Central Asia, Factcheck.kz, RFE/RL’s Kazakh service Azattyq, Za nami uzhe vyekhali, and Til kespek zhoq explained that they were launching Umytpa.kz (which in Kazakh means “Don’t forget”) so that the Kazakh public can find out the true situation and the number and names of victims of COVID-19.

“The official statistics on COVID-19 fatalities inform us that 375 individuals have died during the course of the pandemic. Yet we also see that people are dying in far greater numbers than this, and they are dying of pneumonia, with COVID symptoms. We have had problems with testing, and at one point there were no PCR tests available at all. (...) In addition to this, the health ministry confused everything by first counting symptomatic and asymptomatic patients together, and then separately. All this creates a huge amount of doubt about the real number of COVID-19 infections and even more so about the real number of deaths. For this reason, for us as citizens it is important to understand what is going on and to make sure that those who have died during the pandemic are not forgotten,” Factcheck.kz’s editor-in-chief Pavel Bannikov told Fergana.

His colleague, Vlast.kz general director Vyacheslav Abramov added that the outlets’ goal is not to verify the health ministry’s statistics, but rather “to gather as much information as possible about those who have died from COVID in Kazakhstan”. “This may be done through journalistic investigations on the part of individual news sites, but we have decided to make the data open and available to all media outlets,” Abramov said.

Information on fatalities will be added to the list in one of two ways, The Village Kazakhstan general director Aisana Ashim explained. Data can be taken directly from official government statistics on coronavirus and pneumonia deaths and from announcements made by companies and organisations whose employees have passed away or by trustworthy news outlets. Such cases will then be cross-referenced to ensure that they have not already been included. Secondly, internet users can send in their own information about deceased relatives and loved ones, including which COVID-19 symptoms they had and their official cause of death. Further proof, such as documents confirming death, will also be required, but will not be published on the site. “We understand that there may be attempts to deliberately add people (erroneously) to the list in order to frame us or simply as an inappropriate joke. For this reason we will carefully verify all the data and, if any issues arise, we will discuss them together,» Ashim explained.

The independent Kazakh fatalities list will thus be a more organised version of a similar website in Tajikistan (blocked by the authorities there), which currently shows 437 deaths, while the official figure is just 55 (with excess deaths at the level of nearly 2,000).

Tengrinews has meanwhile reported today that the Kazakh health ministry is seeking to reduce the proportion of “negative” coverage of the country’s fight against COVID-19 down to 10%. According to a slide shown at a government meeting today, local authorities are to achieve this through more effective communication with the public to explain the government’s anti-epidemiological measures, above all by conducting more regular press conferences and more making more active use of social media. The current level of negative coverage of official efforts on social media and in the local press is said to be 24%.

A minute’s silence was held across Kazakhstan yesterday in remembrance of the country’s COVID-19 victims, following an earlier declaration of 13 July as a national day of mourning for victims of the virus. On the same day, the Kazakh health ministry published – and then immediately removed – a list of 28 medical workers said to have died during the pandemic.

As previously covered on this site, the worrying surge of coronavirus infections and “community-acquired pneumonia” in Kazakhstan in recent weeks has reaped a significant number of high-profile victims, among them several officials and politicians. The latest such figure, reported today, is Deputy Defence Minister Bakyt Kurmanbaev.