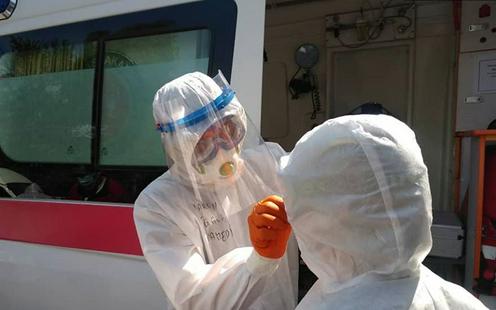 A Kyrgyz medical worker taking a swab test from a colleague. Photo from Med.kg

The measure is aimed at detecting coronavirus infections at an early stage. “Analysis has shown that patients turning up to Chuy region hospitals are generally already in a severely ill state,” the regional administration stated. According to officials, many local residents are attempting to treat themselves at home and only seeking hospital care once serious complications have already arisen. As part of the same campaign, the public will be sent warnings about the dangers of samolechenie (“self-treatment”) on messaging apps Whatsapp and Telegram.

As in neighbouring Kazakhstan, the Kyrgyz health system has been struggling to cope with a surge in coronavirus infections over the past few weeks and an accompanying explosion of severe cases of pneumonia, often with negative PCR test results for COVID-19. In terms of official infection numbers across the country, the Chuy region is second only to the capital city Bishkek (itself located in Chuy). As of 14 July, 2,052 coronavirus cases had been confirmed in the area, and 36 people have died. Due to problems with testing (and a likely high rate of false negatives), however, the official statistics are only a part of true the picture. Yesterday, for example, 11 people were reported as having died from COVID-19 in the previous 24 hours throughout the country. A further 74 people were recorded as dying from pneumonia. To date, 160 people have died from the virus in Kyrgyzstan according to the official statistics, yet a further 571 individuals are stated to have passed away with pneumonia since March. The Kyrgyz authorities last week vowed to include pneumonia cases in the country’s official COVID-19 statistics, rather than just those with positive coronavirus test results, but this does not appear to have happened yet.

This situation is likely not unrelated to the issue of “self-treatment”, and this is another way door-to-door testing may help. If large numbers of coronavirus patients are only obtaining medical assistance when they are already severely ill with pneumonia – whether through their own choice or, as seems to have been the case when the Kazakh and Kyrgyz health systems were taken by surprise around 2-3 weeks ago, due to unresponsive emergency services and overfull hospitals – PCR tests are less likely to pick up the illness, and people are more likely to die before being tested. As WHO official Michael Ryan explained with respect to Kazakhstan at the end of last week, this together with errors during testing and test processing more likely account for the current situation than some new “unknown pneumonia”.

In another move to tackle the problem of pneumonia fatalities, the authorities in Bishkek opened four special day hospitals on 5 July to deal with mild and moderate cases of the illness. This has since been expanded to 12 such facilities, generally set up on empty school premises, and earlier this week it was announced that four night hospitals are also to be opened. People are being encouraged to visit the facilities at the first sign of illness rather than waiting at home. According to the Bishkek mayor’s office, in the first nine days of the new sites’ operation, 24,000 patients were examined by medical staff.

The Chuy region itself is of course home to the country’s largest COVID-19 facility, the former American military base by Manas airport. 600 coronavirus patients are currently being treated there, with total capacity put at around 1,700 beds. Despite the site’s relatively good facilities, however, patients are said to be scared to end up there, put off by the word “base”, and ask to be taken to other hospitals.

While Kyrgyzstan is making efforts to render its fight against COVID-19 more effective, the battle shows no signs of abating. On 12 July, the country set a new record of 719 confirmed new infections in one day. As in Kazakhstan, the depth of the crisis has been thrown into relief by the high number of prominent public figures who have fallen ill with the coronavirus or with what is still referred to as “community-acquired pneumonia”. In recent days, it has been reported that former mufti of Kyrgyzstan, Chubak ajy Jalilov has passed away with presumed pneumonia, as has the technical director of Sputnik Kyrgyzstan (the news agency from whom we have drawn the original information on door-to-door testing), Mikhail Rogozhin. Nearly a quarter of Bishkek ambulance workers were also reported to be undergoing treatment for pneumonia and COVID-19.

Unlike Kazakhstan and Uzbekistan, Kyrgyzstan has not reimplemented a national lockdown, though some restrictions have been reintroduced in Bishkek, with a number of major markets and shopping centres closing and public transport no longer operating at weekends. Passenger transport between the country’s different regions has also been temporarily suspended.