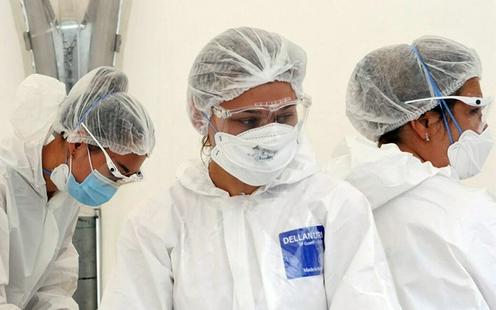 At a clinic in Kazakhstan. Photo from Azattyq.org

“Following consultation with the European regional office of the WHO, we have decided to switch to codifying and counting COVID-19 cases according to new codes. As a result, laboratory-confirmed cases of COVID-19 will be added to pneumonia cases that have returned negative PCR test results but have the clinical and epidemiological signs of the coronavirus.

“A full transition to COVID-19 coding with the use of the new codes for the international classification of the illness will be completed by 1 August. From the clinical experience that we have accumulated so far, we are able to appreciate the similarities between these illnesses and the need to apply a unified approach to their treatment,” the health minister said.

As covered previously, at present Kazakhstan’s official COVID-19 statistics only include laboratory-confirmed cases of the virus. At the start of June, the Kazakh health ministry even decided to exclude asymptomatic cases of the illness (while still counting them separately), justifying the move by saying that asymptomatic individuals pose a lower epidemiological risk. At the beginning of July, however, incoming health minister Aleksei Tsoy ordered that asymptomatic cases should once again be included in the overall statistics.

At the same time, like neighbouring Kyrgyzstan, Kazakhstan has seen a major surge of pneumonia cases since the end of June, many without confirmed coronavirus infections. The policy of only including laboratory-confirmed infections in the official statistics has led official sources to speak separately of a wave of “community-acquired pneumonia”, and even to a short-lived global media frenzy last week, after Chinese media reported on a new “unknown pneumonia” in Kazakhstan with a “much higher” fatality rate than the coronavirus. In reality, the Kazakh health authorities have not made any efforts to claim that these pneumonia cases are not COVID-19. Mass false negatives are possible, the country’s chief sanitary doctor, Aizhan Esmagambetova, has explained “since the coronavirus infection moves from the upper to the lower respiratory tracts, and then PCR tests may not always give a (correct) result”.

Numerous Kazakh doctors have previously argued that this atypical pneumonia should be recorded as COVID-19, with one much-reported appeal earlier this week urging the health ministry to “stop playing games with the statistics”.

“Playing games with the codes has led to delaying the provision of medical help, refusing admission to hospitals, an increase in fatalities and delayed ambulance assistance,” medical centre head Mynzhylky Berdikhozhaev wrote on Facebook.

Last night President Qasym-Zhomart Toqaev made a belated effort to put himself above the fray by demanding that the government “come to a decision on the statistics”. “All the data on the situation with the pandemic, however unpleasant, should be made available to the public. The greater the transparency and the level of mutual trust, the sooner we will together overcome this terrible scourge,” he wrote on his Twitter account.

In practice, hospitals in Kazakhstan are said to be treating all pneumonia cases as presumed cases of COVID-19. As Eurasianet has written, there are suspicions that one of the main reasons for the “games with statistics”, both in Kazakhstan and in Kyrgyzstan, is a desire to avoid paying out vast sums of money promised as compensation to infected medical workers and the families of medical staff who have died from the coronavirus. Relatives of doctors and nurses who have died recently in the city of Shymkent were apparently paid just a tenth of the $24,000 compensation earlier pledged by President Toqaev. The city administration explained that this was because these health workers had died of pneumonia and not of COVID-19.

Part of the reason for the fiddling with statistics on asymptomatic patients may have been linked to a decision announced earlier this month that medical workers working with asymptomatic patients do not qualify for bonuses previously promised to those who treat cases of COVID-19. At between $500 and $2,000 per month depending on the level of risk, such bonuses can make a huge difference to the salaries of healthcare staff in Kazakhstan. The contentiousness of the issue is shown by the bitter complaints today from staff at Almaty’s military hospital, which has been used as a coronavirus hospital for the last three months, but whose staff recently found out that they did not qualify for the bonuses since, as military personnel, they are not technically health ministry staff. Given that the decree on COVID-19 bonuses promises payment “within three months”, many of these payment issues seem to be crystallising around now.

Figures provided by health minister Tsoy today can help put the question of “community-acquired pneumonia” into some kind of relief. According to Kazakhstan’s official COVID-19 website coronavirus2020.kz, 66,895 cases have currently been recorded in the country, and 375 people have passed away (since Kazakhstan now only reports fatality figures each week, this figure holds for 13 July; Tsoy meanwhile stated today that the figure has now risen to 464).

As for pneumonia, up to 15 July a total of 234,187 cases of the illness have been recorded in Kazakhstan this year, Tsoy stated today, 3.3 times higher than the same period last year. This figure is said to include all kinds of pneumonia, both viral and bacterial. Over the same period this year, 3,327 people are reported to have died from pneumonia, compared to 1,896 in the equivalent period in 2019. At the same time, the health minister added that pneumonia fatalities remained about equal for most of the first six months in both years, and that the major part of the rise has occurred in the short period since the end of June – implying that up to 1,500 extra people may have passed away from COVID-19 in the past three weeks.