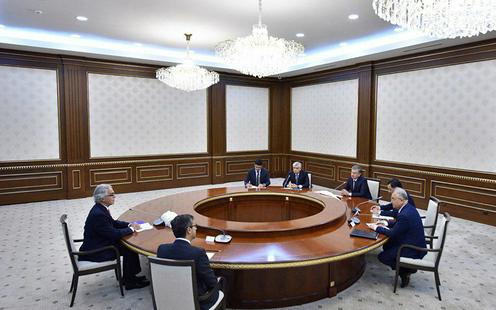 Diego García Sayán’s meeting with Shavkat Mirziyoyev. Photo from the Press Office of the President of Uzbekistan

In order to promote the independence of the judiciary in Uzbekistan, the government must reduce the influence of the president and the state prosecutor’s office over the judicial system. A number of organisational questions, including judges’ salaries, should be regulated by law and not by presidential decrees. These and other recommendations were included in a recently-published report by UN special rapporteur Diego Garcìa-Sayán, following a visit to the country in September 2019.

According to the report, in Uzbekistan “the judiciary cannot be regarded at present as being independent from other State authorities. Governmental authorities, and in particular the President, retain important functions in relation to the organization and functioning of the judicial system. Prosecutors continue to play a decisive role in criminal proceedings and exert significant pressure on individual judges.”

The report notes that the president’s powers to appoint ordinary judges has been abolished and transferred to the Supreme Judicial Council. Yet the appointment of senior judges and the ratification of decisions affecting the system as a whole remain within the jurisdiction of the head of state. Besides this, the members of the Supreme Judicial Council themselves need to be approved by the president.

“The pyramidal structure of the justice system and the extremely broad powers that court Chairs have with regard to the selection, promotion, evaluation and discipline of judges also contribute to limiting the capacity of individual judges to adjudicate the cases before them impartially and autonomously,” García-Sayán’s report observes.

The UN’s special rapporteur also points out that there are very few women among Uzbek judges – only 129 out of 1,038, or just 12.4% of the total number. The gender imbalance is particularly noticeable in the criminal and administrative courts, where the proportion of women judges does not exceed 8%. According to the Uzbek authorities, García-Sayán writes, the reason for this is that Uzbek women prefer occupations that offer a better work-life balance. However, “the Special Rapporteur does not share this view. The underrepresentation of women in the judiciary may be a reflection of deep-rooted stereotypes concerning the roles and responsibilities of women and men in the family and in society, stereotypes that result in discrimination against women and the perpetuation of their subordination within the family and society.”

On the subject of prosecutors, the report underlines that appointment procedures do not correspond to international standards. In Uzbekistan, the prosecutor-general is appointed by the president after being confirmed by the senate. Yet neither any specific qualifications for this position nor the selection procedure itself (nor indeed the grounds for dismissal) are spelled out by the constitution or the relevant law. In the view of the special rapporteur, this increases the risk of corruption. In his opinion, the system needs to be reformed by introducing legal amendments setting out public involvement in the selection of candidates for the post of prosecutor-general.

García-Sayán recommends limiting prosecutors’ competences to the criminal sphere (pre-trial investigation and execution of criminal punishment), rather than their current extensive influence over executive and legislative matters. Some of wide supervisory powers entrusted to prosecutors should be transferred to other state bodies such as the judiciary, or to an independent national human rights organisation. The power of prosecutors to recall or file a protest against court decisions should also be abolished (Mirziyoyev himself signaled that this may happen earlier this month).

The UN’s special rapporteur was also concerned by the shortage of lawyers in Uzbekistan and the fact that most of them live in Tashkent. In order to strengthen advocates’ independence, he recommends removing the Uzbek justice ministry’s widespread powers over the organization and functioning of the legal profession and the country’s Chamber of Lawyers.

In the course of Diego García-Sayán’s visit to Uzbekistan in September 2019, he conducted meetings with President Shavkat Mirziyoyev, with the heads of relevant ministries and of the Supreme Court and with lawyers. He also spoke to interested parties and officials in Tashkent, Samarkand and Fergana. According to García-Sayán, some civil society representatives who he was in contact with were subject to various forms of surveillance by the security services and called in for questioning before or after meeting with him.