Kyrgyz prison services give their version of Azimjan Askarov’s death 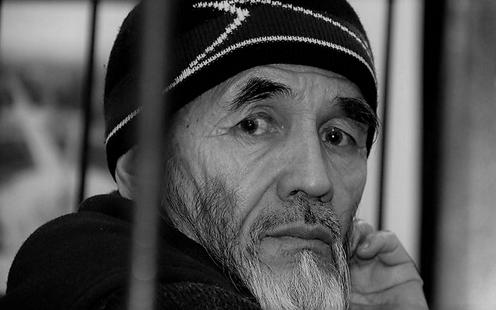 The State Penitentiary Service (SPS) of Kyrgyzstan has announced the details of the circumstances surrounding the death of human rights advocate Azimjan Askarov, who died in prison on 25 July. In a press release (in Russian) placed on the agency’s website, it is alleged that Askarov himself disconnected his oxygen concentrator. His time of death was announced as 10.30 am.

The press release states that the ethnic Uzbek rights activist sought medical help from the prison ward at prison no.19 on 9 July, complaining of a high temperature and general weakness. The doctors who examined the detainee recommended that he be hospitalised at the better-equipped correctional facility no.47. Askarov refused to be transferred and this fact was noted in his medical journal (it was earlier reported that Askarov had refused the transfer as he doubted that he would receive better care at prison no.47).

The worsening of Askarov’s condition was reported on 20 July. Members of the Kyrgyz ombudsman’s office who visited him the following day were able to confirm his illness. On 22 July, lawyer Valeriyan Vakhitov was permitted to see Askarov. The rights advocate was unable to walk unaided and had to be carried out by two prison guards. Askarov recounted that he had already been running a high temperature and had no appetite for ten days. During the course of the conversation, he spoke with a hoarse voice and had a severe cough.

In spite of his previous refusal, given the prisoner’s deteriorating condition, the prison services forcibly conveyed Askarov to prison no.47 for further examination and treatment on 24 July. The rights defender was given the preliminary diagnosis of “community-acquired pneumonia” and put on an oxygen concentrator. According to the Penitentiary Service statement, Askarov was under constant medical supervision, but he allegedly refused treatment and even tore the oxygen mask off of his face. According to doctors at the prison hospital ward, Askarov was suffering, among other things, with a number of cardiovascular illnesses, chronic pancreatitis and pyelonephritis of the left kidney.

At 9.30 am on 25 July, Askarov allegedly again removed the oxygen mask from his face, and at 10.30 am he was pronounced dead.

Responding to the Kyrgyz prison services claims on the reasons for Askarov’s death in a video statement on 25 July, Fergana general director Daniil Kislov, who knew Askarov well following the latter’s collaboration with Fergana News at the start of the 2000s, had the following to say: “The Kyrgyz penal services have accused Askarov of refusing treatment and tearing the oxygen mask off of his face. They say that this was the reason for his death. It is obvious that a person who is running a high temperature can become delirious and not fully understand the consequences of their actions. Medical staff had a duty to do everything in their power to save his life. But they failed to do this.”

The wrongly-imprisoned rights advocate’s death, Kislov argues, was “in the interests of numerous criminals” who are keen for the interethnic clashes in the south of Kyrgyzstan in 2010 to be forgotten, along with a whole series of crimes committed by Kyrgyz law enforcement agencies at the end of the 1990s and start of the 2000s which Askarov himself had worked so hard to bring to the world’s attention.

Askarov was sentenced to life imprisonment following the inter-ethnic clashes which occurred in southern Kyrgyzstan in 2010. Prosecutors alleged that the ethnic Uzbek rights advocate urged people to take part in the mass disturbances and was involved in the murder of a police officer. The opinion of other rights advocates – shared by the UN Committee on Human Rights – is that Kyrgyz law enforcement agencies fabricated the case against Askarov in revenge for his previous efforts to call attention to their human rights abuses. Major international human rights organisations such as Amnesty International, Civil Rights Defenders, the Committee to Protect Journalists, the Helsinki Foundation for Human Rights and Human Rights Watch have all spoken out in Askarov’s defence and called for his release, as has the UN Committee on Human Rights. Askarov attempted to use UN committee’s support to challenge his sentence earlier this year. In June, however, Bishkek administrative court refused to consider his appeal.