Border closures, litigation against God in Kyrgyzstan and a lockdown in Kazakhstan

How the coronavirus is being fought in Central Asia 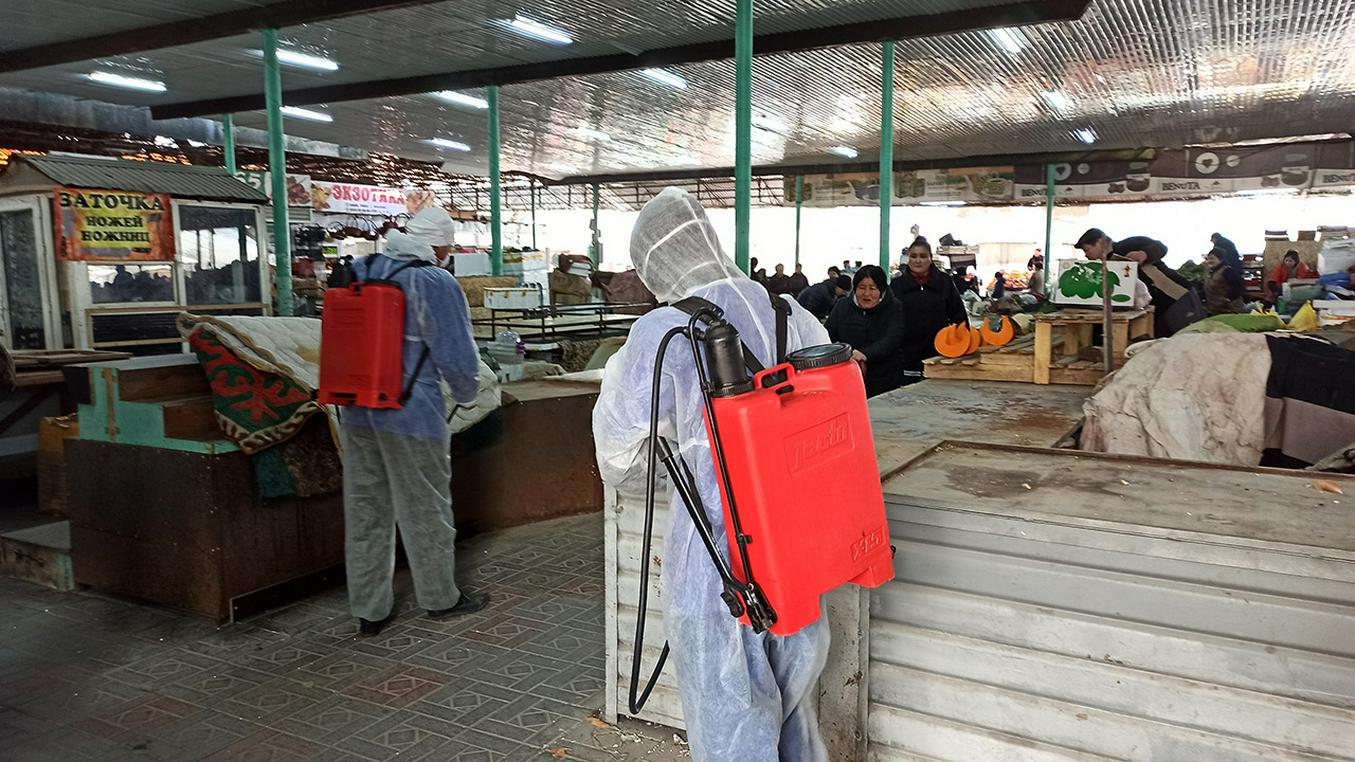 Sanitary measures at a market in Bishkek. Photo by Aleksandra Melnikova, Fergana

Official cases of the COVID-19 coronavirus came relatively late to Central Asia. Kazakhstan became the first country in the region to report a case on 13 March, and since then both Uzbekistan (15 March) and Kyrgyzstan (18 March) have reported infections. According to the latest available information, it appears that all known cases have involved individuals returning from abroad or those who have been in close contact with them. Drawing lessons from what they see as Europe’s excessively laid back approach to the problem, governments in Central Asia have begun to implement truly draconian measures in an attempt to stem the virus’s spread.

Kazakhstan has found itself on the frontline of Central Asia’s fight against the coronavirus. The first Central Asian state to report a coronavirus infection (13 March), Kazakhstan now has 36 confirmed cases. All of them are currently located in the two main cities: 18 in Nur-Sultan and 18 in Almaty. Yesterday, health ministry representative Diyas Akhmetsharip stated that these were “Kazakh nationals who arrived from Germany and Moscow – from among those who were already in quarantine. One of them came into hospital by themselves. It was not possible to isolate all of them immediately since they came from countries that were not in [the highest warning category]. All are now in quarantine. Their close contacts have been isolated and their other possible contacts established and we are in the process of locating them.”

On 15 March, Kazakhstan declared a national emergency and closed its borders. From 19 March, the cities of Nur-Sultan and Almaty are to be placed under quarantine. Transport in and out of the cities and will be restricted, as will residents’ movements between different municipal zones. Public transport inside Kazakhstan’s two major cities will be limited (or suspended) during the daytime and brought to a complete stop at night. The restaurant and catering industry is to operate by delivery only. All non-food markets and large shopping centres have closed, with the exception of food stores and pharmacies. Besides this, all medical facilities, retirement homes and residential homes have been placed in quarantine. No one is allowed to visit them apart from those who work there. 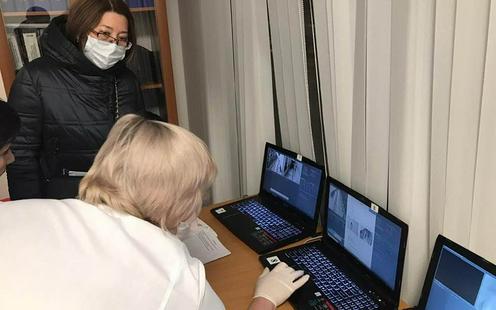 Screening passengers at an airport in Kazakhstan. Photo from the Facebook page of Lyazat Aktayeva

Kazakhstan has amended its list of countries by category of danger and is strengthening border checks. Category 1A now includes France, Iran, Italy, Spain and Germany. Category 1B comprises China, Korea and all Schengen countries. Kazakh citizens arriving from category 1A countries will be placed under obligatory quarantine and Kazakhs arriving from category 1B countries are being ordered to self-isolate. There is also a category 2, for countries currently considered comparatively safe – the Philippines, Qatar, India, the UAE, Great Britain, Azerbaijan, Thailand and the USA. Kazakh nationals travelling from these countries will be placed under observation by means of telephone calls to their places of residence.

The Kazakh government has also looked into ways of helping local businesses and industries through the crisis. Companies and sole proprietors will be supported with government guarantees and taxation measures – including a total exemption from taxes, low-interest-rate credit and more. 300 million tenge (nearly $700 million) will be allocated for the realisation of an “employment roadmap” which proposes major investment in social facilities and other state infrastructure.

And finally, a gift to the younger generation: due to the coronavirus, Kazakhstan has pushed back the date of national examinations for an unspecified period.

Uzbekistan was the second country in the region to officially confirm cases of virus (on 15 March). At the time of writing they have identified 15 infections. According to some reports, more than 640 people are currently in quarantine and 5,600 people have been ordered to self-isolate at home.

The Uzbek government has closed the country’s borders and shut schools and universities. Charter flights for foreign nationals wishing to leave the country are currently being arranged, but the government has automatically extended the visas of all foreign citizens until 10 April.

Tax officials are meanwhile busy conducting raids in markets around the country in an effort to prevent profiteering. They are also carrying out something of a novel task for them, chatting with traders, customers and market managers and trying to persuade them that stockpiling and panic-buying are not necessary. 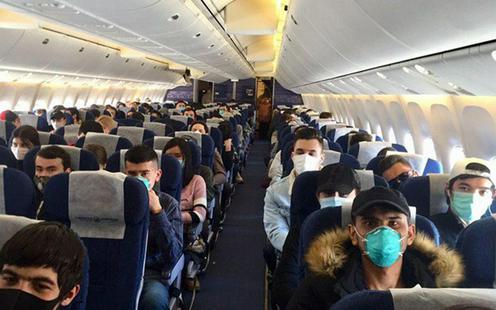 Passengers on board a plane flying into Tashkent. Photo from the press office of the Uzbek health ministry

The Central Bank of Uzbekistan has advised commercial banks to soften the terms of loans to businesses that could suffer due to the coronavirus. Whether fiscal measures will be extended to private individuals has not yet been announced.

Kyrgyzstan has only officially recorded its first cases of the coronavirus today, after three Kyrgyz citizens who recently returned from an umrah in Saudi Arabia tested positive for the infection. Even before this, however, the country’s government had undertaken decisive action to prevent the virus from spreading.

At a press conference yesterday, Deputy Prime Minister Altynay Omurbekova announced that Kyrgyzstan was introducing a temporary ban on entry for all foreign citizens. Foreign nationals will still, of course, be allowed to leave the country.

Before any official cases were confirmed, the Kyrgyz government declared its readiness to introduce a state of emergency even in the event of a single case of the virus – at a national, regional or district level depending on the circumstances. Following the positive test results of the three men in Suzak district in the Jalalabad region, a state of emergency has been declared in the district.

Kyrgyzstan has also extended the list of category 1 countries to include all countries which have recorded more than 1,000 cases of the virus. Kyrgyz citizens returning from these countries will have to undergo a two-week quarantine at a medical facility. The list currently includes China, Italy, Iran, Spain, South Korea, Germany, France, the USA, Switzerland, Great Britain, Holland, Norway, Sweden, Belgium, Austria and Denmark. Category 3 has been abolished and category 2 extended to include all countries with even one case of infection. Kyrgyz citizens returning from these countries will be required to self-isolate for two weeks.

The Kyrgyz capital Bishkek has declared a state of high alert. Sporting facilities, houses of culture, music and art schools, theatres, museums, libraries and a whole host of social institutions have had their operations restricted. The measures are currently planned to last until 6 April. 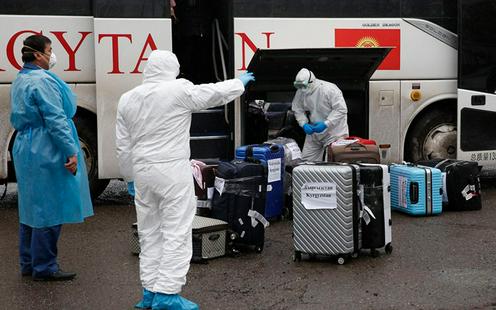 Kyrgyz health ministry employees checking an arriving bus. Photo from the press office of the Kyrgyz ministry of health

Parliamentary deputy Abdyvakhap Nurbayev has called on the government to support small and medium-sized businesses which are likely to suffer losses due to the coronavirus. Minister of Economy Sanjar Mukanbetov has said that the government is prepared to look into the question.

Following this, the Association of Markets of Kyrgyzstan asked the government to provide tax breaks to businesses and ensure that credit is extended throughout the COVID-19 pandemic.

Kyrgyzstan has also ordered the closure of all catering facilities with a capacity of more than 50 people for the next three weeks. They are being encouraged to switch to working by delivery.

After initially refusing to do so, the Grand Mufti of Kyrgyz Muslims has cancelled Friday prayers in mosques around the country. Maksat ajy Toktomushev had originally argued that doing so would be counter to the sharia, but has now declared that Islam allows amendments to some of the demands of the sharia.

And finally, TV presenter Urmat Asanbekov has filed a lawsuit at Bishkek’s Lenin District Court against the activist Arstanbek Abdyldayev (Arstan Alay), who has personally shouldered the blame for the COVID-19 global pandemic. Abdyldayev, who received 0.47% of the vote at the 2011 presidential elections in Kyrgyzstan, became something of a meme sensation in the country after announcing that winter would cease to exist after 2012. He followed this up last year by declaring himself God, and recently stated that he had sent the coronavirus to punish the Chinese for their failure to pardon Kyrgyz debt. “Arstan Alay has declared that he is God and himself sent the coronavirus. If the court is unable to prove the contrary then it must mean that he is capable of this feat,” Asanbekov said, demanding $685,000 in damages from Abdyldayev.

Tajikistan is still yet to record any official cases of the coronavirus.

The country recently withdrew an extension of its ban on entry to citizens of a further 35 states almost immediately after its proclamation. Tajikistan has suspended Friday prayers at mosques, but, unlike Kazakhstan, Kyrgyzstan and Uzbekistan, has not opted to cancel upcoming Nowruz celebrations. 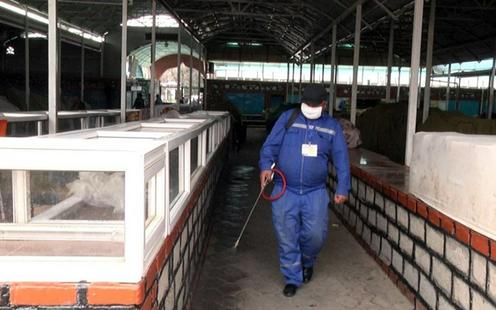 Disinfection work at a market in Tajikistan. Photo from Ozodi.org

Despite the absence of any officially confirmed cases, there have long been reports (here and here) of coronavirus infections in Turkmenistan.

The country, which shares a long border with heavily-affected Iran, has had at least three of its four borders closed for weeks already, and is refusing entry to citizens of countries that have reported cases of the virus. Turkmen citizens have also been banned from travelling to a number of countries. All international flights into the capital Ashgabat are being redirected to Turkmenabad (much to the annoyance of local residents), where quarantine camps have been constructed. Turkmen president Berdymukhamedov, who (among his roughly 40 books on various topics) has authored a work on “The Medicinal Herbs of Turkmenistan”, has ordered the use of harmala smoke to protect against the infection.