A billion-dollar crisis package, appeals to private businesses and a bootleg alcohol tragedy 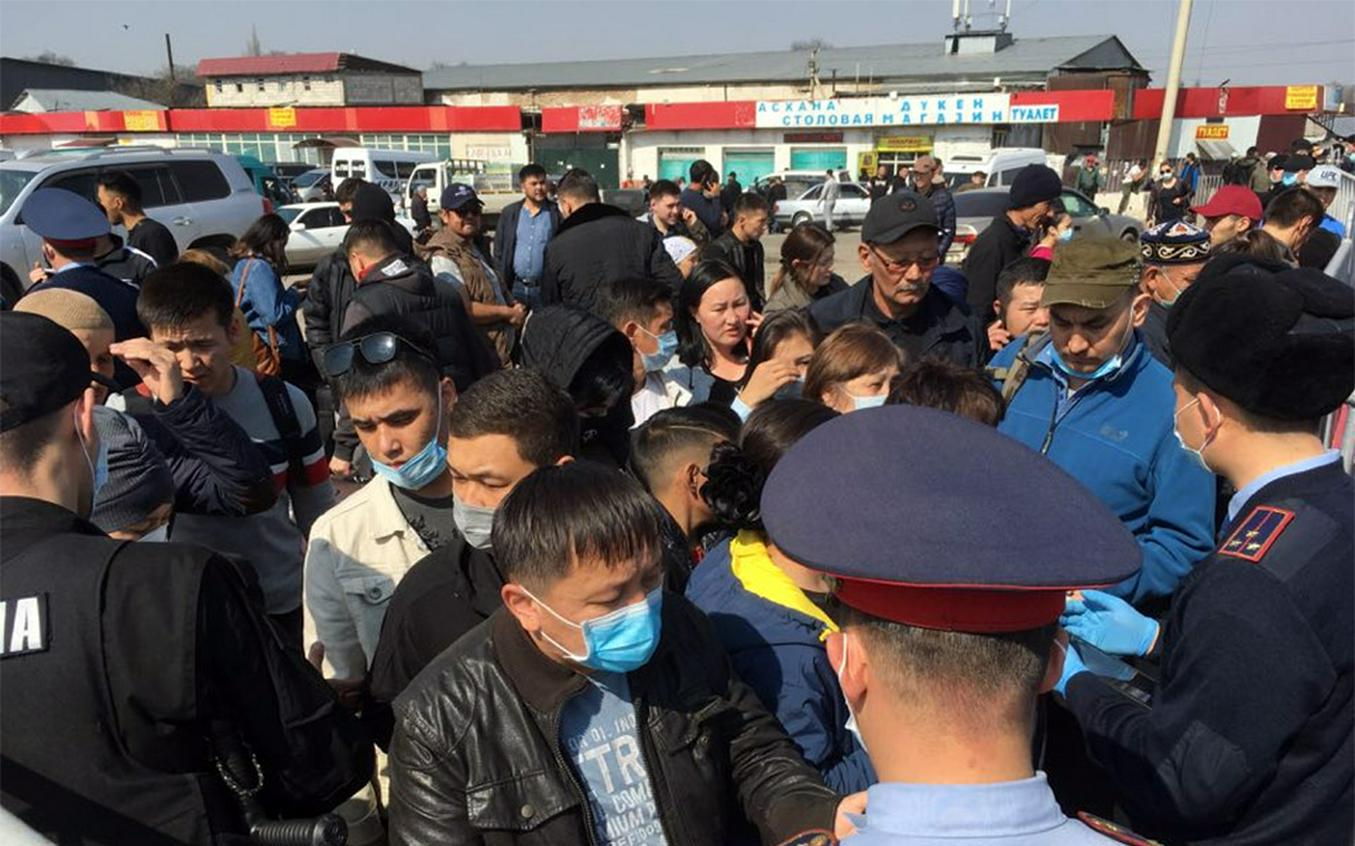 A checkpoint on the way into Almaty. Photo by Bagdat Asylbek, Fergana

A week after the first official cases of coronavirus were recorded in Central Asia, the numbers of confirmed infections remain low by global standards. According to the latest statistics, Kazakhstan, the first country in the region to report infections, has increased its number of cases since yesterday by 5 to a total of 49; Uzbekistan has risen from 23 to 33, and Kyrgyzstan from 3 to 6. Tajikistan and Turkmenistan are still yet to report any cases of COVID-19. Importantly, it would appear that all known cases in the area are still individuals who have returned from abroad or those with whom they have been in close contact.

Despite the low number of cases, Central Asian nations have introduced aggressive measures to prevent the virus from spreading. For a rundown on earlier measures, please see our earlier summary. Here’s what has happened since then.

The five new infections that have taken Kazakhstan’s total up to 49 are Kazakh citizens recently returned from Belorussia, Germany and France. The two passengers who flew back from Minsk to Karaganda have become the country’s first cases outside of the two main cities of Almaty and Nur-Sultan.

Despite the fact that the two passengers (together with the other 65 passengers on the plane) were tested at the airport and immediately taken into quarantine, the authorities have set up sanitary checkpoints on roads around Karaganda and police are checking vehicles “for the presence of symptoms of the coronavirus infection”. Almaty and Nur-Sultan remain in partial lockdown ahead of a full quarantine from 22 March.

Meanwhile, Kazakhstan’s former president Nazarbayev (who retains the title of Elbasy – Leader of the Nation) has called on businesses to help ordinary Kazakhs through the COVID-19 crisis. “Company owners can and should give financial and moral support to people who work for them day in day out. For example, by paying people during temporary enforced leave or introducing reduced work shifts,” Nazarbayev declared, appealing to Kazakh employers not to sack their workers.

“In turn, together with the government and regional akimats, major investors working in the extraction and processing of raw materials and the manufacturing industries should support the local population in the regions where they are based. Not to cast aside those close to you in times of trouble – this is something that is in the blood of the Kazakh people, in its genes and in its ancient traditions,” the country’s first president said.

Nazarbayev himself has donated $458,000 from his personal foundation to help fight the coronavirus, while the country’s ruling Nur Otan party will give $344,000 to help socially vulnerable groups. Almaty Deputy Mayor Yerlan Kojagapanov has called on potential donors to imitate the examples of a number of wealthy businessmen who have already made contributions to the fight against COVID-19.

The Kazakh government has previously announced a $700 million anti-crisis package.

The second country to report cases of the virus in Central Asia, Uzbekistan still has the second highest number of infections, rising by 10 since yesterday to 33. The country’s health ministry has stated that nine of the new infections are relatives of those who had already been diagnosed with the virus and the other is a person recently returned from abroad. Chief sanitary inspector Nurmat Otabekov announced yesterday that over 9,000 people who have recently returned from abroad are currently under medical observation. 6,000 people have already been allowed to return to their homes and 2,300 are in quarantine.

It was meanwhile announced that the current suspension of all international passenger travel into and out of the country will continue until the middle of April.

Uzbek president Shavkat Mirziyoyev has unveiled a $1 billion anti-crisis fund in connection with the coronavirus. The funds will be used first and foremost to prevent the spread of the virus, to buy medical supplies and test kits for hospitals and to finance quarantine centres. Medical workers will be put on 120% pay.

Significant expenditure will also be required to support private businesses and the social needs of the population. Among other measures to help struggling companies, Mirziyoyev has ordered the provision of interest-free loans to businesses forced to close as a result of the virus, and their exemption from local taxes for a six-month period.

As for social measures, a 10% rise in recipients of social benefits is expected in connection with the closure of a number of institutions for quarantine, as well as for those placed in quarantine themselves or those who need to look after them. Parents forced to take care of young children due to school closures will be given leave.

Around $75m will be directed to measures to increase employment.

In order to meet these obligations, the Uzbek government plans to borrow $1 billion from international financial institutions over the course of 2020.

There have been reports of criminals dressing up as disinfection workers to gain entrance to people’s homes. In brighter news, some Uzbeks seamstresses have begun to meet the shortfall in medical masks by sowing their own and distributing them for free, and a local restaurant chain in Tashkent as pledged to deliver free meals to medical staff dealing with the coronavirus.

In Kyrgyzstan, the number of confirmed infections has risen from 3 to 6. Besides the three umrah pilgrimage returnees from Saudi Arabia already reported, the new cases are said to be three female pilgrims who flew back into the country from Kuwait. Work has begun to locate those who may have come into contact with them and a state of emergency has been declared in their home districts. The three home villages of the country’s first three cases have been placed under quarantine.

As already reported, despite the low number of cases, existing measures in place to counter the spread of the coronavirus in Kyrgyzstan are extensive.

In new measures to help local business today, the National Bank of Kyrgyzstan has advised the country’s commercial banks to put loan repayments on hold for a minimum of three months. Among other credit-related measures, there is also a ban on fines for the late payment of loans.

The Association of Markets of Kyrgyzstan has already appealed to the government to introduce tax breaks. Sowing workshops, for example, are running out of materials due to the closed border with China, and the goods of many Kyrgyz importers are currently stranded in China. The government has said it is still in the process of looking into measures to support business.

300 Kyrgyz citizens are currently stranded at Moscow airport after their flight to Osh via Bishkek was cancelled at the last minute and they were not allowed to go back through passport control. Hundreds of Uzbek travellers are also reportedly stuck in airports in Moscow and Novosibirsk.

On the bright side, a Bishkek medical official has reported that cases of gastro-intestinal infections have totally dropped off in the capital in the wake of the coronavirus – for the first time in his career there were no callouts for such infections in the last 24 hours. “Of course, everyone has started to wash their hands,” he said.

Finally, as well as following the advice of the government and medical professionals, the chief mufti of Kyrgyzstan has recommended reading a verse of the Quran 313 times in order to protect oneself from illness, after a colleague reported a dream in which the prophet Muhammad advocated the very same protective measure. “It’s just a dream of course,” Maksat ajy Toktomushev said, “but maybe it can help someone.”

Tajikistan is still yet to report any official cases of the virus and has taken by far the most lenient approach of the governments in Central Asia. Nowruz celebrations have not been cancelled and the authorities have re-allowed Friday prayers in mosques. Schools, universities, businesses and organisations in the country are still working as normal. However, it was announced yesterday that all international flights are suspended for an unspecified period.

Also yet to report any cases of the coronavirus is Turkmenistan (though, as previously mentioned, doubts about this have been raised).

As of yesterday, the Turkmen authorities seem to have put the capital city Ashgabat in lockdown and to be restricting the movement of people between the country’s regions, according to Turkmen.News and Azatlyk. All roads into and out of Ashgabat have been blocked and people are only being allowed in and out with special permission. Private cars, taxis, marshrutkas and buses from the regions are being told to turn around at the entrance to the city. There are reports that people trying to travel to the capital from the provinces by air and rail are being refused boarding unless they reside in Ashgabat.

Residents of district capitals are reportedly being refused entry to regional capitals and roads between regions have been closed. Special permission is required to travel between the country’s different administrative regions. According to Azatlyk’s correspondent, the measures are to remain in place until the end of April. There are also discussions about extending school holidays and closing nurseries and kindergartens.

In the most tragic coronavirus news in Central Asia so far, Turkish media are reporting that 20 Turkmen nationals in Istanbul have died after drinking homemade alcohol in an apparent attempt to protect themselves from the virus. 34 other Turkmens are said to be in intensive care. Eleven people have been arrested over the incident, at least 5 of them Turkmen citizens.