On the anniversary of the June 2010 interethnic violence in southern Kyrgyzstan – What was the scene in Osh in the aftermath of the clashes? 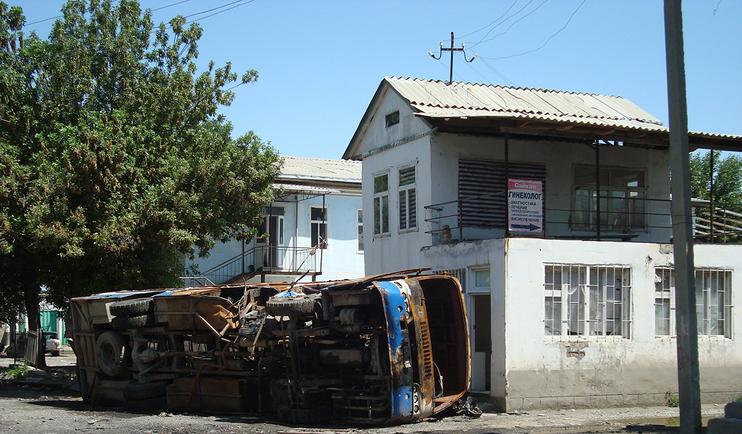 A burned-out bus in the south of Kyrgyzstan, June 2010 . Photo by Fergana

Ten years ago, during the night between 10 and 11 June 2010, interethnic clashes erupted in southern Kyrgyzstan, continuing for five days thereafter. Tens of thousands of people fled the violence into neighbouring Uzbekistan and found refuge there – at least for a time. On the anniversary of the violence, Fergana has chosen to publish a number of photographs taken in the city of Osh during these terrible days. 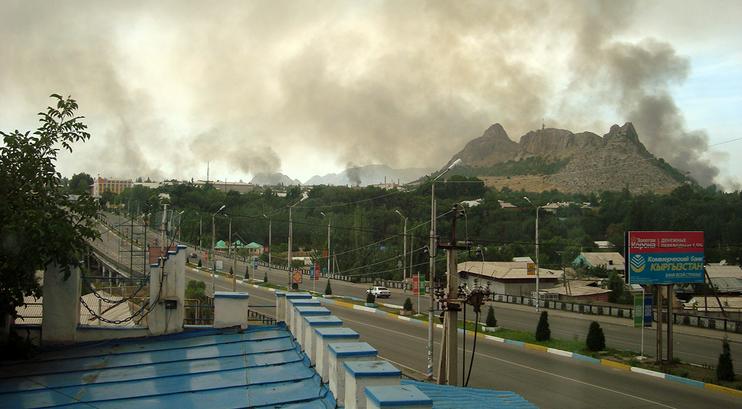 Smoke from fires in Osh, June 2010. Photo by Fergana

Estimates of the number of casualties vary. The Kyrgyz government’s National Commission (“for the comprehensive study of the causes and consequences of the tragic events which occurred in the south of the republic in June 2010 and the formulation of recommendations in relation to them”) reported 426 deaths, with 381 bodies identified. The majority of identified bodies (276) were those of Uzbeks, with 105 Kyrgyz victims and two members of other ethnic groups. 1,925 people received injuries (925 of them gunshot wounds).

In 2015, the media cited a new official death toll of 446. In June 2012, however, one human rights group had spoken of 496 victims. Also in 2012, the office of the Kyrgyz prosecutor-general gave the figure of 417, the Ministry of Social Protection of the Population cited 414 deaths and the Ministry of Health 418. 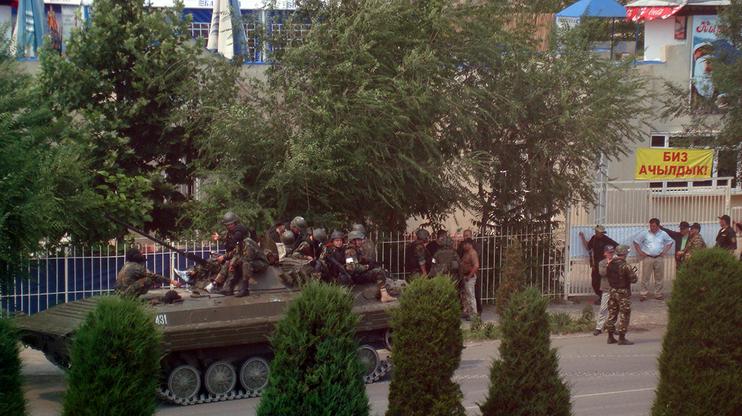 Soldiers during the disturbances, June 2010. Photo by Fergana

According to human rights organisations, 1,755 owners of over 2,000 damaged houses said that both their homes and their belongings had been destroyed. 1,721 homes were set on fire. Many people also had their cars set ablaze or stolen – 374 cars in total were lost.

According to NGOs, the total damage in the south of the country came to almost 9 billion soms ($121m at today’s exchange rate). The government gave the figure of 4 billion soms. 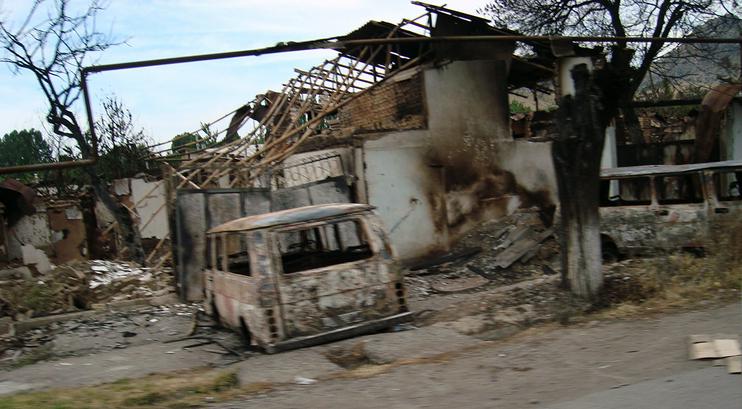 Presenting the conclusions of its investigations into the violence in May 2011, an independent international commission under Finnish politician Kimmo Kiljunen gave its own figures for the numbers of dead and injured. “In total about 470 people died. It is expected that this figure will grow but not substantially. (…) Of the 470 killed, 74% were Uzbek, 25% were Kyrgyz and 1% were other ethnicities or nationalities. (…) Many thousands of people were displaced. About 111,000 people were displaced to Uzbekistan and a further 300,000 were internally displaced. There was also significant property damage, again to a disproportionately high number of ethnic Uzbek owned properties. (…) Sexual and gender based violence committed during the events remains underreported and largely unacknowledged by the authorities.” 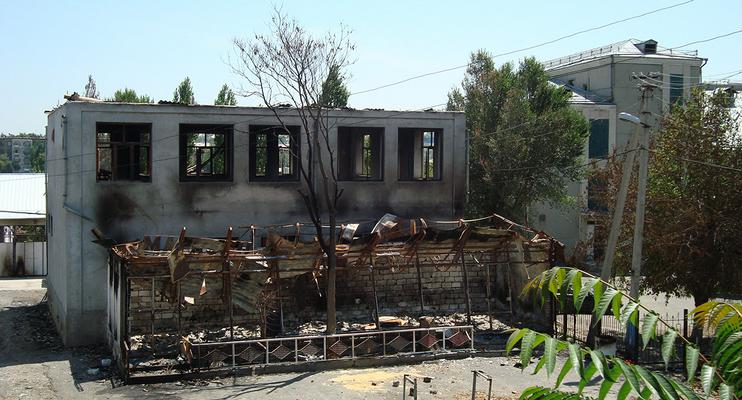 A burnt-out building. Photo by Fergana

Kimmo Kiljunen came to some uncomfortable conclusions for Kyrgyzstan: “The most important question is: What was the cause of the conflict and when did it start?” he said at a press conference. “The cause was political fanaticism, which made use of ethno-nationalism. The conflict in fact began on 7 April (the reference is to the April Revolution of 2010 – Fergana), because these events led to the creation of a political vacuum, which created an unstable situation also in the south of the country. We analysed three basic political forces which participated in the conflict: these are the Bakiev clan or people who supported the previous regime, supporters of the Provision Government, and a number of Uzbek leaders who had started working to organise the Uzbek community to take a more active part in the political life of the country. A number of incidents took place in the south already in May. I cannot give an exact date for the start of the conflict, because the situation became more and more heated, acts of violence then occurred which culminated in tragedy. This was a process and not a momentary event,” Kiljunen explained.

“How do we qualify the events from the point of view of international humanitarian law? We clearly understand now that this was not an instance of war crimes, it was not a genocide, but some aspects of the events, particularly the attacks on Uzbek mahallas between 11 and 13 June, were a crime against humanity. We also know that many violations of human rights took place, and that they have even continued to take place after the events,” Kiljunen said. 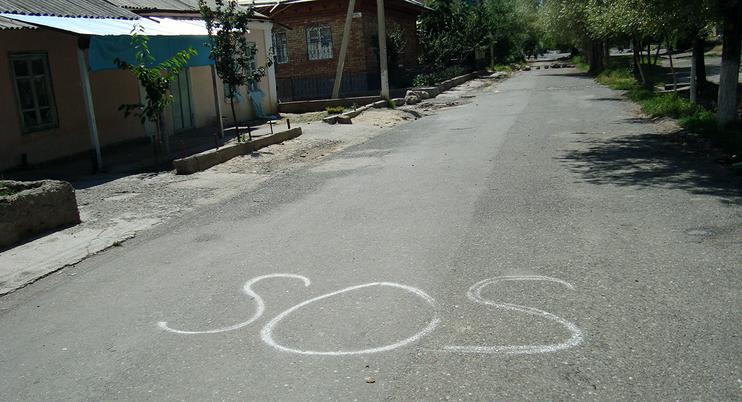 The Kyrgyz government at the time sharply criticized the international commission’s report and Kiljunen himself was declared persona non grata in Kyrgyzstan. His investigation was described as “unobjective, one-sided and not conducive to peace, stability and the prevention of a new conflict and development of a peaceful future for all residents of Kyrgyzstan” and accused of “stirring up hatred and thus posing a threat to national security”.

Consequences of the disturbances in the south of Kyrgyzstan, June 2010. Photographs by Fergana

Following the June pogroms, many ethnic Uzbeks left the country for good and a large number of Uzbek-language schools were closed.

Several hundred people remain in jail serving long prison sentences, with no hope of an objective review of their case, after being subjected to torture during investigations. Dozens were sentenced to life in jail, including human rights defender and journalist Azimjan Askarov, who remains behind bars in spite of protests on the part of the international community and demands from the UN Human Rights Committee to set him free.