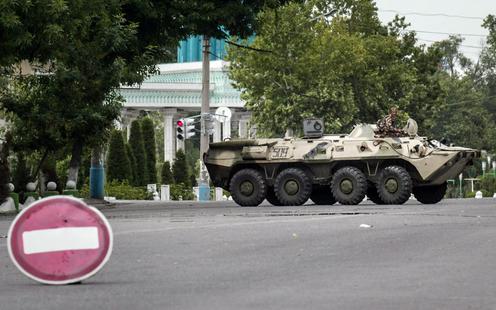 Photo from the Andijan events in 2005 by Denis Sinyakov, from the Fergana archives

Among the victims of the events in Andijan in 2005 were a number of innocent local residents who were shot due to insufficient coordination between ordinary soldiers and the military leadership. This statement made by Deputy Prosecutor-General of Uzbekistan Svetlana Artykova in an interview with news agency Qalampir (in Uzbek).

Artykova was present in Andijan in May 2005 and, she says, took part in investigations into the events – which she, following the official line, refers to as a “terrorist act”, but which human rights organisations have called “the shooting of peaceful demonstrators” and “a massacre”.

Responding to the journalist’s question as to whether the security forces fired on peaceful citizens on 13 May, Artykova answered in the affirmative, admitting that this was not the right thing to do. But she said, at the time, “communications were bad, the commanding officer either didn’t hear the orders in time or misunderstood them, there were no proper preparations. There are many reasons,” Artykova explained, adding that “we made mistakes”.

According to her, charges were brought against those responsible for the deaths of innocent local residents, including state employees, and “some of them, having served their sentence, have already returned to their normal lives”.

Asked why the government has not spoken openly about the Andijan events before, Artykova replied that the country has changed over the last three years. “Back then, Uzbekistan was closed. How difficult it was for us to work with foreign media and so on in those days! Now it is a new Uzbekistan, now there is a new style of politics. Now there is a new political will. Even you and I have become new.”

The Andijan events occurred on 13 May 2005. They were preceded by the trial of a group of local businessmen accused of religious extremism and membership in the banned organisation Akromiya. The trial angered many local residents, who gathered outside the offices of the Andijan hokimiyat (local administration) on the morning of 13 May to demonstrate. The leaders of the demonstration took a number of local officials and police officers hostage. The demonstration was dispersed later that day by government troops using gunfire.

The Uzbek authorities later stated that, during the night of 12 May, groups of armed men had attacked the city jail and a number of government buildings. During the course of the attack, 12 law enforcement officers had been killed and 334 weapons seized, and the terrorists had taken a total of 70 people hostage, of whom 15 were killed. Army units were sent in to Andijan.

According to the office of the prosecutor-general of Uzbekistan, “in total, 187 people lost their lives as a result of the terrorist attack, 60 of them private citizens, including 2 minors and 1 woman. 31 soldiers and law enforcement officers were killed by the terrorists. 287 individuals received bodily injuries of various levels of severity, including 91 peaceful civilians, 49 law enforcement officers and 59 soldiers. During the course of the counter-terrorism operation, 94 terrorists were neutralised and 76 injured.”

The official figures were contested in accounts and reports of the events of 13 May in Andijan prepared by the OSCE Office for Democratic Institutions and Human Rights (ODIHR) and other international organisations. According to the testimony of journalists and human rights advocates who were present at the scene of the events, the number of victims was far higher.