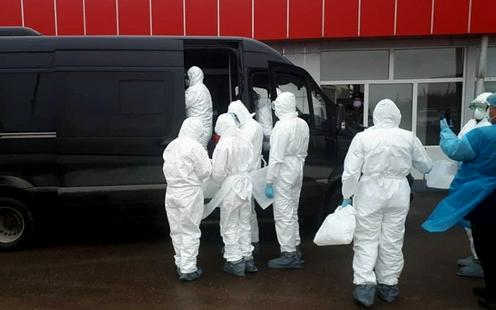 Kyrgyzstan has reported 26 new cases of the COVID-19 coronavirus, more than doubling its caseload from yesterday to 42, news outlet 24.kg writes (in Russian). Previously, the country had 16 cases of infection.

The new patients have been hospitalised in Bishkek’s Republican Clinical Infectious Diseases Hospital, as well as hospitals in the southern cities of Osh, Nookat, Jalal-Abad and Batken. No information was provided about how the individuals were infected.

Another four individuals have been hospitalised with preliminary positive test results which are awaiting confirmation.

Following the spread of the virus, safety measures in the affected areas are to be stepped up considerably. Previously, on 22 March, a nationwide emergency (“emergency situation”, chrezvychaynaya situatsiya) was declared across Kyrgyzstan. Since then, vehicles mounted with loudspeakers have been patrolling the country’s streets, urging the public not to leave their homes unless strictly necessary. Yesterday, however, Kyrgyz PM Mukhammedkalyi Abylgaziyev complained that the public were not taking the measures sufficiently seriously. “Many people continue to act as if there is nothing wrong – thoughtlessly and irresponsibly,” he said.

Starting 08:00 on 25 March, the cities of Bishkek, Osh and Jalal-Abad, the Nookat and Kara-Suu districts of Osh region and the Suzak district of Jalal-Abad region will now be placed on the higher emergency footing of “chrezvychaynoe polozhenie”, a full state of emergency (previously introduced for the Suzak district where the first cases were confirmed). A new chain of command will be formed in these areas under the leadership of senior officials of the ministry of internal affairs.

The heightened state of emergency means that strict controls will be brought in on travel into and out of the affected territories. Checkpoints have been set up around Bishkek where the health and reasons for travel of all entering the city will be checked. Curfews are also to be introduced. In Bishkek, the curfew will be enforced between 8 pm and 7 am. Non-residents of the capital have been told to leave the city by midnight tonight.

The new emergency status allows the authorities to order members of the public to remain in their homes, set special working hours for businesses, restrict the internal movement of traffic and introduce special restrictions on communications. The authorities will also be able to interfere in the work of the media if deemed necessary. Able-bodied members of the public can be called on to participate in preventive work to stop the spread of the virus, the armed forces can be called in to maintain public order, employers can be forbidden from dismissing their workers without sufficient cause, and state organs can ban private events such as weddings and birthday celebrations.

The heightened state of emergency is to last until 15 April 2020.

Kyrgyzstan has already adopted a number of severe measures to prevent the spread of the COVID-19 coronavirus, including closing its borders, restricting travel inside the country, disinfecting streets and public places and quarantining all individuals arriving from countries with confirmed cases of the virus.