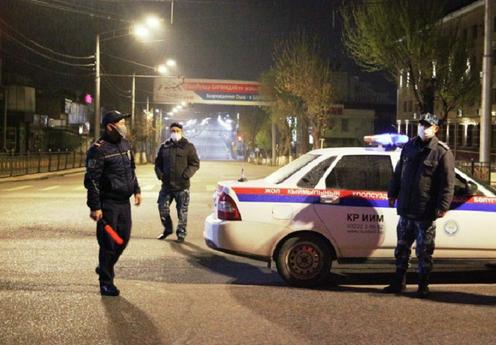 The head of the special commission to oversee the state of emergency in Bishkek, Almazbek Orozaliyev, has signed a decree limiting the usage of private vehicles in the city to situations of urgent necessity, as well as introducing a number of other new restrictions, 24.kg reports (in Russian).

Among the new measures is a ban on the movement of unaccompanied minors and bans on gatherings of more than three people (apart from members of the same family) and on visits to friends, family and neighbours.

Commenting the measures, Orozaliyev said that the new restrictions on Bishkek residents’ movements had been made necessary by the fact that many people were not taking existing anti-virus regulations sufficiently seriously. “We have been forced to take such unpopular measures because there are still many people out on the streets, placing themselves and others in danger,” he stated.

Existing measures in place in Bishkek include the total suspension of public transport and taxi services and a ban on residents leaving their homes without a written note setting out one of three permitted reasons for being outside – food shopping, going to a pharmacy, or (in cases of urgent need) visiting a medical facility. Those taking pets for a walk may do so no further than 100 metres from their homes. Only employees of a limited number of organisations are permitted to go to work, and they must obtain special permission to do so (initially such permits were issued by the emergency commission, but such long queues formed outside its offices that the task was transferred to district police stations). A night-time curfew has been introduced in the city, with 137 people arrested last night alone for its violation.

Meanwhile, the Kyrgyz government has today unveiled fiscal a and financial anti-crisis plans, focused on lightening the tax and loan burden on businesses, and a social assistance plan for vulnerable segments of the population.

“Today almost all businesses find themselves under a colossal burden,” Kyrgyz prime minister Mukhammedkalyi Abylgaziyev said, introducing the plan. “Despite the difficult circumstances, we must help our businesses to emerge from this crisis. The National Bank, together with commercial banks, is assessing the situation and will take exhaustive measures to alter the terms of loan repayments. This holds for both the principal amount and interest repayments. We must not allow any domestic businesses to go bankrupt.”

The financial component of the government’s plan includes provisions for the country’s central bank to conduct credit auctions to safeguard liquidity in the financial sector, relax prudential requirements for commercial banks, and to work together with commercial banks to extend and restructure loans for a period of no less than three months. The government also pledged to attract financing from the Russian-Kyrgyz Development Fund in order to offer low-cost loans to businesses, and to work with other partners to set up a support fund for companies particularly heavily affected by the current state of emergency. No specific sums were mentioned.

Fiscal measures to assist Kyrgyz businesses include deferred payments for tax and social contributions arrears accrued on account of the current state of emergency, a moratorium on fines for non-payment of taxes until 1 July 2020, recommendations for local authorities to allow a three-month deferral on rent payments for municipal premises, restrictions on on-site tax audits until 2021 and moratoria on a number of other government audits until 2022, and a recommendation to relevant authorities and organisations not to cut businesses off from electricity, water and gas supplies and other communal services, as well as the internet, for late payments (or fine them for this) and to introduce a temporary ban on initiating bankruptcy procedures.

Announcing the measures, Abylgaziyev added that the current crisis entailed a need to “alter the structure of the economy”. “We need to make it less dependent on imports, especially in the sphere of food security. Import substitution is the best way forward. We have a chance to set out on a path towards ensuring that we ourselves produce the major part of the essential goods we need,” Abylgaziyev said, adding that a special programme of preferential treatment for domestic producers would be drawn up together with the Russian-Kyrgyz Development Fund.

The government’s social support plan (“of measures to provide social support to the population and safeguard food security”) focused largely on the issue of food security. Abylgaziyev assured the public that there was no cause for concern with respect to the supply of food products or medication, given that “the borders are open (to goods) and goods loads are coming in as normal”. The plan directed large producers and distributors to ensure sufficient supplies and stable prices of basic foodstuffs and envisages the organisation, together with EAEU partners, of measures to ensure a “green corridor” for unhindered transport of socially-sensitive goods and medical supplies. Noting that 5,000 tons of flour had already been earmarked for vulnerable segments of the population, the Prime Minister added that the government would work together with the business community and volunteers to deliver targeted support to struggling individuals. The text of the plan envisages “targeted social assistance to low-income families in the form of food packets”.