WHO’s representative in Tajikistan changes tune ahead of imminent mission 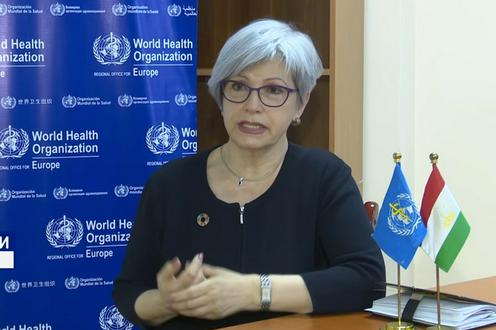 The World Health Organisation’s permanent representative in Tajikistan, Galina Perfilieva, who has long supported the Tajik authorities’ claims that the country is free of COVID-19, has stopped insisting that all is well in the country, ahead of the WHO mission which is due to arrive in the country at the end of this week. Perfilieva’s latest comments came in an interview with RFE/RL’s Tajik service Ozodi (in Russian).

Responding to the news outlet’s suggestion that the director of the WHO’s European regional office, Hans Kluge, would uncover the real state of affairs in Tajik hospitals, Perfilieva answered that “the job of the WHO is not to find the virus, but to help our medical colleagues to fight it. We hope that the mission will come here and help. Clearly the countries of this region were not prepared for COVID-19, they have no equipment or supplies. We are counting on the support of donors and partners.”

At the start of April, in an interview with the Tajik television channel Tajikistan, Perfilieva said: “According to the official statistics – and we support this, since we work closely with the laboratory that carries out the PCR tests – there is not a single positive case of COVID in Tajikistan”. Since then, the Tajik authorities and pro-government media have been citing the WHO representative to back up their contention that the country is free of COVID-19. In a later interview with Russian newspaper Kommersant, shortly before the announcement on the WHO mission, Perfilieva clarified that “it is impossible to categorically assert that there are no cases of the illness in the country”, since “there are asymptomatic forms of COVID-19, and in Tajikistan, as in the absolute majority of countries around the world, it is not possible to carry out laboratory tests on the whole population in order to find them”. She reiterated this point while speaking to Ozodi.

Responding to criticisms on social media that she does not verify information passed on to her by the Tajik health authorities, Perfilieva stated: “I don’t read Facebook, I don’t have time for that. I’m sure everyone will judge as they see fit. We are doing all we can. We don’t have a very big team, we’re waiting for our colleagues to come and help us. Our task is to make sure that medical workers are provided with the latest WHO recommendations on diagnostics, on treatment and on epidemiological research.”

She yet again asserted that there are no reasons to doubt the quality of the test kits being used, since they have come from Germany and from a WHO-certified Russian institute, but added that tests have not been forwarded to a London laboratory for validation since the end of March, when Tajikistan suspended air travel.

Perfilieva said that she does not believe the stories published by independent media outlets on cases of dubious deaths, where people with pneumonia diagnoses have been buried amid heightened security, in closed coffins, and in shrouds doused in chlorine. “Tell me, did you see any of this for yourself? I haven’t seen it (...) I would like concrete facts (...) I can’t confirm any of this because I haven’t seen it with my own eyes,” the WHO representative said.

Perfilieva said that the composition of the imminent WHO mission to Tajikistan has not been finalised, nor have details of the work it will undertake in the country. She has also not received statistics on pneumonia deaths from the Tajik health ministry, though she has requested them.

The Tajik health ministry recently responded to pressure for more transparency on a recent wave of pneumonia deaths in the country by publishing statistics showing that the number of cases of pneumonia in the country in the first quarter of this year were actually lower than the equivalent period in 2019. The data did not include information on fatalities, nor did it cover April, when most of the “dubious” deaths have been reported.

On Saturday, the Tajik authorities ordered all schools to be closed until 10 May and banned all public events. Several medical facilities in the capital, including City Hospital No.1 where a number of recent pneumonia deaths have been reported, have been placed under quarantine and are said to be for the most part accepting only patients with high temperatures.


Yesterday, the authorities stated that 319 people have been admitted to City Hospital No.1 with suspected pneumonia, 136 of them medical staff, though it was not mentioned over what period of time this has occurred. 107 of the patients are said to have been discharged already, 11 have died and 8 remain in intensive care.

In many of the high-profile cases recently, the authorities have insisted that coronavirus tests have been conducted and come back negative, but it seems clear that in a number of instances tests have not been carried out. Speaking about two recent pneumonia deaths in the central hospital in northern Zafarabad district, the head doctor said that tests were not taken «since X-rays showed pneumonia and there is no coronavirus in Tajikistan».

Meanwhile, the head of Tajikistan’s Social Democratic Party, widely felt to be the only genuine opposition force permitted in the country, called on the country’s authorities yesterday to stop denying the existence of the coronavirus in the country. In a post on Facebook, Rakhmatullo Zoyirov stated that that virus has been present in Tajikistan for three months. He said that the virus may have been brought into the country from China before the closing of borders, or via Tajiks returning from abroad who were able to skip quarantine due to nepotism or bribery.

Yesterday, Russian news agency Interfax, citing a source in the Kyrgyz government, wrote that the Tajik authorities are preparing to make an announcement in the coming days about the existence of COVID-19 in the country. «The Tajik government will soon acknowledge the difficult epidemiological situation in the country and the presence of the coronavirus, and implement quarantine measures in a number of districts around the republic,» the source said.