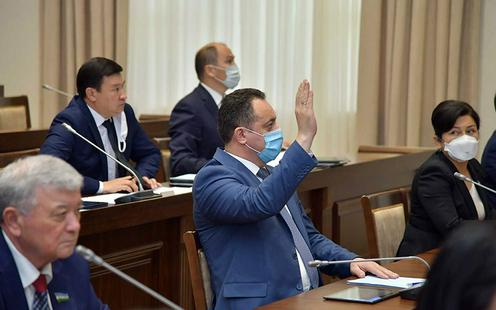 Senators at the plenary session . Photo from Senat.uz

Uzbek senators have voted by a majority to approve the country’s participation in the Eurasian Economic Union with observer status. 71 senators backed the motion, with 16 voting against and four abstentions. In total, 91 of the senate’s 100 senators took part in the vote, Gazeta.uz writes (in Russian).

Senate speaker Tanzila Narbaeva called the decision “an important issue related to the socio-economic development of Uzbekistan”. She added that the country’s participation in the EAEU has been under discussion for two years.

During lively discussions, senators actively discussed the pluses and minuses of EAEU participation. The senate’s press office reports that opponents of integration forecast lower production levels for a number of sectors of the economy, job losses, a reduction in foreign investment, and an increase in imported products on the domestic market. It was also argued that Uzbekistan’s participation in the EAEU could delay the country’s entrance into the World Trade Organisation.

Proponents of joining the EAEU underlined its benefits: an increase in the volume of foreign trade, particularly the export of agricultural products, plus the granting of important rights to labour migrants. “Uzbekistan’s participation in the EAEU as an “observer state” will allow it to be informed about the organisation’s work and, after careful analysis, to come to the right decision (about full membership),” the senate’s press release states.

Uzbekistan’s participation in the EAEU with observer status was previously approved by the legislative chamber of the Oliy Majlis (86 to 32, with 14 abstentions). According to members of the Uzbek parliament’s lower chamber, such a decision would lead to an increase in the country’s foreign trade and serve to strengthen the rights of Uzbeks working in other member states. In addition, it would allow Uzbek companies to place goods with an added value of $1.6 billion on foreign markets. And tariff privileges for international freight transportation would allow them to save $220 million on rail freight charges.

The current membership of the Eurasian Economic Union is made up of Armenia, Belorussia, Kazakhstan, Kyrgyzstan and Russia. Moldova has observer status. Observer status allows a country to attend EAEU organs’ meetings and have access to all documents ratified at the meetings, but it does not grant the right to participate in decision-making.