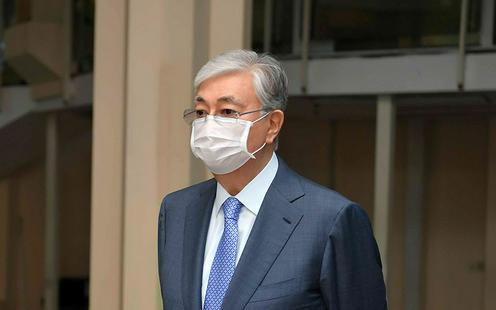 Qasym-Zhomart Toqaev. Photo from the press office of the Akorda

During a video conference session of the Supreme Eurasian Economic Council yesterday, Kazakh president Qasym-Zhomart Toqaev called for delaying ratification of the proposed “Strategic Directions for the Development of Eurasian Economic Integration until 2025”. Speaking to fellow heads of state of member nations, Toqaev also suggested that representation on the Eurasian Economic Commission should be equal for all member states and not depend on funding, and argued against the expansion of its powers. Details of the meeting were reported by state news channel Khabar 24.

In his speech, Toqaev took issue with the fact that Commission representatives had been publicising ratification of the document even before the meeting took place, calling this an “inappropriate leap ahead”. He said that, in his view, ratification of the document should be delayed until member-states’ heads can meet in person, whenever this may be. “In general, I support the idea of ratification, yet in my view there are several issues that require further discussion and elaboration,” he said.

In general terms, Toqaev argued that, in its current form, the project unduly infringes member-states’ governmental and parliamentary sovereignty. Existing bilateral partnerships between member-states, he said, touch on “practically the whole spectrum of economic, social and humanitarian relations”, and so resolving such questions in a five-party format through the Eurasian Economic Commission could complicate their practical implementation. And fully including health, education, and science issues in the sphere of competence of the Commission could “essentially alter its economic focus and, in other words, contradict the essence of the Treaty on the formation of the EAEU from 2015”, Toqaev argued.

He also stated that the “harmonization and unification” of legislation envisaged in the Strategy – in customs laws, regulatory statutes and consumer rights – was excessive. “This will lead to the Strategy’s rejection by national-level public opinion, since the Strategy infringes on the sovereign rights of the government and of parliament,” he said.

Plans to provide the Eurasian Economic Commission with the right to participate in bilateral talks between member-states and third-party countries on trade in services were also in need of further consideration, in the Kazakh president’s view.

Toqaev, however, described EAEU cooperation as a key element in post-lockdown economic revival and welcomed Uzbekistan’s decision to join the EAEU with observer status.

At the same meeting, Kyrgyz president Sooronbay Jeenbekov accused Kazakhstan of blocking delivery of essential goods during the COVID-19 pandemic. “We came to an agreement on the establishment of ‘green corridors’ for the delivery of essential goods. Despite this, some Union member-states are strengthening controls and introducing restrictions on food deliveries,” Jeenbekov said. Kazakhstan is of course the only member of the Eurasian Economic Union that shares a border with Kyrgyzstan. The Kyrgyz president proposed granting the Eurasian Economic Commission the right in such cases to request the EAEU court to impose fines.

The project “Strategic Directions for the Development of Eurasian Economic Integration until 2025” contains 330 points, or mechanisms, for the further economic integration of member-states Kazakhstan, Kyrgyzstan, Russia, Belarus and Armenia. It entails the ratification of 13 international treaties and more than 60 EAEU legal acts, plus around 25 amendments and additions to the original Treaty on the Eurasian Economic Union.