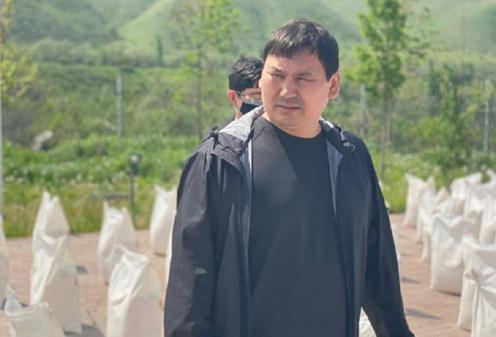 Almazbek Atambaev’s son Seid is the latest high-profile case of pneumonia . Photo from his Facebook page

Kyrgyzstan set a new record for daily confirmed coronavirus infections yesterday, with 526 detected cases of the virus. The previous record of 439 was set the day before, while 506 new cases have been recorded today. This marks a sharp increase from the start of June, when barely 30 new cases were being registered each day.

Death figures, too, have risen steeply in recent days, with a new record of 10 COVID-19 deaths being reported today.

The official figures, however, represent only a fraction of the true extent of the current crisis since the country’s health authorities continue to insist on only counting cases with positive PCR test results in their official coronavirus statistics – despite the fact that such tests are far from 100% reliable.

Meanwhile, a wave of pneumonia cases not officially ascribed to the coronavirus – but almost certainly caused by it – continues to claim far greater numbers of victims than those recorded in the country’s COVID-19 statistics. On 1 July, it was reported that 26 individuals had passed away from pneumonia without a positive PCR test in the previous two days. Yesterday the number was 17, and today a further 23 pneumonia patients without confirmed COVID-19 are said to have died. All in all, 120 people are registered as having died from pneumonia rather than the coronavirus since March (Kyrgyzstan has currently reported 76 COVID-19 deaths) and 1,724 people have been treated for the illness (while the official COVID count currently stands at 6,767).

1,247 pneumonia patients with negative COVID-19 test results are currently reported to be under treatment in hospitals around the country.

Many doctors have argued that these cases must be included in Kyrgyzstan’s coronavirus figures, since pneumonia is otherwise extremely rare at this time of year and PCR tests are often unreliable, particularly in the late stages of the disease as is the case with many of these patients in Kyrgyzstan. By this point, experts say, antibodies are working at full effect and the virus is located in the lungs rather than the throat.

These hospitalised pneumonia patients, in turn, are probably only a fraction of those around the country requiring treatment. State TV has been focusing increasingly on the dangers of samolechenie (self-treatment) in recent days, blaming the rise in severe COVID-19 and pneumonia cases on some people’s refusal to seek medical care in time. Yet, it seems likely that it is the overburdened Kyrgyz health system itself that is helping to produce much of this ostensibly “non-COVID” pneumonia.

Earlier this week, coroner Ainura Asylbekova stated that significant numbers of people were dying of pneumonia in their homes, with coroner callouts doubling in recent weeks because of the current pneumonia wave. “For five days they are unable to get through either to the emergency services or to 118,” Asylbekova said in reference to widely reported problems of inundated emergency hotlines. And yesterday it emerged that three officials of the Ministry of Emergency Situations in three consecutive days had died of pneumonia in their homes after being refused admission to hospital. The local military hospital was reportedly full with civilian patients and told the men to recover at home. “All three were diagnosed with pneumonia,” one local official was reported as saying. “We don’t know for sure whether they had coronavirus, but the hospital told them to stay at home. They were lying ill in their homes for a week and died at home too.”

Kyrgyzstan is currently, perhaps a little after the event, working hard to expand hospital capacity – with a new facility with 300 beds for pneumonia patients being opened at the State Medical Academy. Moves have been ongoing to increase capacity at the former US military base by Manas airport, while politician Omurbek Babanov plans to install a further 40 beds at one Bishkek hotel. A field hospital for pneumonia patients is also being set up in the southern city of Osh. A delivery of 500 oxygen concentrators from China was said to be arriving this morning, with more on their way at a later date, and a major mobilisation of auxiliary medical staff (students, unemployed and overseas medics, staff transfers from the regions to Bishkek) is underway. It seems likely, however, that further tragic decisions about who does and who does not get care will have to be made.