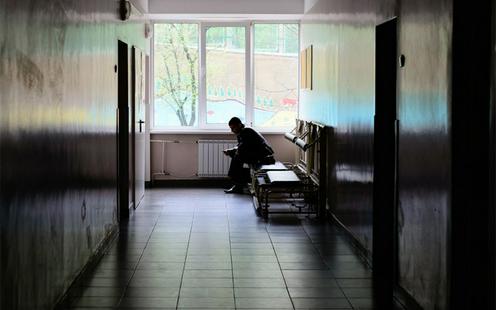 Photo from the IPHR report

Tajikistan invests the least amount of money in healthcare of all the countries of the former Soviet Union – just $55 per capita, more or less equivalent to the amount invested in Afghanistan. This statistic is included in a new report entitled “The Alarming State of the Healthcare System in Tajikistan”, prepared by the Central Asia Program of the Institute for European, Russian and Eurasian Studies (IERES) at George Washington University together with the International Partnership for Human Rights (IPHR).

“For more than 30 years, the lack of investment combined with the authoritarian nature of the leadership has had a negative impact on the medical system and has concomitantly undermined the effective communication between the administration, medical staff and civil society that is essential to its improvement,” the report states. Some decisions instead seem to have been motivated more by political concerns than by medical considerations, “as evidenced by the pressure put on doctors early in 2020 not to report Covid-19 cases in the country”.

One of the poorest countries in Asia, Tajikistan “has seen a significant deterioration in the number and quality of its health professionals over the last two decades”, report author Sebastien Peyrouse writes, and “lacks a sufficient number of medical facilities to serve the 9.5 million population”, while those that do exist are in poor shape.

The report states that the country currently has 170 doctors and 444 nurses for every 100,000 inhabitants – one of the lowest rates in the whole Europe and Central Asia region. Family medicine, too, remains underdeveloped: while a family doctor should serve no more than 1,500 people, the burden per doctor in Tajikistan comes to between 7,000 and 8,000 individuals. The country also lacks specialists – anesthesiologists, dentists, infectologists, narcologists, epidemiologists, psychiatrists and others – and many general practitioners have to fill the functions of pediatricians, therapists, gynecologists and midwives. Besides this, doctors are forced to spend much of their time on administrative tasks, considerably reducing the time they can spend treating patients.

Poor working conditions and extremely low wages for doctors and nurses put young people off from choosing the medical profession, encourage corruption and lead to the emigration of qualified doctors.

The report ends with a number of recommendations for international actors, above all avoiding the temptation to withdraw from corrupt, authoritarian environments, focusing on targeted, smaller assistance programmes and bolstering the capacity of local civil society. Despite its limited resources, the Tajik government can respond to the challenges posed by the shortage of health professionals by “going beyond certain symbolic measures, such as the misguided attempts to convey a feeling of pride among medical staff by composing an anthem dedicated to the profession, or declaring doctors descendants of the Aryan people and heirs to the famous Avicenna” and instead working to raise transparency and promote reforms through constructive dialogue and accurate data drawn from healthcare workers, patients and civil society organisations.

The Tajik authorities of course only acknowledged the presence of the coronavirus on 30 April – one and a half months after infections were first confirmed in Kazakhstan, Kyrgyzstan and Uzbekistan and the day before the arrival of the WHO’s first mission to the country. By the end of May, Health Minister Jaloliddin Abdullozoda was stating that Tajikistan had already passed its infections peak in the middle of that month. Since then, official statistics have shown an ever-decreasing number of new infections, rising numbers of recoveries and very little change in the number of deaths (increasing by just 10 since the start of June). Meanwhile, other Central Asian countries are battling with a severe surge in cases of the virus and a sharp increase in deaths.

To date, Tajikistan has recorded 6,878 cases of COVID-19 (with 5,578 patients already recovered) and 57 deaths. Official data show an 11% rise (almost 2,000 people) in mortalities in the first half of 2020 compared to the equivalent period, but the authorities are refusing to link this to COVID-19.