For several years now, the issue of forced evictions and the demolition of people’s homes by local authorities in Uzbekistan has been one of the country’s most pressing problems. The latest “hotspot” for such incidents has been the Altynsay district of Surkhandarya region. Residents of Khalkobod mahalla (settlement), accused of unlawfully building on appropriated land, decided to resort to all available means to defend their homes from demolition. Arming themselves with spades and stones, they clashed violently with representatives of the local hokimiyat (local government administration) and law enforcement officers who had come to carry out the demolition orders.

A video of the confrontation spread on the internet, showing police officers dragging a number of local residents into a nearby bus. The men in uniform certainly gave no quarter – the video shows a grey-bearded aksakal (old man) who they had knocked to the ground being helped up by some younger neighbours. Another short clip is also circulating on the web, apparently from the same confrontation, showing a man with a bloody forehead. He and several other men are trying to remonstrate to police officers, who ignore them. The level of aggression of all involved is palpable.

The press office of the country’s ministry of internal affairs announced that two police officers had been injured in the conflict. No mention was made of anyone hurt among the local population. Later, the state prosecutor’s office added that, besides the two law enforcement officers, one local resident had been injured, and was being treated at a local accident and emergency department.

Stones thrown by both sides

Why did the conflict flare up, and what made people resort to using spades, axes and sticks?

The first warning of what was to follow came on 8 February, with the visit of a working group tasked with checking the legality of all buildings in the mahalla. The control committee included a number of representatives of the district authorities: the hokim (head of the local administration), the local prosecutor, the police chief, the head of the cadastral agency and others. They warned six families that their homes, located on the territory of the agricultural company Ok-Oltin Manzarasi, had been erected illegally, since the land on which they were built had been earmarked for the growing of cotton and grain crops. In total, the residents had unlawfully occupied 0.39 hectares, on which they constructed homes of various sizes (between 32 and 57 square metres – the total surface area occupied by the buildings was 235 square metres) without any form of permission. The residents were asked to dismantle their homes and return the land to the government within 48 hours, in return for which they were promised an alternative plot of land to build on. Ultimately, the six families were left with the choice – either they ignore the officials’ demands and remain in their homes, or they dismantle their homes and end up on the streets.

The working group’s second visit was took place on 14 February. Seeing that the houses remained standing, the officials conducted “explanatory work” with the residents and then, according to 71-year-old Gaffor-Bobo Mirzayev, brought in 15 vehicles and tried to begin demolishing the buildings. The homeowners and their families attempted to block their access. The officials called in a local police unit and the prospective evictees again put up resistance.

According to witnesses, the police officers attempted to evict the local residents by force. Particularly aggressive were a number of non-uniformed individuals, who, witnesses say, were the ones who provoked the initial clashes. Gaffor-Bobo Mirzayev, who ended up right in the middle of the events, claims that the head of the district police department, also named Mirzayev, not only directed the fighting but also threw some punches himself.

Police officers dragged people onto the waiting bus without distinction – women and children too. “They dragged me along the ground for about ten metres,” says 53-year-old Fotima Mirzayeva. “I lost consciousness from their blows. I was later told that some neighbours came to my defence and rescued me from the police.” 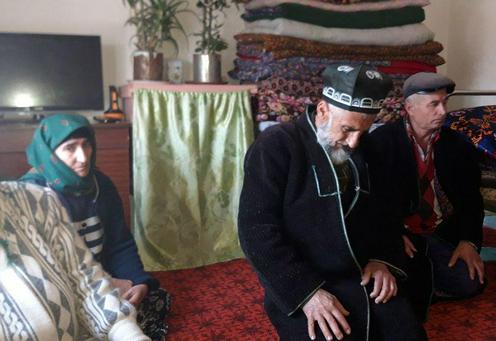 Zargul Kholmurodova rushed to defend her husband and her father-in-law when police dragged them off to the nearby bus. But despite the fact that she was pregnant, she too was shoved on board and taken off to the district police station. After tearful pleas, the police dumped her at the roadside halfway.

Urinboy Kholmurodov stated that he had only seen such violence before at the cinema. “From both sides, people started throwing stones. I saw my son-in-law on the ground being kicked. Whether somebody hit me or I fell, I don’t know, but when I came to, I was lying on the ground. The first thing I remember is a police officer hitting me in the chest. I got up and walked over to the bus,” the local resident related.

At the local police station, after taking statements from all who had been forcibly brought there, the Khalkobod residents were released. Ilhom Mukhammadiyev, who suffered a head injury from a thrown stone, was taken to Termez city hospital.

Temporarily at least, it seems that the residents of Khalkobod mahalla were successful in defending their homes. The Altynsay district prosecutor’s office confirmed that the illegal buildings were still yet to be demolished, adding that a preliminary inquiry was underway into the events.

Surkhandarya regional hokim Tura Bobolov spoke to angry local residents and promised them that their homes would only be demolished after they have managed to build new homes for themselves elsewhere. Commenting on the actions of the working group, the regional head said that, in this instance, district officials, local police and the district prosecutor had “gotten slightly ahead of themselves”.

The incident was furiously debated on social media, thanks in part to a post by Alisher Kadyrov, deputy speaker of the country’s legislative chamber, the Oliy Majlis, and parliamentary leader of the Democratic Milliy Tiklanish Party. He put the blame for the conflict in Altynsay squarely on local residents and called for those who resisted law enforcement officers to be punished.

“The gross violation of the law committed by a group of local residents in the Altynsay district of Surkhandarya region, the attempts to undermine public order, should be treated as a serious offence, a violation not just of our laws, but also of our values,” wrote the deputy on his Facebook page.

Engaged in debate with other Facebook users, Kadyrov underlined that, in his view, it was not the local population as a whole who were guilty, but only those families who had appropriated the land and involved themselves in a confrontation with the authorities. In any case, he said, attacking law enforcement officers was clearly wrong. “If we don’t punish these actions, are we to resolve all our problems from now on using force? I am against this!” the MP wrote.

The debate about who was right and who was wrong continues. The majority of comments on social media have taken the side of the villagers, considering their aggressive behaviour in this instance practically a matter of self-defence. When people come to knock down your house and throw your family out on the streets, social media users argue, it is hard to just sit back and watch. The search for a guilty party leads not to a concrete individual, but to “officials who failed to look into the matter properly”. Indeed, why did the managers of the agricultural enterprise and local cadastral officials fail to act while the houses were being erected on agricultural land? According to Khalkobod residents, they took over the plot of land back in 2008. In 2016, they laid the foundations for some new buildings, but district hokimiyat officials tore them down. Two years after this, people continued to erect their houses there. The only problem was that they were not issued with the necessary cadastral documents. 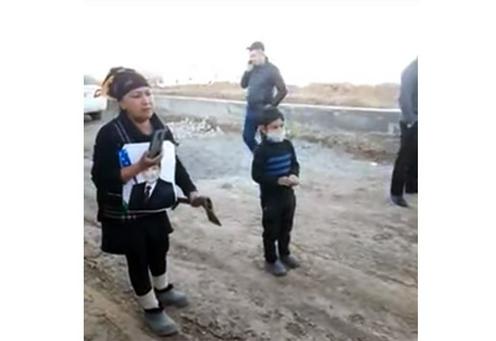 A woman holding an axe and a portrait of Shavkat Mirziyoyev. Still image from a video on the YouTube channel of Aziz Abdusalomov

As unpleasant as the events in Khalkobod ended up being, the whole matter could in fact have been settled legally before 1 May 2019. Up until this date, an “amnesty” on illegal constructions had been in force across the country. Uzbek citizens were given the chance to hand in documents to apply for certification of their property rights to land on which they had unlawfully built their homes. Khalkobod residents repeatedly applied for such certification but are still yet to receive a reply.

This is not the first time residents in Surkhandarya have taken up arms in defence their properties. Just over a week ago, in the Saryasi district, a woman who, as it later emerged, the authorities had already evicted from a previous residence, came out to meet local hokimiyat officials with an axe in her hand and a portrait of the president of Uzbekistan, Shavkat Mirziyoyev, hanging around her neck. In any case, the woman said, determined to stand up for her rights, there was plenty of petrol in the house, and she promised to set it on fire should anyone set foot in her home. No information of anyone being injured in the incident, or of whether her house was indeed demolished, has been reported. It seems as if the “amulet” in the form of a photo of the head of state might actually have worked.

Perhaps other Uzbeks will follow her lead and start defending their homes with banners with Mirziyoyev’s face on them? This does not seem unlikely, as long as there are no other peaceful alternatives in the fight against local officials who are set on demolishing houses without warning and without adequate compensation.

Note: Since this article was originally published, a woman in the Kashkadarya region of the country set herself on fire in front of the regional prosecutor’s office in protest at the authorities’ unwillingness to consider documentation that she felt should prevent the demolition of her home. In another incident in the same region in July last year, a local businessmen set a local official on fire when he came to knock down his shop. On 21 January this year, a woman in Samarkand attempted to set on fire a couple of local officials who had come to evict her ahead of another demolition.

On 24 February, the Uzbek justice ministry hinted that a new wave of demolitions may be imminent, stating that 23,000 families around the country could be at risk of losing their homes.