How ordinary Kyrgyz citizens are struggling under extraordinary circumstances 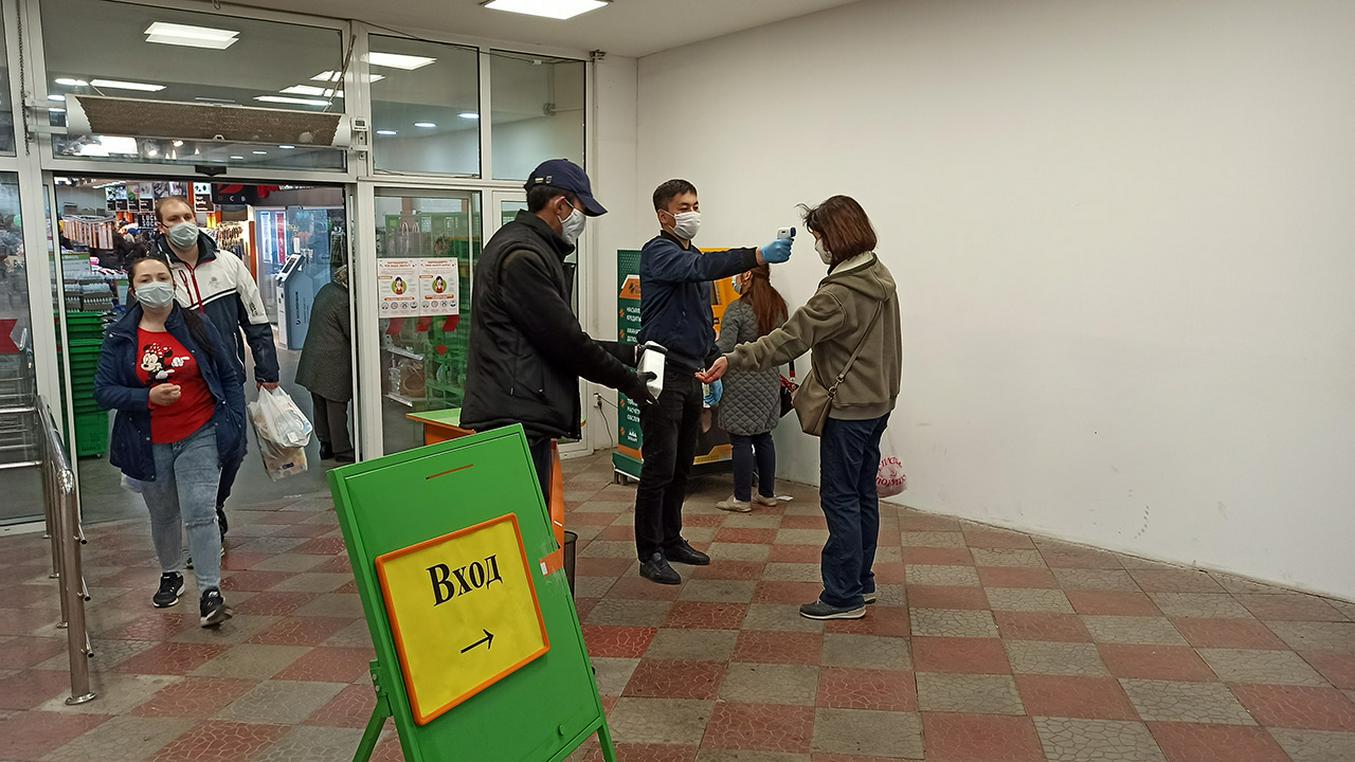 The entrance to a supermarket in Bishkek. Photo by Fergana

For two weeks now, Kyrgyzstan has been under a state of emergency due to the COVID-19 coronavirus. On 25 March, a state of emergency was declared in the cities of Bishkek, Osh, and Jalal-Abad, and in the Nookat and Kara-Suu districts of Osh region and the Suzak district of Jalal-Abad region. Officially, the rest of the country remains on the less severe setting of “emergency situation” (chrezvychaynaya situatsiya, as opposed to chrezvychaynoe polozhenie). In practice, however, the local authorities in many towns, districts and villages pay scant attention to the distinction between “emergency situation” and “state of emergency” and are simply implementing the same extensive measures to stop the spread of the virus that are being applied in Bishkek. (For information on these measures as of 1 April, please see our earlier article on the subject, as well more recent news stories. They include stay-at-home orders, the closure of many workplaces, suspension of public transport, a ban on non-urgent car travel and a curfew from 8 pm).

There have been no particular protests from the Kyrgyz public – all agree on the need to stop a steep rise in infections. At present Kyrgyzstan has 270 confirmed cases of COVID-19 (with 4 deaths) and the virus has spread to almost all regions of the country. Nevertheless, life under a lockdown is not easy. People are losing their incomes and watching anxiously as often limited savings are rapidly depleted, with rising numbers pressed into increasingly desperate circumstances (and far, far worse to come, according to labour ministry calculations). Others, such as key workers, who are still required to work are encountering great difficulties getting to their places of employment. We spoke to ordinary members of the Kyrgyz public and asked them how they are getting by in these extremely testing times.

– I work in the payment cards department. There are 15 in the department, but now only 8 of us are working. The other seven have been placed on enforced leave, but if the quarantine continues after 15 April, this will change to unpaid leave. Those working in the loans department have also been placed on leave. But we tellers are still working. We sit in the office wearing masks and gloves. There are no plans to fire any staff at the moment, but everything depends on how long the state of emergency lasts. 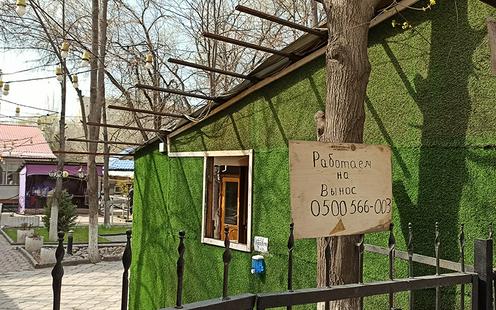 Closed gate at a canteen in Bishkek. The sign reads: “We work by delivery only”. Photo by Fergana

Now all small business owners – hairdressers, market sellers and so on – are coming into the bank and applying to defer repayments on their loans. We give them a new agreement with a three month deferment, but then the interest and everything else is different. A lot of customers are not happy with this. They misunderstood the National Bank’s recommendation about deferred payments. They want to get out of paying interest for three months and for everything else to remain the same. But we can’t do that, the bank is also making big losses at the moment.

Things are not too bad for me at work, but at home it’s a bit more complicated. I live with my mum and my brother. Mum is now on unpaid leave and my brother has lost his job because of the quarantine. That means that for the rest of April at least, I will have to support all three of us. It’s a good thing they’ve kept us on full salary. I’m glad that school and nursery teachers will also be paid for the whole month.

I won’t pretend that we, too, didn’t succumb to panic. We bought up as much flour, buckwheat, toilet paper and detergents as we could. The prices were a little more expensive than normal. Now the whole of Issyk-Kul region is closed off, there are no marshrutkas or taxis, and I take my passport and my permit from work with me everywhere I go, because they check. There are far less people on the streets than normal, but lots of police. Vehicles with loudspeakers on top are driving around telling people to stay at home.

Bayir Aliyev, 19, hookah master at a bar in Bishkek 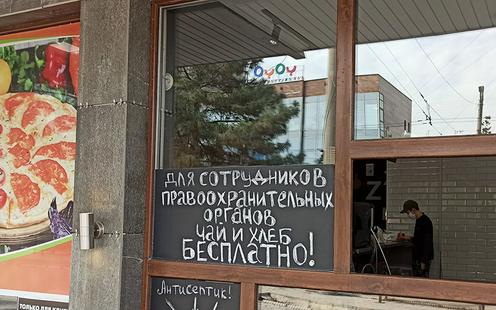 “Tea and bread free for healthcare workers!”. Photo by Fergana

– Due to the coronavirus, bars and other similar businesses have been closed. As early as 21 March, the police came and wanted to shut us down. There weren’t many customers so the owners decided to close. I was earning around 1,000 soms ($12.50) a day. I’m not originally from the capital, so I quickly got bored on my own in my rented apartment in Bishkek. I went back to my hometown. But when all this is over, I can go back and pick things up again no problem. It’s pretty boring here with nothing to do. As for money, I’m okay – my father runs a small business and he’ll help me out.

Adina, 35, housewife in a suburb in Osh

– My husband and I have four kids. The eldest is already a student, the youngest is 18 months. At the moment we have enough food for a month, and we’re staying at home. My husband is a journalist with a state media outlet. They’ve all been sent home, but are still being paid. We’re not well-off, so I’m worried about the quarantine dragging on.

– I have two small children. My husband worked as a pharmacist for a private pharmaceuticals company, and from 25 March they were all put on leave. Now I’m worried about paying the rent. We were supposed to pay it on 30 March but we don’t have any money. The landlord called and demanded that we pay immediately; she said she has loans to pay back and can’t accept a deferment. And we haven’t really stocked up on food... However hard I try to find a job that I can do from home, nothing works out.

– I live with my husband. I had a job in a café, making salads. Now there’s no work and we’ve got no money. We ran out of food a few days ago already, and I had to ask the volunteers for help. I don’t know what to do. We’re getting more and more into debt on the apartment. I’ve asked for financial assistance, but they’re only giving food. (Note: the Kyrgyz government recently announced that assistance to vulnerable groups in society in connection with the current crisis will be in the form of food handouts only – mainly flour).

– Salary bonuses due to the COVID-19 epidemic have been given to front-line healthcare workers, not to us endocrinologists. But our work schedule has been altered – now we work without days off, every day from nine till five. Donors have provided us with protective clothing.

Public transport has been suspended and the vehicles allocated by the health ministry to transport medical workers don’t run at the right times for us. Those who live in Bishkek go to work on foot. Colleagues who live outside the city have to get through the checkpoints, catching rides with neighbours, relatives, by any means they can. We just do everything we can to get to work on time.

Costs have increased, we have to pay more for food now. But above all we’re worried about our patients. Our volunteers on bikes are distributing insulin to six thousand diabetics around the city. We’re currently looking for donors who can provide them with paper bags, protective clothing and masks.

A deserted avenue in Bishkek. Photo by Fergana

– Yes, we walk to work. The lack of transport has hit the extra staff like cleaners, guards and drivers especially hard, because the health ministry has arranged transport only for doctors and nurses. Two of our guards come from outside the city by bike. About 50 people work here and ten of them are finding it difficult to get to work.

At the start we had to buy our own protective gear, but now the health ministry is providing it. There was a shortage of simple things like cleaning materials, but now donors are helping us.

Angelina (pseudonym), doctor at a maternity hospital in the Chuy region

– After the declaration of a state of emergency, it’s been more difficult to get to work, and since our hours are so irregular, we partly fall under the curfew. Now those who live far away are being given a ride in by colleagues. Every morning they have to write out a special list to be checked at the checkpoints, because a doctor’s ID and attestation from work are not enough. The government allocated buses to transport medical workers to work, but our institution didn’t make it onto the list.

The situation has had no impact on the number of our patients, there are still lots of them. Pregnant women with suspected coronavirus infections are being placed under observation in another maternity hospital.

At the start, our doctors had no protective gear and came into contact with those who could have been in close contact with infected individuals. There were also no gloves. Then through relatives and contacts we got hold of gloves, alcohol wipes and sanitiser gel. We spend a lot on masks. We ordered respirators from China, but they haven’t arrived yet...

A huge number of con men have appeared, trying to sell poor doctors home-made medical gowns and protective equipment that hasn’t been through any kind of safety checks. And doctors are forced to take them, because they need to work now and don’t have time to sit around waiting for deliveries to turn up. It’s really sad to see.

Translated and adapted by Nick L.