Tell it to the wind 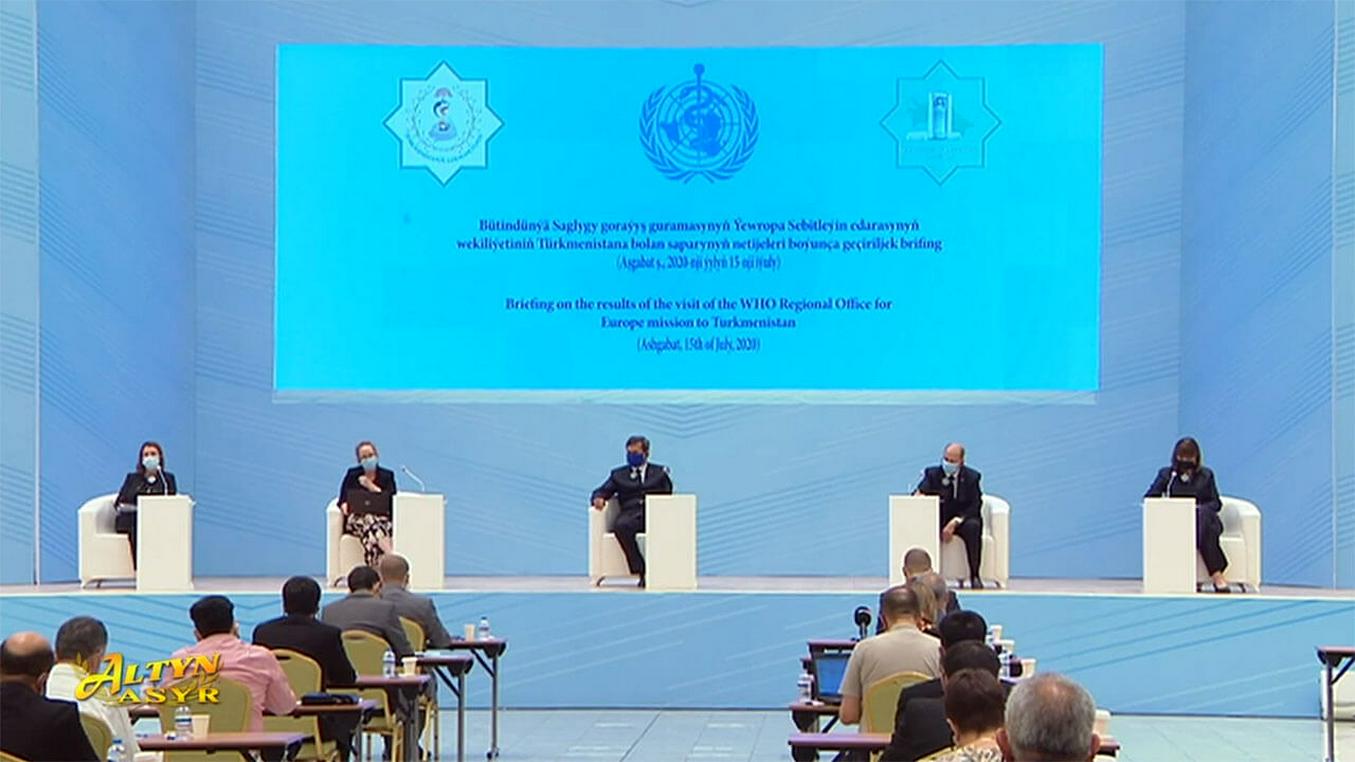 The WHO mission briefing yesterday. Photo from Chronicles of Turkmenistan

The World Health Organisation’s mission to Turkmenistan has concluded its visit by studiously avoiding contradicting the government’s official line on the absence of the coronavirus and praising the country’s preparedness to fight COVID-19, should the virus be detected there.

At a press briefing dedicated to the results of the WHO team’s inspection, mission head Catherine Smallwood did not offer any independent evaluation of the presence of COVID-19 in the country, referring instead to information from the country’s health ministry. “To date, Turkmenistan has not reported any confirmed cases of coronavirus infections in the country. It has not reported any cases to the WHO,” she said simply.

Smallwood stated that, ahead of the visit, the team had asked to be given access to specific sites. “The schedule for the visit was agreed by both sides, and they allowed us to inspect all the facilities that were of interest to us.” The results of the inspection were the following: “We can say that Turkmenistan possesses a good hospital infrastructure. They are very well equipped. We did not see high levels of hospital occupancy or significant numbers of patients with respiratory illnesses. Everything is therefore ready and prepared to start to take in coronavirus patients.” The WHO representative also positively appraised the measures taken by the Turkmen government to ward off an epidemic, such as restricting bus and train travel between regions and introducing the use of face masks in public.

The Turkmen authorities were not given an entirely free ride, however. Advising the government to act “as if COVID-19 was circulating”, Smallwood added: “We are aware and concerned about reports of increased cases of acute respiratory disease or pneumonia of unknown cause; therefore, we recommend that surveillance and testing systems are scaled up, and that samples are sent to WHO reference laboratories for confirmed testing, as most countries have been doing in early stages of their outbreaks.”

The WHO, she stressed, “also expects, in line with all countries’ rights and obligations under the International Health Regulations, that any unusual or unexpected public health events are reported to WHO, regardless of the origin or the source.”

In reply to journalists’ questions about how many people in the country have been tested for the virus and how many tests are conducted each day, the mission representatives promised to provide all the relevant figures in their final report, but stated that the country’s central laboratory has carried out more than 60,000 tests.

Opposition news sites and US-funded Azatlyk have of course been writing for weeks of a rising wave of pneumonia cases and fatalities in the country. Turkmen.News has today listed a number of high-profile figures said to have passed away from pneumonia over the last two weeks, including state TV employee Charyguly Avlikuliev (whose twin brother is said to remain connected to a ventilator), Turkish embassy religious affairs adviser Kemal Uçkun, adviser to the Turkmen president on oil matters Yagshigeldi Kakaev, Russian language and literature professor Bahar Kopekova, businessman Gennady Abakumov, and maths professor Babamurat Mukhyev. Azatlyk’s sources are reporting that dozens of patients with positive coronavirus tests are now dying in Ashgabat hospitals every day, including around 40 a day at the city’s cardiology hospital alone.

As previously covered, independent media have also alleged that the Turkmen authorities used the time they won by delaying the arrival of the WHO mission to shuffle coronavirus patients safely out of sight and set up a false façade of well-equipped and relatively empty hospitals. Given the sudden U-turn on face masks and implementation of a partial lockdown at the very moment that the WHO team arrived, it seemed possible that the Turkmen authorities might attempt what could be called “pulling a Tajikistan” and announce their first official cases of the virus in connection with the WHO mission. Sources speaking to opposition outlet Turkmen.News said that the government had acknowledged the presence of COVID-19 cases to the WHO team and allowed them to see some patients, but were maintaining that “the situation is not so critical”.

Instead, though, the Turkmen regime seems to have latched onto an implausible catch-all explanation that justifies the current measures while leaving it open to admit cases yet deny responsibility if the epidemic becomes unmaskable at some point in the future. The line apparently first aired in the pro-government media on 6 July (the day the WHO mission arrived) was that face masks are now necessary for public-facing employees and those with fragile health on account of wind-borne dust and unspecified “pathogenic substances” blowing into the country from abroad. 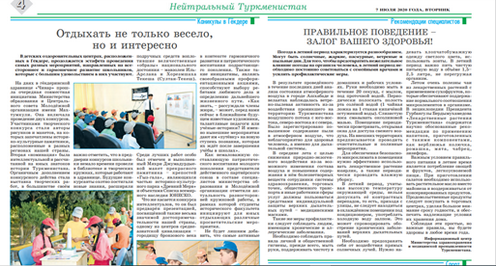 An article in state-run newspaper Neutral Turkmenistan the following day then expanded the scope of this meteorological justification in a rather confusing way. “Weather in the summer season is characterized by its variability,” the article begins. “There can be sunny, hot, gloomy, windy and dusty days. In order to avoid unwanted effects of the weather on the human body, in the summer period it is necessary to be in constant consultation with your family doctor and strengthen prophylactic measures.” Such measures, the paper explains, include following the rules of personal and social hygiene, above all washing hands with soap for at least 20 seconds. One should also gargle salt water, rub oxoline cream (a commonly-used anti-viral ointment in the former Soviet Union) on your nose and regularly air inside spaces (surely not such a good idea in the event of wind-borne dust?). Copious use of herbala is of course also recommended, but one should not subject oneself to extreme temperature contrasts, stand under an operating air-conditioning unit or drink too much cold water in one go. “In the summer, it is very beneficial to drink tea made from medicinal herbs and add dried fruits,” the article adds, before predictably referring readers to President Gurbanguly Berdimuhamedow’s own encyclopedia Medicinal Herbs of Turkmenistan.

In all this there was no mention of the coronavirus, which had to settle for the role of a rather large elephant in the room. All of the advice was phrased as general, commonsense recommendations to be applied “in the summer period”, “in the summertime”. Why this was all perfectly normal behavior now and not in previous summers was clearly not a problem for the article’s authors – one can only assume that ordinary Turkmens are so used to being gaslit by their own government that it was felt that they might not notice.

Berdimuhamedow himself then steered things a little more clearly in the direction of the current pandemic in a telephone call with Kazakhstan’s First President Nursultan Nazarbaev on 10 July. On the subject of COVID-19, the Turkmen leader opened for the more explicit inclusion of the coronavirus in the “wind current” theory – and presumably somewhat blindsided the Elbasy – with the following declaration, reported in a summary of the conversation by state news agency TDH: “As is known, substances detrimental to human health, including viruses, can be carried by air currents, especially in a complicated ecological environment. Central Asia is one of the most sensitive and vulnerable regions of the world from an ecological point of view. One of the main reasons for this is the problem of the Aral Sea. Air masses that are formed in the Aral zone and spread over a wide geographic area have a negative effect on nature and the climate and pose a particular threat to the health of people who live not only in this region, but also beyond it.

“Turkmenistan, an advocate for the formation of a special UN programme for the Aral Sea basin, is taking concrete steps to develop this initiative,” Berdimuhamedow added proudly.

Expanding the face mask recommendation to all on 12 July (which has apparently since been made obligatory), an official health ministry announcement reiterated the wind-borne-dust-slash-summer-weather explanation, adding the need to observe social distancing of “at least one metre”, but making no mention of COVID-19.

To return, finally, to the WHO mission, the same line was apparently repeated at yesterday’s press conference, with Turkmen health minister Nurmuhammet Amannepesov asserting that the government was concerned about “air masses formed in the environmental disaster area” of the former Aral Sea. Deputy PM Rashid Meredov followed up by announcing that the authorities had deployed airplanes to disinfect the air in certain parts of the country.

One can only hope that the now-mandatory face masks helped the WHO team members to keep some semblance of a straight face.