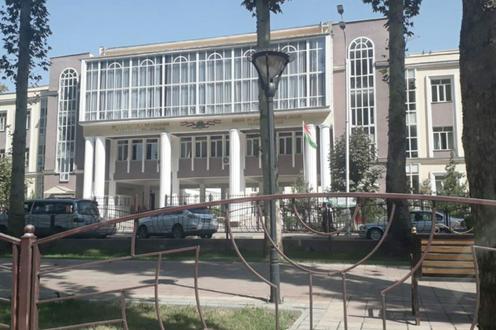 Dushanbe College No.1 . Photo from Ozodi.org

Students at Dushanbe’s College No.1 have been sent home following the death of the school’s sports teacher, Khurshed Karimov, from a lung illness, Ozodi reports (in Russian), citing pupils, parents and teachers at the school.

The teacher’s illness and death were announced on 22 April. Parents were informed that the college has been temporarily closed and asked to await further information as to when it will reopen. The parents themselves were told to continue going to work as usual.

Karimov was hospitalised two weeks ago with symptoms of pneumonia, one of the college’s teachers said on condition of anonymity. According to one of the deceased’s relatives, Karimov’s body was not handed over to his family but rather buried in a funeral shroud soaked in bleach. “Khurshed’s health deteriorated two days ago. He was able to call all his relatives and say goodbye,” the source added.

That the college’s more than 400 pupils have all been told to stay at home has been confirmed, but Dushanbe health department has stated that there is no cause for concern.

The head of the city’s education department, Asomiddin Boboev, said that as soon as anyone passes away these days people wonder whether they died from the coronavirus or from pneumonia. “At the moment, all of the capital’s education establishments are being disinfected. According to the schedule, College No.1 is to be disinfected today or tomorrow. On Saturday and Sunday alone, more than 65 educational establishments in the city underwent disinfection,” Boboev added.

Repeated stories about deaths from lung and heart ailments have been coming in recently in Tajikistan, and this is not the first report of subsequent quarantine measures and unusual burials. Last week, the burial service for a man recorded as dying from tuberculosis was reportedly carried out without the man’s body, which had been buried by the authorities at an undisclosed location. A few weeks ago, following the death of one man from pneumonia, all of his relatives were quarantined and eight members of one family in the same village were later hospitalised with high temperatures.

A few days ago, a man who died of pneumonia in Dushanbe was buried in a closed coffin without family members being allowed to open the lid. The whole of the man’s family was placed in quarantine, as, apparently, were those who had been treated in the same hospital ward as him.

The Tajik health authorities continue to maintain that there are no cases of coronavirus in the country and that coronavirus test results in the above and other instances have come back negative. The rise in pneumonia cases, officials say, is seasonal and the result of “unfavourable weather conditions”. According to the health ministry, 1,031 people in Tajikistan died from respiratory illnesses such as pneumonia last year.

The head of the WHO’s office in Tajikistan, Galina Perfilieva, stated recently that tests have not confirmed the presence of the coronavirus in the country, despite the fact that “the level of qualification of specialists and the quality of diagnosis correspond to international standards”.