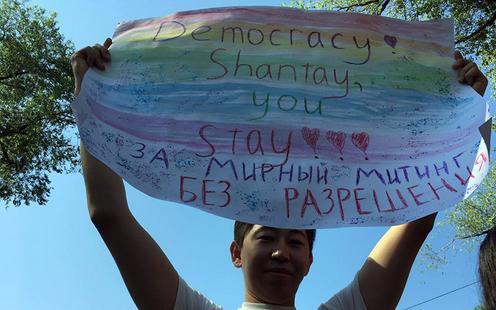 At a demonstration for freedom of assembly in Almaty. Photo by Bagdat Asylbek, Fergana

International human rights organisations have written to Kazakh president Qasym-Zhomart Toqaev to criticise a new draft law on public assembly that is currently under discussion in parliament. Fergana has obtained a copy of the NGOs’ joint letter.

The rights organisations argue that a number of important aspects relating to the regulation of public assemblies do not comply with international standards. They underline that the right to peaceful assembly is guaranteed by the UN’s International Covenant on Civil and Political Rights (ICCPR), to which Kazakhstan is a party.

In particular, they write, international standards stipulate that public assembly be a right, and not a privilege, and should thus not require government permission. If the law demands “notification” from meeting organisers then this process must not be complicated and bureaucratic. In practice, a notification regime for public assembly can easily turn into an authorisation regime, and the UN has emphasised that this violates people’s rights.

Formally, the Kazakh draft law on public assembly stipulates that organisers must notify the authorities, and also file a “request for agreement”. However, the rights organisations believe that, in essence, this is an authorisation regime by another name. In particular, while planning an event, organisers are permitted to publicise the event only after they have received an answer from the authorities. In addition, the draft law makes no mention of spontaneous assemblies, although they are also provided for by the ICCPR.

The NGOs also argue that the new bill discriminates when defining those who are able to act as organisers, depriving foreigners and unregistered organisations of this right. Finally, the law restricts the holding of assemblies to specially designated locations (critics of the draft law have pointed out that in many towns and cities this has been set as a square on the outskirts of town).

The letter’s authors therefore called on the government to send the draft bill back for public discussion, as well as for appraisal by the OSCE or the office of the UN High Commissioner for Human Rights.

At present in Kazakhstan, organisers of public gatherings are required to obtain permission from local executive organs, something which is rarely forthcoming. Where permission is granted, it often comes after a long series of refusals, disrupting organisers’ attempts at planning. Occasionally, activists carry out unauthorised meetings, which frequently end in mass arrests followed by the filing of administrative charges against organisers and some participants.

At the end of 2019, the president of Kazakhstan came out in favour of a transition to a notification system for public gatherings. Kazakh society needs to be trained in the culture of public assembly and the responsible expression of its opinions, Toqaev stated at the time. The relevant draft law went through the lower chamber of parliament, and on 30 April it was approved by the senate on the first reading. In spite of its declared aims, the document has been criticised by human rights groups in Kazakhstan. Discussing the new bill, the director of the Kazakhstan International Bureau for Human Rights, Yevgeny Zhovtis, stated that it “not only bears a restrictive character (veiled by provisions such as the sending of notification and a three-day period for the authorities to provide an answer, which may be a refusal), but also deliberately adopts a hostile stance towards the very phenomenon of peaceful gathering”.