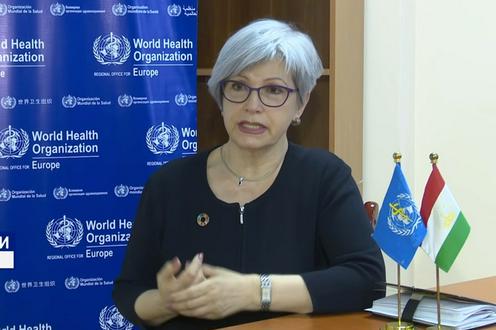 The World Health Organisation’s permanent representative in Tajikistan, Galina Perfilieva, is to leave her post. Perfilieva herself made the announcement in an interview with Sputnik Tajikistan (in Russian).

“I’m not stepping down,” Perfilieva said, “I was only appointed to this position temporarily. I was due to retire from the WHO a long time ago, so that’s why my contract is expiring.” She also asked journalists not to interfere with the WHO’s work in Tajikistan. “The most important thing right now is the work of the mission, not questions that you are desperate to have answered immediately,” the WHO’s permanent representative said.

For a long time, Galina Perfilieva supported the official position of the Tajik health ministry that the country was free of the coronavirus. Following the announcement of the WHO mission to check the coronavirus situation in Tajikistan, Perfilieva changed her stance somewhat, arguing that it was impossible to categorically assert that there were no cases of the virus in the country, since there are asymptomatic forms of COVID-19. “The job of the WHO is not to find the virus,” she added at the time, “but to help our medical colleagues to fight it.”

Perfilieva has since come under fire both on social media and from Tajik opposition groups for effectively abetting the Tajik authorities’ efforts to cover up the spread of the coronavirus.

Throughout April, reports grew of mounting pneumonia deaths in Tajikistan, but the authorities attributed the rise to “unfavourable weather conditions”. The Tajik government final acknowledged the presence of COVID-19 in the country on 30 April, the day before the arrival of the WHO mission. To date, Tajikistan has reported 461 cases of the virus and 12 deaths (the same number of deaths as Kyrgyzstan, which confirmed its first cases nearly two months ago), though the fact that the leaders of two of the country’s political parties are among those diagnosed with the virus make it highly unlikely that the real number of cases are anything like this low. Public events have been banned and schools closed, but there is no general lockdown as seen in other Central Asian countries and elsewhere around the world.

Kyrgyzstan yesterday announced that it would be strengthening security at border crossings along the border with Tajikistan following the sharp rise in the number of cases there.

The announcement came several hours after four Kyrgyz students returning from Tajikistan tested positive for COVID-19 at the border.