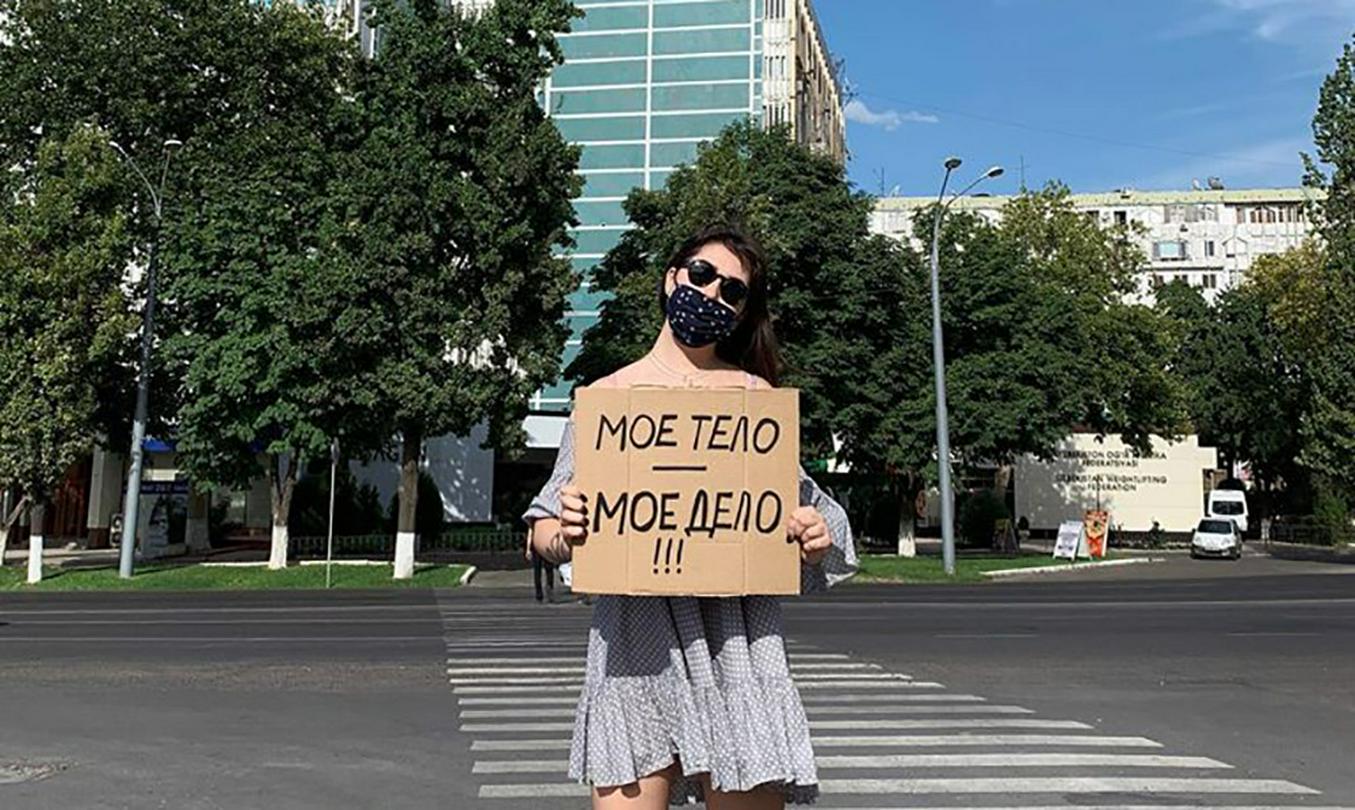 A campaign participant. The sign declares the (rhyming) Russian equivalent of the slogan “My body, my choice”. Photo from the Facebook page of Exponaut Art Gallery

An online campaign organised by the art group Exponaut garnered considerable public attention recently in Uzbekistan. Young women put up photos of themselves on social media standing in public places holding hand-painted signs with messages such as: “Women are not animals”, “A wife is not a servant”, “My body, my choice”, “Beating means jail” and so on. This was the first public protest action by women in defence of their rights in contemporary Uzbekistan.

The women involved were moved to stage their campaign by a rise in domestic violence that has occurred during the country’s coronavirus lockdowns. The long periods of enforced home isolation, combined with the worsening economic situation, have created a tense atmosphere in many families, as well as in society as a whole.

The public reaction to the campaign was extensive, and far from uniform. Women of the older generation reacted to the protest in a very sceptical fashion: “the girls have been stuck inside too long”, “they’ve got nothing else to do”, “they won’t get anywhere with this stupidity”. Many male commentators responded extremely sarcastically and scathingly, their comments sometimes going over into direct abuse and even threats. For some reason these men perceived the campaign as a direct challenge to them as men.

Yet the campaign was supported by quite a large number of young people. They said that the days of keeping silent were passed. Women and girls who come up against violence and discrimination must be able to conduct an open dialogue with society, while counting on the assistance, trust and understanding of the organs of the state.

“We’ve all been through this kind of thing” 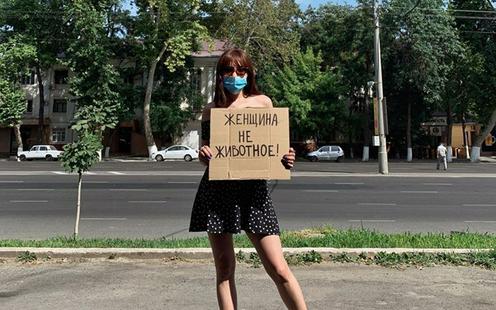 A campaign participant. The Russian-language sign reads “Women are not animals!”

Fergana spoke to Exponaut founder Nigina Khalmukhamedova about the campaign and the reasons why it provoked such a strong public reaction.

– It is a series of 18 successful events over the past 12 months, a partnership with galleries and inspirational people, and also an art platform. We are a multifaceted project covering all spheres of public life, art and culture. Our goal is to raise the level of public interest for art and for questions that are important for the life of our country. Exponaut is an art group that, you could say, “keeps its finger on the pulse” and stays up to date with the global agenda.

– How and why did the idea occur to you to stage such a campaign? Have you yourself been in the kind of situation to which you are trying to draw attention?

– Our whole team feels strongly about issues of gender equality. Recent stories in the news (about a beaten woman in Fergana, the murder of one woman by her own husband, and the suspected murder incident-koson/ of a young woman in Qashqadaryo) served as the trigger to start talking about the problem. The idea for this campaign just came up spontaneously. We are very glad that we were able to organise it all at such short notice and that there were people who supported us. We come up against catcalling, misogyny and more on an almost daily basis.

The main aim of the campaign was to attract public attention to the issue. When society actively discusses some subject or other, it makes an impact and a new agenda for thought and further discussion emerges. We have shown that young women can and want to talk about problems that men don’t even see as problems. Maybe for them these are just “provocative phrases”, but for us and for other young women they are very painful phrases. It might just look like some words on a bit of card, but for us it’s a really important message. We wanted to convey an idea and we did it – that’s the main thing. We were trying to shine some light on a problem, not to belittle anyone or insult them. This is always the case when an oppressed group starts to demand its rights, and the privileged group doesn’t understand them and doesn’t want to lose its grip on its privileges.

– What do you think about the reaction to your campaign? 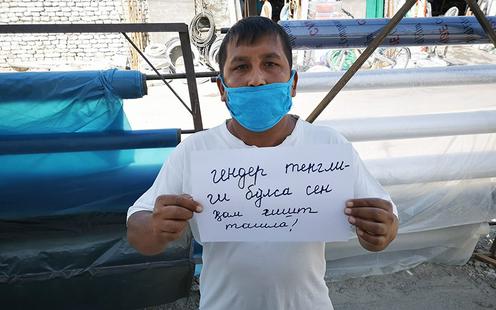 The reaction from famous blogger Dima Qayum. The sign (in Uzbek) reads “If there is such a thing as gender equality, then you carry bricks too!” Photo from his personal Facebook page

– First of all I want to say that we didn’t expect such a strong reaction. Of course, we have mixed feelings on this score. On the one hand, it is great to see that there are such a large number of people who care about the topic. On the other hand, there were a lot of negative, aggressive and unpleasant comments. We even had some threats directed against us. We haven’t gone to the police about any of this yet, for now we’re just planning to leave things on a “peaceful note”. But if things get more serious then we plan to file a report.

Although there was a wave of negativity, we have also received a lot of warm words of support and gratitude. Our aim was to direct public attention to such apparently “trivial” events that have such an effect on our daily lives. We wanted to get a discussion going. In this, it seems, we succeeded, but the level of aggression was beyond all reasonable bounds. Even though the initial message was very peaceful. People we know have been great in giving us support. Lots of people are offering their help and giving us encouragement. Our relatives are worried about the campaign though, since they are concerned for our safety.

We want to get a movement going in the right direction, so we can bring benefit to our society and not just be a passing “hype”. We’re really hoping that our actions today can help to bring about a better future tomorrow.

“It would have been torn to pieces whatever”

– As far as I know, this is the first such campaign by feminists in recent years in our country, Matvienko said. – Finally, women have started to openly state their views, without fear, to stop being silent and to undertake all kinds of (protest) actions. Or maybe something similar has happened before but no one noticed?

We can’t really call this campaign a feminist campaign, because all kinds of people joined in, not only those who define themselves as feminist or pro-feminist. Though it was some young feminists who started it. And the campaign itself is not exclusively female, because some men who support the cause too have started to get involved. 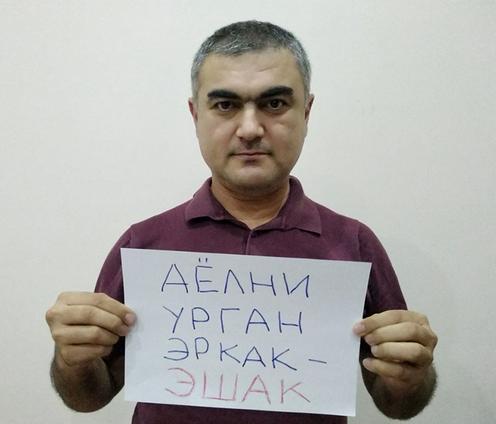 Azizbek Boltaev, a psychotherapist from Bukhara, holds up a sign in Uzbek reading “A man who beats a woman is a donkey”. Photo from his Facebook page

A couple of years ago we organised an online campaign – women put up a black square as their profile picture on Facebook for a day and stayed offline. This was called the “day without women”.

– How important are such action? Do such weapons – slogans on placards – have any real effect?

– In my opinion, such actions do have a real effect. If only because they call attention to the problem. If you look at the comments under these women’s pictures, you can see right into the guts of our society. The signs themselves didn’t contain any orders, telling people how to behave, the women were just talking about themselves, about their own personal values, but even just doing this they were subjected to accusations and attacks. I like the fact that it provoked different reactions, because this uncovers the problems in our society.

The absence of a reaction – from the authorities for example – is also significant. On the whole, the authorities have preferred to act as if nothing is going on, just like with the case involving Evelina. Maybe this is their actual policy – pretend that no gender equality problems exist. There is a de facto embargo on this theme. At the very least they could have instigated some kind of debate. But unfortunately, everything here is silent: either they just don’t notice the problem or they prefer to pretend they can’t see it. Even though equal rights between men and women are guaranteed here by law, for some reason they don’t want any attention drawn to situations where this law is violated.

– Unfortunately, a lot of people saw this campaign as so much empty hype, and said that nothing can be solved by this kind of action. Was it worth undertaking this particular campaign? Perhaps the issue needed to be raised in some other way?

– Any kind of action is always going to find critics who are ready to say that the activists are just riding a wave of “hype” and are doing everything for the sake of money. But it was important to do this thing – activism can take all kinds of forms as long as it doesn’t harm others. These women’s campaign was peaceful, it wasn’t a protest but simply an exercise in self-expression. And however they had framed this campaign, it would have been torn to pieces whatever.

– But still, why was there such aggression and disparagement directed at these young women? And more importantly, and sadly – why didn’t all women support them? 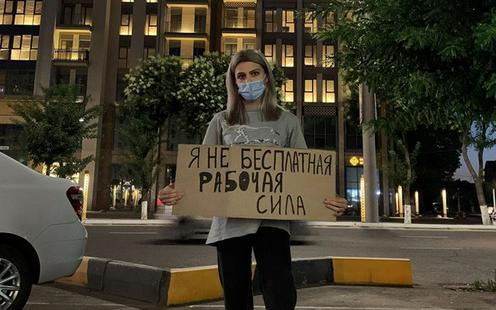 A campaign participant. Photo from the Facebook page of Exponaut Art Gallery

– As far as the negative reaction on the part of men goes – they clearly see this campaign as an infringement of their right to harass women, to see them as a “piece of meat” and criticise them for wearing short shorts. One of the young women, for instance, was photographed in a crop top, and in the comments under the photo people were talking about her as if she was just some product in the market; it just doesn’t occur to them that she is a real living person.

As for the negative reaction from women – it’s just internalised misogyny. In its essence, the patriarchal system is a system set up to control women, and it is very convenient to keep this system running by preventing women from joining together. This is of benefit to those who profess patriarchal values, and these stereotypes are hammered into you from childhood: “women are gossips”, “there’s no such thing as female friendship”, “all women are out to get one another”, “a women’s collective is a nest of vipers” and so on.

Patriarchal society has its own privileged class of oppressors: men, and its unprivileged class: women. In this system, in order to draw close to the privileges, women try to demonstrate that they are not like all the other women, and they start to support patriarchal values. I have written about this in detail in an article I wrote on misogyny.

– Lots of people try to link this to our spiritual values. So standing there holding a sign and making demands on the rest of society – is this not part of the “Eastern mentality”?

– I really don’t understand what nation’s values they are taking as their basis to judge and accuse people. There are common human values and it is these that need to be supported and promoted – the values of humanism and the values that attach priority to the rights of the individual. And we need to clearly understand that when the interests of individuals are pushed into the background, for example in favour of the family, then it is precisely then that violence occurs.

Note: For a foreign audience, perhaps the most interesting of the signs held up by the campaign participants from a socio-ethnic and cultural angle was one not shown in the original Russian-language article, stating (again, in Russian): “Russian does not mean whore”.