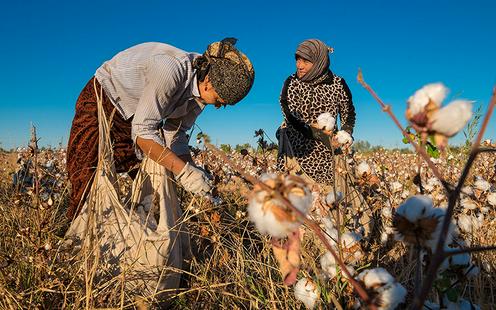 The government of Uzbekistan has called on the international coalition Cotton Campaign to end its boycott of Uzbek cotton. Such a step would help to support the country’s economy through the coronavirus crisis, it is argued in an open letter written by the Minister of Employment and Labour Relations of Uzbekistan, Nozim Khusanov. Khosanov backs up his demand with reference to recent conclusions by the International Labour Organisation (ILO) that “during the cotton harvest of 2019, no instances of the systematic use of forced labour were documented” and that “the systematic use of child labour is no longer practiced”.

Khusanov referred to steps taken by the Uzbek government to eliminate all forms of forced labour in the country. Among other things, at the start of this year a law was passed introducing criminal charges for the use of forced labour. A “Strategy for the Development of Agriculture in the Republic of Uzbekistan 2020-2030” was also ratified, which seeks to reduce the role of the state in the agricultural sector. With respect to cotton in particular, Uzbekistan has renounced state regulation of production, prices and forced sale of the crop.

“However, alongside the demonstrable progress in the elimination of all forms of forced labor over the previous three harvests, there is another, more urgent reason for my call to end the boycott. Uzbekistan is now facing an unprecedented dual threat for public health and economy following the spread of the coronavirus pandemic,” Khusanov writes.

He points out that “today, the labor market of Uzbekistan is facing extraordinary pressure. Over 1.5 million Uzbeks are unemployed. With the country in lockdown, we estimate that nearly 150,000 citizens have already lost their jobs and more than 140,000 migrant workers have returned home without a source of income. More than 200,000 Uzbeks have now fallen below the poverty line.” Huge efforts will need to be undertaken in the country in order to create new jobs for these people.

The employment minister argues that the removal of the cotton boycott could double overall exports of Uzbek textiles, leading to the creation of new jobs in a sector that is one of the country’s leading sources of employment. Currently almost 7,000 firms in the textile sector employ more than 200,000 workers, whose incomes support one million people living in Uzbekistan.

Khusanov adds that an end to the boycott could significantly assist the global fight against COVID-19. An increase in cotton exports to Europe and the US would help to reduce the deficit in PPE (personal protective equipment) materials. Uzbek textile producers have already managed to achieve a tenfold increase in PPE production for the domestic market.

Forced cotton picking has been practiced in Uzbekistan for decades. Huge numbers of both state and private employees, as well as students and school pupils have been routinely called in to help with the harvest, threatened with reprisals should they refuse. In the mid-2000s, the Cotton Campaign gathered around 300 major clothing brands to take part in the Uzbek Cotton Pledge. The companies committed themselves to forego Uzbek cotton until forced labour in the Uzbek cotton industry is totally rooted out. Since the end of the decade, Uzbek cotton has regularly appeared on official blacklists of goods produced with the use of forced labour.

In recent years, the Uzbek authorities have worked to improve the situation. The mass use of child labour has ended, and local authorities have stopped systematically pressuring students, doctors and teachers to take part in the harvest. The labour ministry now acts on complaints it receives of officials who force people out onto the fields and disciplinary measures such as fines are applied.

In September 2018, the United States removed Uzbek cotton from its list of goods produced by child labour. The Cotton Campaign has recognised the progress made in the country, but called for the continuation of the boycott until the situation is fully rectified.

The Cotton Campaign is a coalition that has worked since 2007 to unite international human rights advocates, labour unions, clothing manufacturers and investors in order to bring about the total elimination of the state-led use of child and forced labour in cotton production in Uzbekistan and Turkmenistan. In the winter of 2020, a Cotton Campaign delegation visited Uzbekistan. Its report is expected to be published this spring.