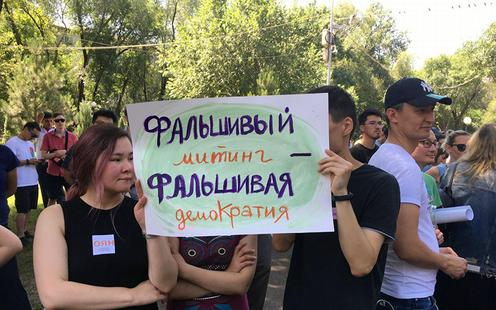 An authorised demonstration in Almaty. Photo by Bagdat Asylbek, Fergana

The Kazakh senate has sent a draft law “On the procedure for organising and holding peaceful assemblies in Kazakhstan” back to the lower chamber of parliament for revision, KazInform reports (in Russian).

Kazakh senators have requested their Mazhilis colleagues to amend a number of the draft law’s articles, as well as to correct several hundred linguistic errors that made their way into the Kazakh-language version of the document.

Senator Sarsenbay Ensegenov said that a total of 16 proposals for amendments had been made in relation to 6 articles, including provisions relating to the duties of event organisers and prohibited actions during peaceful assembly. In particular, he said, the draft law had contained the requirement that event participants not cover their faces, including using clothing or other means that would obstruct facial recognition. “The committee has proposed the removal of this regulation, since in some circumstances participants in peaceful demonstrations need to wear personal protective gear for health reasons,” Ensegenov said. The senate has therefore suggested introducing an amendment that explicitly permits the wearing of personal protective gear.

Extra provisions about PPE, however, are unlikely to assuage activists’ concerns regarding proposed and existing public assembly laws in Kazakhstan.

Under existing legislation in Kazakhstan, organisers of public gatherings are required to obtain permission from local executive organs, something which is rarely forthcoming. Where permission is granted, it often comes after a long series of refusals, disrupting organisers’ attempts at planning. Protestors are also generally required to hold their demonstrations in inconvenient and out-of-the-way locations. Occasionally, activists carry out unauthorised meetings, which frequently end in mass arrests.

At the end of last year, Kazakh president Qasym-Jomart Toqaev signalled his intention to move from an authorisation system for public assembly to one based on notification. Kazakh society needs to be trained in the culture of public assembly and the responsible expression of its opinions, Toqaev stated at the time. The relevant draft law passed through the lower chamber of parliament and was approved by the senate during the first reading on 30 April. However, the law has been criticised both by Kazakh citizens and by international human rights organisations.

Critics argue that the actual procedures behind the new terms “notification” and “request for agreement” amount to an authorisation system in all but name, since “agreement” can still be refused on a number of legal pretexts and organisers are not permitted to advertise their event before receiving an answer from the local authorities (though there are set periods within which the authorities are to respond from the date of registering receipt of a request). Opponents also take issue with a number of points of detail, including the fact that individuals who have already been fined or arrested for violating public assembly legislation are not permitted to organise events (thereby ruling out the majority of activists in the country today); that the law retains provisions for gatherings to be held at designated sites only (often outside of the centre); and that it in fact sharpens maximum fines for violations (from $140 to $700 dollars) and extends maximum periods of arrest (from 15 to 20 days).