Keep it in the family

What lies behind Rustam Emomali’s meteoric rise to power? 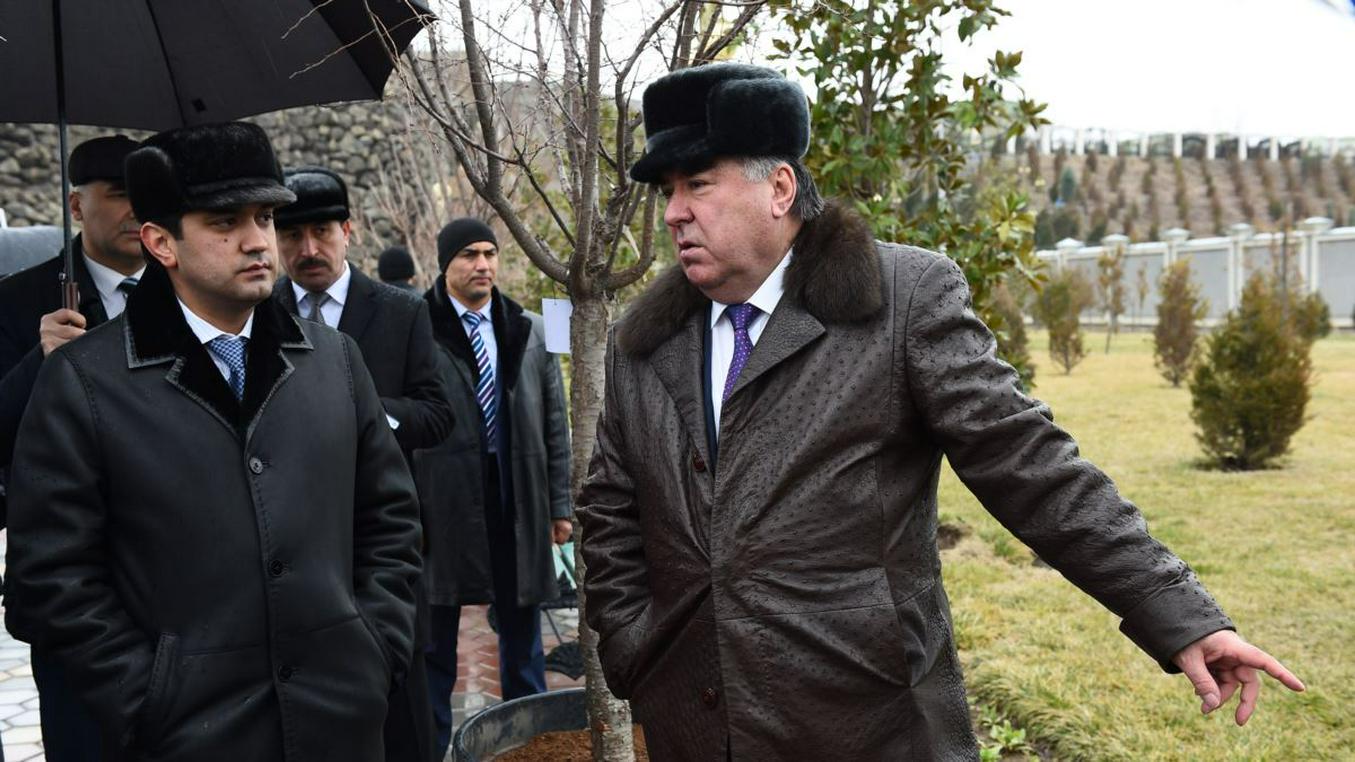 Emomali Rahmon with his son Rustam. Photo by the Press Office of the President of Tajikistan

On 17 April, Rustam Emomali, current mayor of Dushanbe and eldest son of Tajikistan’s president, was elected speaker of the upper chamber (Majlisi Milliy) of the country’s parliament. His candidacy received unanimous support following a vote by secret ballot. Occupying the position of speaker officially makes Rustam Emomali the second most powerful person in Tajikistan. According to the country’s constitution, in the event of the president’s death, resignation or incapacity, his authority is to be transferred to the speaker of the upper chamber of parliament until the election of a new head of state.

Until now, this privilege was held by ex-mayor of Dushanbe Mahmadsaid Ubaidulloev, who had occupied the position of speaker since the transformation of the previous single-chamber parliament into a two-chamber one in the year 2000.

For many years, right up until his replacement as mayor of the country’s capital city, it was Ubaidulloev who, not just de jure but also de facto, was the second most powerful figure in government. A member of the influential Farkhor clan, itself part of the wider Kulyab clan from the country’s south, he not only possessed authority among representatives from his own region but was also one of the closest people to Emomali Rahmon. Besides this, he was considered a man with powerful patrons in Moscow and someone even capable of challenging the president himself.

This reputation was firmly shaken in January 2017, when Ubaidulloev was removed from his post as mayor of Dushanbe. At the time, there were reports of a possible investigation into the politician’s activities during his time as city head. But then in March he was awarded a badge of honour “for the development of parliamentarism” by the chairwoman of the Federation Council of Russia, Valentina Matviyenko. Many experts interpreted this gesture as a tacit demonstration of Moscow’s protection of Ubaidulloev.

One political analyst from Dushanbe, speaking on condition of anonymity, told Fergana that Rustam Emomali’s appointment in place of Ubaidulloev is a sign of the final collapse of the “alliance” of Kulyab-based forces on which President Rahmon relied for his victory in the interregional conflict of the country’s five-year civil war (1992-1997).

“Mahmasaid Ubaidulloev’s exit from the political stage is the continuation of carefully-planned “purge” among the ranks of the Kulyab regional leadership. This will undoubtedly weaken support for Rahmon in the south of the country and open certain possibilities for the existing opposition and for the appearance of new groups who are unhappy with his policies, especially among people from that region,” the expert suggests.

A new stage in the transition of power

The Tajik authorities themselves apparently have no such concerns. Dushanbe is methodically pressing ahead with plans for a transition of power which were first laid in 2016. That year, a number of amendments were made to the country’s constitution – the minimum age for presidential candidates was lowered from 35 to 30 (Rustam Emomali is currently 32 – Ed.), and the current president was awarded the title of “Leader of the Nation”, allowing him to run for president an unlimited number of times. 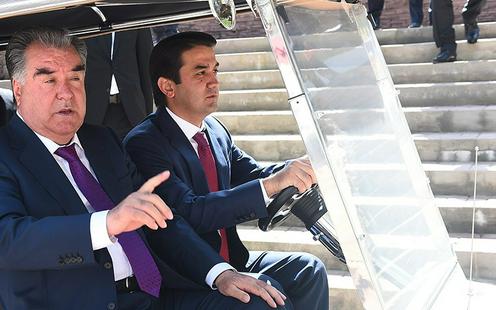 Emomali Rahmon with his son Rustam. Photo by the Press Office of the President of Tajikistan

Meanwhile, Rustam Emomali was given the chance to cut his teeth in various state institutions with the aim of improving his administrative skills. Prior to his appointment as mayor of Dushanbe, Emomali headed the Agency for State Financial Control and Combatting Corruption, the Customs Service and the Committee on Investments and State Property, and he continues to serve as president of the Tajik Football Association. But it is above all in his role as mayor of the country’s capital city that he has made his mark. During his time in office, a number of architectural and beautification projects have been carried out, sports facilities and playgrounds have been built, and citizens’ complaints have received speedy replies, alongside a number of other innovations that have appeared in Dushanbe under his leadership. Critics assert that the authorities are deliberately curating Rustam Emomali’s image as a successful administrator in order to bolster popular support ahead of a future presidential succession. Yet the mayor’s personality remains something of an unknown for the public since he does not often make appearances – he does not meet with the city’s residents or with journalists and does not make public pronouncements.

The Kyrgyz political scientist Nargiza Murataliyeva argues that the script for regime consolidation is a predictable one, but that the resilience of the regime is not a foregone conclusion:

“In a short and medium-term perspective, the regime demonstrates a high level of resilience: opposition parties are under pressure, the ruling People’s Democratic Party of Tajikistan dominates the political landscape, and Rahmon can lean upon a system of patronage, a judiciary and media that are fully under his control, plus the all-powerful security forces. The authoritarian system of government, however, does not guarantee that such effects will be maintained in a long-term perspective. The political system in Tajikistan contains a whole array domestic political risks and imbalances against a backdrop of ineffective state institutions and a high level of corruption. Authoritarian regimes also lack a pluralism of opinion, which means that there are no mechanisms for elaborating and implementing the kind of non-standard, creative decisions that can be highly effective in a crisis. Besides this, the coronavirus pandemic and its accompanying economic crisis will serve as a sort of stress test for the Tajik regime and its weak economy,” she says.

Tajikistan is still yet to report any official cases of coronavirus infections, and the widely-reported deaths in recent days and weeks are being attributed by the authorities to ordinary pneumonia resulting from cold weather conditions. While it is impossible to say for certain whether COVID-19 is present in the country or not, the negative impact of the virus on the Tajik economy is clear, given its dependence on imports and migrant labour remittances, which may equate to up to 40% of the country’s GDP. For this reason, the worsening economic situation in Russia and China will have a direct effect on the economy in Tajikistan. At the same time, Western financial institutions have become increasingly reluctant to supply Tajikistan with credit in recent years on account of the country’s inefficient government and high level of corruption.

“At present in Tajikistan, the three key positions of power – head of state, head of the upper chamber of parliament and head of the presidential administration – are in the hands of one family (Emomali Rahmon’s administration is run by his daughter Ozoda – Fergana). Besides this, all of the economic assets and profitable spheres of government are distributed among the members of the first family and their relatives, and, with the extension of the family monopoly, the fight for the remaining assets will intensify,” argues the political scientist from Dushanbe. 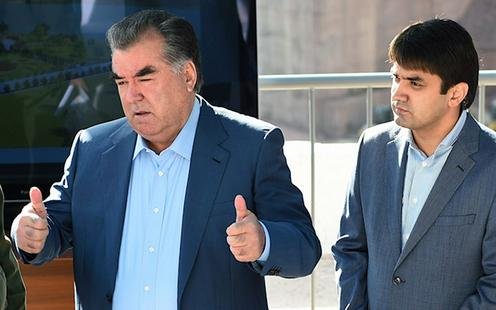 Emomali Rahmon and his son. Photo from the Press Office of the President of Tajikistan

In the present system, the single dominating figure is the president – all of the country’s political institutions are tied to him. The head of state is simultaneously the head of the government and appoints all ministers and their deputies and the heads of district and municipal administrations. In the lower chamber of parliament, his party has 46 seats out of 63, and the remaining parties are part of the systemic opposition, fully under the control of the regime. 8 of the country’s 33 senators are also appointed directly by the president. The risk with such a system is that, in the event of a worsening economy and a drop in the standard of living of the public, it is the head of government who bears responsibility for the decline.

“Despite the absence of an opposition in the country, the authorities are scared of any expression of discontent and are carefully examining all possible paths towards a transfer of power. Of course, the most straightforward means for this would be elections that would legitimise Rustam Emomali as president. But I don’t think Rahmon will step aside during 2020. He is too fond of power and will remain in charge for as long as he can. But, as an insurance policy for the family, he will bolster his son’s unassailability within the political system as far as he possibly can,” the expert assures.

By various means, the Tajik electorate is denied any direct influence on the political process. There is no true political struggle in the country, and the electoral system lacks transparency. It is commonly assumed in Tajikistan that everything is decided from Moscow, which supported Emomali Rahmon during the civil war and still retains the largest Russian base outside of the Russian Federation in the country. Nor do people ignore the influence of China, which has become Dushanbe’s main source of investments. Both Russia and China are likely to be interested in maintaining the current balance of power in Tajikistan.

“We know that one of the factors behind a country’s GDP growth is the ability to attract investment. According to data from the World Bank, in 2019 China’s share of total direct foreign investment in Tajikistan came to 75%. Given such a foreign investment structure, China knows that it could, in theory, come to an arrangement with any potential leadership in the country, even a new one. But at the same time, for foreign players, not including the West, in practice it is convenient to maintain key regime figures in their positions, since this guarantees the automatic extension of existing obligations and agreements,” says Nargiza Muratalieva.

The Russian political scientist and orientalist Aleksey Malashenko also argues that Moscow has an interest in maintaining the status quo: “Whoever is in the seat of power in Tajikistan, the main thing is to keep ties close, bring the country into the EAEU, and make sure things don’t change. Politicians in Moscow grow accustomed to the same faces with whom they can continue to work in the future, and if someone new comes along then it raises alarm,” he says.