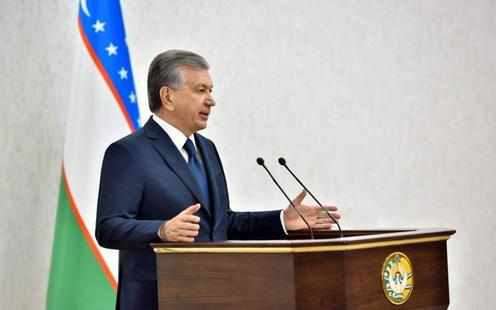 Uzbekistan’s Special Republican Commission for the Fight against the Coronavirus is to review the level of infection risk in the country and sharpen lockdown measures in specific regions. Uzbek president Shavkat Mirziyoyev has tasked the Commission with carrying out this work in the course of 24 hours, the press office of the head of state has announced (in Russian).

According to Mirziyoyev, Uzbeks have failed to understand the rationale behind the easing of lockdown measures and mistakenly thought that the threat from the virus has disappeared. Many people have stopped wearing medical face masks and maintaining a social distance, and have started to organise crowded events at their homes. Such a lack of vigilance, the Uzbek president said, could cancel out all the hard work done so far in restricting the spread of COVID-19 and the trillions of soms of budget money that have been spent.

After seeing a steep drop in the number of (officially-registered) active cases between 20 April and 9 May, numbers of new infections have risen again in Uzbekistan over the last two weeks, at the same time as the government has moved to gradually reopen the economy – the rise has not, though, been as clear as in Kazakhstan and Kyrgyzstan.

Like its neighbours, Uzbekistan has adopted a differentiated approach to the easing of lockdown measures, dividing the country up into red, yellow and green zones with different regulations according to the severity of the situation. Given the relatively low number of official cases in Uzbekistan, the red category includes all cities and districts where new cases have been detected in the last two weeks. Over the last 10 days, particular hotspots have been Navoiy (57 new infections), Samarkand (73), and Tashkent and the Tashkent region (114). 40 towns and rural districts remain in the red zone, 45 in the yellow.

Mirziyoyev underlined that the situation has been exacerbated by the extensive spread of the virus in other countries. To date, 47,000 Uzbeks have returned to the country from abroad, many of them infected with the coronavirus. Nearly half of all registered COVID-19 cases in Uzbekistan, he stated, have been returnees from abroad. In the coming days a further 3,500 citizens are expected to return by charter flights and another 7,000 through the country’s land borders. Over 100,000 more Uzbeks, Mirziyoyev said, have applied to return to the country.

At the same time, Mirziyoyev cited some more positive statistics showing the extent to which lockdown measures have been eased. 19,000 industrial enterprises in the country have resumed operations (91% of the total number), along with 9,000 construction firms (76%), 45,000 shops and stores (44%) and 51,000 service sector companies (52%). Tax and customs receipts have risen by $22.7 million in May compared to the equivalent period last month, and banks have increased loan provision by 13%.

Uzbekistan introduced its first lockdown measures on 16 March, following confirmation of the first official COVID-19 infection in the country. Borders were closed, as were schools, non-food stores and cafés and restaurants. Public transport was suspended and even private vehicle use banned for a time. Moves to gradually reopen the economy have been going on for around a month.

As of 27 May, Uzbekistan has reported 3,355 infections and 14 deaths. Testing is reported to be at the level of 13,764 tests per million, below that of low-testing European nations such as Sweden and the Netherlands, but significantly above that of South American nations and Japan.