Uzbekistan extends lockdown measures until 10 May 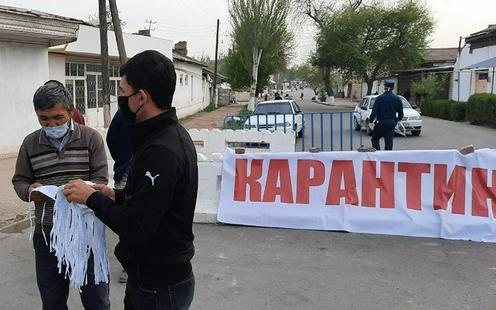 Photo from the press office of the Tashkent region administration

The current lockdown measures in place in Uzbekistan, which were due to expire on 20 April, have been extended until 10 May. The news was announced on the Telegram channel @koronavirusinfouz (in Uzbek), citing a decision by the Special Republican Commission to Fight the Spread of the COVID-19 Coronavirus Infection.

The Commission’s statement adds that the set of measures previously implemented by the country’s government, together with “the public’s conscious adoption of ‘self-isolation’ and observation of the principle of ‘social distancing’ have allowed the spread of the infection to be brought under control”.

Under existing lockdown measures in Uzbekistan people are not allowed to leave their homes except to buy food and medication, visit a doctor, or travel to work. All those who leave their homes must wear face masks. Those caught outside without a mask risk a fine of 1.1 million soms ($109; nearly half the average monthly wage) and those who venture out without a valid reason can be fined up to 6.6 million soms ($650; nearly three times the average monthly wage). In theory, if the actions of someone found guilty of violating anti-epidemic regulations result in a coronavirus death, that person can be jailed for up to ten years.

Public transport has been suspended and private vehicle travel is allowed by special permission only.

Kindergartens, schools and universities will remain closed until 10 May. Schoolchildren are being encouraged to follow televised lessons.

According to the latest information on 19 April, Uzbekistan has 1,543 confirmed cases of the virus and five deaths.