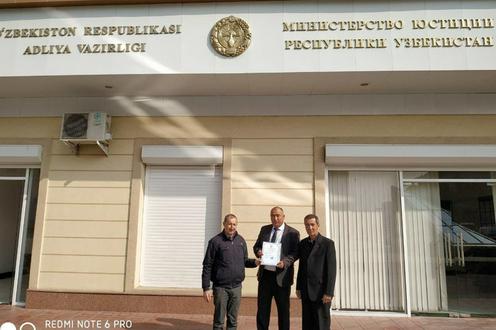 As the registration document states, the main aim of the organisation is to work for the promotion of human rights and the development of civil society in Uzbekistan.

Former Human Rights Watch Central Asia specialist Steve Swerdlow and rights advocate Azam Farmonov, one of the leaders of Hukuki Tayanch, told Gazeta.uz that the organisation had succeeded in being registered as a NGO at the third attempt.

The justice ministry has also registered an Uzbek branch of the American humanitarian organisation Mercy Corps, whose office in the country was closed down more than 10 years ago.

Two important themes of the Action Strategy for 2017-2021 that Mirziyoyev proposed in February 2017, and which is widely regarded as his blueprint for liberalisation in the country, were the promotion of civil society and the expansion of public-private partnerships through the medium of NGOs. While many observers have praised a number of legal amendments making it easier for NGOs to conduct their activities, it has also been noted that liberalisation has been slower to touch organisations dealing with political issues and human rights.

International human rights organisations have reported on how the Uzbek authorities have continued to obstruct the work of human rights advocates in the country. Together with fellow rights advocates Agzam Turgunov and Dilmurod Saidov, in February 2019, Azam Farmonov handed in an application to register the organisation Restoration of Justice, but the following month the application was rejected on the pretext that they had failed to correctly observe the registration process.

In May 2019, Amnesty International, the Association for Human Rights in Central Asia and the Norwegian and Polish Helsinki Committees, along with other rights organisations, called on the Uzbek authorities to end their persecution and intimidation of Agzam Turgunov and Dilmurod Saidov.

Agzam Turgunov was arrested in July 2008 and later sentenced to 10 years in jail on extortion charges. Human Rights Watch called the sentence politically motivated. Turgunov continued his human rights work in jail, advising fellow inmates on how to obtain reductions to their sentences. He was released in October 2017.