Asia-Plus journalist beaten up for second time this month 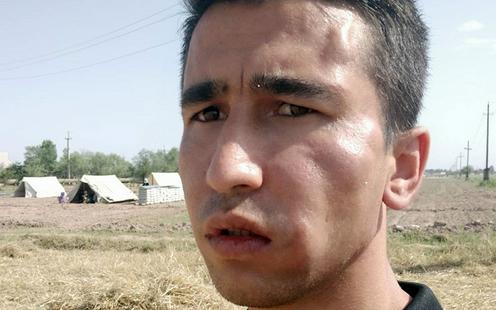 Tajik journalist Abdullo Ghurbati (also known as Avazmat Ghurbatov), who works for the news outlet Asia-Plus, has again been attacked by unknown assailants, this time while filming a story about the recent flooding in Tajikistan’s Khatlon region. The latest incident is covered on Asia-Plus (in Russian).

The first attack on Abdullo Ghurbati made headlines earlier this month after the journalist was set upon by two masked men near his home in Dushanbe on the evening of 11 May. The men reportedly approached Ghurbati and, without any kind of verbal altercation, began to hit him. When he started calling for help, they fled. None of his personal belongings were taken. In the period leading up the attack, the journalist is said to have received threatening phone calls, and a video appeared on social media labelling him a traitor to the nation.

The latest incident occurred this morning, 29 May, while Ghurbati was visiting the village Uyali in the Khuroson district. The journalist was standing beside a tent for local residents who had suffered from the flooding when a car pulled up with three men inside. One of them reportedly stated that he was the head of the village council. “They verbally abused me and accused me of stirring up trouble. I introduced myself and explained that I’m preparing a report on those who have suffered from the recent flooding. Suddenly one of them struck me hard in the face. The blow was totally unexpected and I fell over. The unknown man then continued to attack me,” Ghurbati recounted. The three men quickly returned to their vehicle and drove off.

The Tajik interior ministry told Asia-Plus that they would look into the matter and find those responsible. The police have previously opened an investigation into the first attack, but the interior ministry has now stated that CCTV footage of the attack is not clear enough to identify the licence plate of the car by which the two masked men arrived on the scene.

Abdullo Gurbati has worked as a journalist for Asia-Plus for over a year. Among his work are reports on “press gang” raids on private homes to complete military conscription quotas and on rising food prices. He has also covered the work of medical facilities in connection with the country’s coronavirus epidemic. Prior to this he worked for Tajikistan’s Centre for Investigative Journalism.

In the latest press freedom rankings published by Reporters Without Borders in April this year, Tajikistan was placed 161st out of 180 countries. The NGO points to increased pressure on journalists on the part of the authorities. Combined with an economic crisis, this has led to the closure of the majority of independent media outlets, increased self-censorship and the emigration of journalists abroad. “Harassment by the intelligence services, intimidation and blackmail are now part of the daily routine for the journalists who have stayed behind, and some have reportedly been blacklisted as ‘terrorists’,” the report states.